First year in karting and I’m trying to fully understand gear ratios. On the track I run at I’m running 16/62 = 3.875, talked to one of the regular leaders today and he runs a 15/57 = 3.8. Can you tell me the pro’s/con’s of both ratios? I’m a rookie so I assume this helps me get out of the corners, but I’m 0.400 off of leaders pace, wondering if it’s worth trying the different gearing and see what happens.

It’s always worth trying different sprockets. Yes a smaller ratio will pull you out of corners faster, but at the cost of top end along the straights. You have to experiment and find the balance that gives you the best time.

It’s usually preferable to run a smaller* front sprocket to let you run a smaller rear to get the same ratio, particularly if there are kerbs you’re bouncing over, smaller rear sprocket gives you that extra bit of clearance reducing the chance of throwing the chain off when it hits the kerb.

Yes a smaller ratio will pull you out of corners faster, but at the cost of top end along the straights.

Actually that is backwards. A larger gear gets you out of corner faster. 1/1 would mean tire revolves once per engine revolution. At 3.8 the revolves 3.8 times per each revolution of the tire. Effectively give 3.8 times the horsepower to rear wheels.

A 16 tooth is theoretically for efficient than 15 tooth. As front diameter of sprocket approaches 0 the front can not apply force because pulling from center of shaft instead of at a radius. The difference between 15 and 16 is tiny but not zero. On the other hand smaller rear is slightly lighter, less risk of hitting ground, etc. Still tiny difference. So basic difference is competitor would have slightly higher top end and slightly less acceleration using 3.8 compare to your 3.875

Yes sorry, I should drink coffee then reply

Any gear set, with the same ratio, should, theoretically, get you out of the corners exactly the same. Your engine should be turning the same RPM at the end of the straight. Some will disagree, but the numbers are there. I’m going with the numbers.
Some will say; “go with the biggest sprockets you can”.
Recently, it’s been reported that people are winning races was smaller gear sets, much smaller. Axle gears smaller than generally available. The court is out on that. lol
I’m including a gear ratio chart so you can compare. 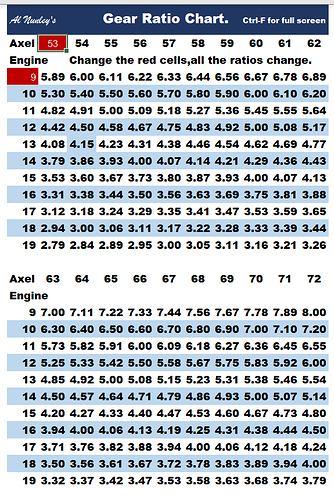 A 16 tooth is theoretically for efficient than 15 tooth. As front diameter of sprocket approaches 0 the front can not apply force because pulling from center of shaft instead of at a radius. The difference between 15 and 16 is tiny but not zero.

Let me clarify a little. There is a theoretical difference. On the other side the slightly more friction with 16/62 versus 15/57. So more loss. All of that type of these differences are so small that you will never see the results on the stopwatch where it manners. Gear ratio is really only consideration. Do you think you need a little more top end then going to 15/57 will increase the top end a little. But I have no way to know it is a better choice than 16/61

Appreciate the info, gonna just run 16/61 and see how it goes

Not that I can actually say I’ve looked for this particular subject on chain manufacturers websites, but I’ve never seen any specification on power loss with different gear sets. Do you have any references I can access?

In previous discussions, here on Bob’s, the “different gear sets are faster” crowd says you don’t actually pick up RPM on the top, you pick up speed between the low end and the high-end. Hard to argue with that (actually impossible) kind of information. Especially if the person giving out the information wins races. Hard to argue with success. Seems there are people who can “intuitively” feel the need for a gear set change. “Gear set change” not a “gear ratio change”.
Even stranger, I’ve read stories of people going to a smaller gear set (same ratio) and going faster.

Gear train losses are present in every vehicle in the world, no machine with moving parts is 100% efficient - losses can be calculated if that floats your boat

The transmission losses in a kart are extremely small pretty much limited to - axle bearings and gear chain friction. Does a gear set with 80 teeth suffer more friction loss than a gear set with 77 teeth? Yes it does, is the 3 tooth difference quantifiable? Not without some very expensive equipment no. The only time you’ll notice it realistically is with bambino karts - their engines have so little power (obviously) you can give your lil guy the edge with something as simple as spraying the chain with WD40 after you’ve applied the chain lub - it dilutes the chain lub so it’s less sticky. Try it one day on a stand with the motor running - you’ll notice RPM pick up slightly with the WD40 going onto the chain.

Bottom line is experiment with gear sets that make YOU faster. A gear set that makes you faster might not make your buddy faster because he or she has a different driving style. I higher ratio gives you more torque out of corners - but to harness that you have to be smooth on steering and power, if you’re not you’ll oversteer everywhere and go slower. My team actively encourages us to practice with higher than optimum ratios to train us into a smoother driving style.

Not that I can actually say I’ve looked for this particular subject on chain manufacturers websites, but I’ve never seen any specification on power loss with different gear sets. Do you have any references I can access?

I do not. I have quite a bit of physics in school and as electrical engineer will be often accused of thinking I am a mechanical engineer.

Think of a unrealistic gear of 4 to 4. When chain comes on the gear the link folds 90 degrees, rides around the gear and then unfolds 90. If 40 to 40 the link only folds 9 degrees, rides around, and unfolds 9. Friction of folding and unfolding is small but not zero. Advantage 40:40. The 4:4 is smaller so has less weight and less weight at larger diameter. So it has less rotational inertia. Small difference, but not zero. Advantage 4:4. There are some other losses also, but struggle describe them well.

Still all these really amount to nothing in my opinion unless maybe large track (enduro) racing. Even there I do not know if the 4:4 or the 4:40 advantages win out

I think that angle is called the “chord”. I had a spreadsheet showing the curve of those accumulated angles. It was almost parabolic in shape. The curve went from 8 teeth to something like 100 teeth. The angle gets smaller each time you add a tooth, but I’m sure you know that. Quite large at the start, but gets progressively smaller as a tooth count goes up.
Just recently I read of a person winning a race and in the pictures it showed he had a very small driver and driven gear. A dirt oval race was where the pictures were taken. Pictures were not very clear, but to me, it looked like the axle gear was smaller than 53 teeth.
So this got me to wondering, what’s the bigger loss, the chain folding around the sprockets or the chain speed? The need for further research is indicated… agreed?

So this got me to wondering, what’s the bigger loss, the chain folding around the sprockets or the chain speed? The need for further research is indicated… agreed?

I had not thought about the chain speed and acceleration. Interesting. I was not familiar with the term chord. The class I run now specs the front gear. So I do not have to worry about it. Still I think those variables even if I had the choice are result in much smaller gains than a lot of areas I can attack. But it is an interesting thought exercise

Just occurred to me that bicycle racing might be a good route for more data on how (or if) respective gear sizes impact power output.

Drivetrain Efficiency: What's The Difference In Speed Between 1X and 2X? -...

The most efficient bicycle chain runs in a perfectly straight line, in fact, a drivetrain without gears (singlespeed) can operate with 97% efficiency. The result is that 97% of the power that you put into the pedals goes into driving your rear wheel....

n.b. The chain angle they talk about here is basically the misalignment of the sprockets.

I’m taking some liberties here, but they are talking about loss difference of the order of 6 watts…
Which is…

What about rotating mass? A larger Drive Sprocket weighs slighter more than the next smaller. The larger Driven Sprocket needed for the same gear ratio weighs slightly more. The larger diameters of said sprockets means their respective center of masses is further away from the point of rotation (crank or axle). Having larger masses further from the rotational axis means more energy is required to accelerate them. Additonaly it may require a longer length of chain to accommodate a larger sprocket pairing that would also increase the mass being moved. I am not saying it would be a huge difference, but if everything else were identical then theoretically you should see that a setup with larger sprocket combinations would accelerate slight slower than one with a smaller sprocket combination of the same gear ratios.