Lol this is a nice convercation

Rather than ridiculing people doing things with karts I prefer to applaud them, it’s easy to forget how infinitesimally small the world of competition gokarting is. Gokarts and karting are many things to many people. Nobody cares about the small world of competition karting except us

I like to think we’re building a community of people here that respect the effort of anyone that’s doing “cool stuff” with gokarts.

Oh didnt think about that, Every racekart i have raced was Like 45 55 mm but maby on rentals and normal karts

In the 30mm range you’ll find anything from 90HP Superkarts, unlimited outlaws, four strokes and rentals. 40mm went away for a while and has seen a bit of an uptick of late. There was a period of time where CRG had a 45mm, but it was only for a short period of time… and a long time ago.

Outside of that, 50mm has been par the course for higher powered classes (Sprint racing) since mid to late 90’s.

Pics or it didn’t happen.

40mm went away for a while and has seen a bit of an uptick of late.

Human ingenuity constantly amazes me. We seem to be drawn to making dumb but fun things like moths to a flame.

It should be noted axles generally aren’t allowed to be more than 50mm in diameter (it’s not explicitly written, but can be argued from this table). This is taken from CIK rules, but it’s something often copied into other national regulations. 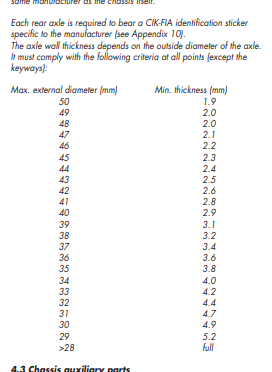 Also 30mm axles are probably the most ideal axle size for most projects. Cheaper than the 40/50mm, generally thick walled or solid which I suspect makes the less liable to snapping. As James said it’s probably the most used axle size on the planet when you include all kart types.