We’re really going down a rabbit hole on air density again, so I’m going to portion off the deeper discussion on that.
“Portion off”. What does that mean? Does that mean you deleted my post?

It means the topic was split. If you scroll up you’ll see there is a link to the new topic where the split was made…

There’s also some responses from dom on there.

Oh, I watched that video a few days ago. I thought Matts line was fairly okay, then this guy, just killed it, every corner, every time. Looks so simple when you watch him…

Yep. The difference in corner entry is big.
And the host did a nice job too!

@Stacker @Bobby Here’s a fun and very dirty rental race me and my son did yesterday. Since you guys drive rentals, I thought you’d enjoy. I’m sure its much the same in your neck of the woods. Oh and @StrikerClone is in this too but he got one of the stinker karts for the finals so he got stuck in back.

Our results were pretty interesting and just goes to show how much is down to the kart:

Nick’s is a fun watch. He gets in the lead pack and deals with some crazy driving going on around him.

I get a little slower kart but get a nice view of all the fun!

Interesting thing I saw looking at laptimes. So the pack that Nick was in clearly had powerful karts. Let’s assume that Nicks was representative of the potential speed of that pack. His fastest lap in the final was a 32.083. His average laptime was 32.846, however. The other two boys in the pack had similar averages to Nick but about a tenth faster. My fastest laptime was a relatively pokey 32.429 as compared to Nick’s best. But my average laptime was 32.676, a lot better than all of them. Their super inconsistent pace is because of all the contact.

The two kids in the most powerful karts slowed themselves down quite a bit fighting and blocking each other. As a consequence, Nick got by and up into first briefly. And me, in the slower kart, was able to steadily work my way closer and closer.

That is some very interesting race from Nicks point of view. Those two guys in front of him were really dirty, especially the guy in pink-ish colored suit. I also see that your lines differ a lot, I wonder which is actually better, as your karts were too much appart in terms of speed.

Oh, and I love that approval to

I think that pink helmet guy had fastest kart. Red helmet guy appears to be a more skilled driver who was in a slightly slower kart. I think nicks kart and red helmet were similar-ish with red a bit faster.
I think I understand nicks frustration. He legit got taken out from 2nd in the uphill chicane. He got tapped by red at turn in and then red broke his traction with a harder hit in the chicane.
That being said I think he did a good job of staying out of the blender.

Line wise, Nick was all over the place but I think that’s largely due to the traffic. My line was pretty good I think since I had open track. I definitely need to quiet down turn 1 though.

Oh man, that track looks so fun! Nick (assuming is you son) had some good pace and kept his cool well. You did pretty well yourself

Yup, That’s my Boy! Thanks for watching, Bobby!

There’s actually 2 pieces to it. Here’s the big layout from above: 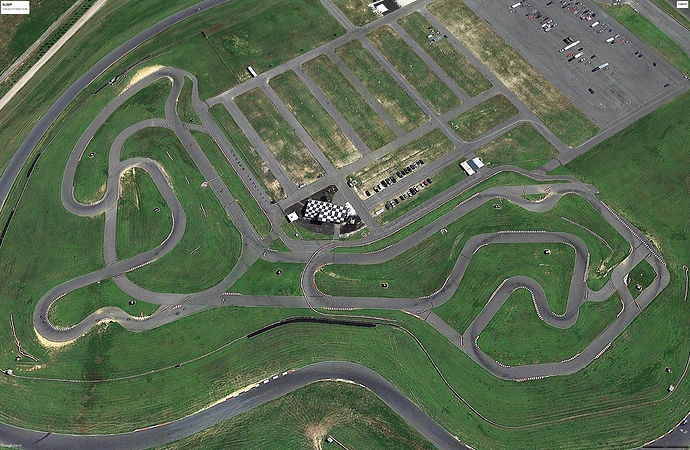 We’re on the right part that separately is called Liberator. The rental karts don’t have the grunt to do the interior bit so we run the outside part. 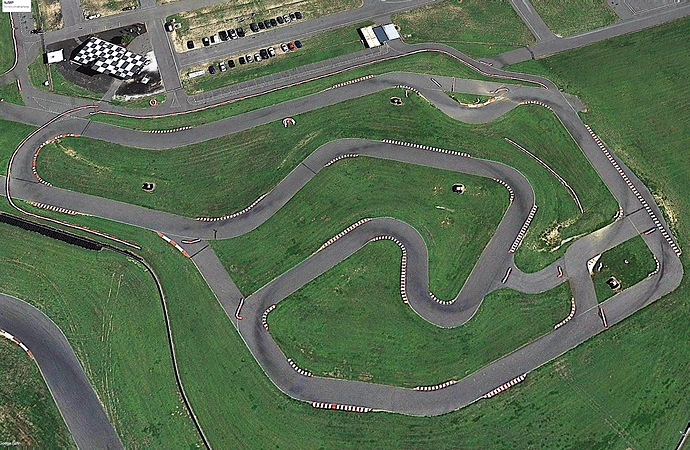 Since we are talking about the track. Having a look a this corner: 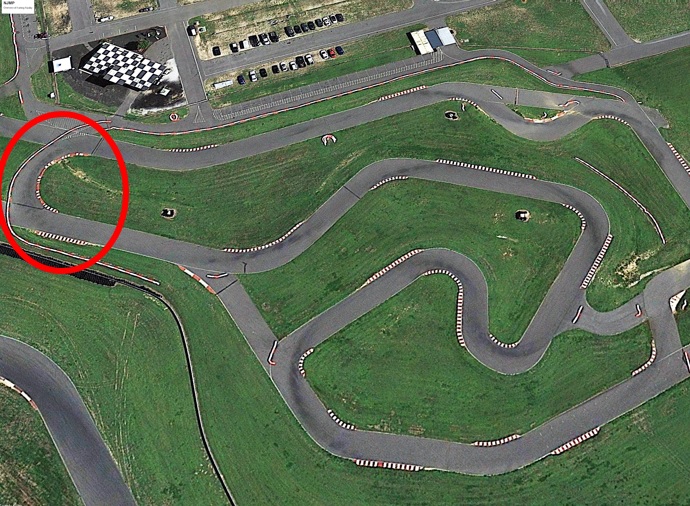 d7612e169ce37da8bb6f69e845b69e611cea1d12.jpeg690×506 186 KB
We have been discussing late apexes to get a good run onto the straight after the corner. The rubber shows that people are taking an earlier apex than I would’ve thought. Lets assume a qualifying session where defending a position isn’t being considered will the fastest way through a corner still always be where the rubber is or could the extra speed on the straight from a late apex make up for the lower grip?
Bimodal_Rocket (Dom Callan) September 1, 2019, 4:09am #216

Interestingly, I had the same question here in x30. I cant remember how long ago the thread was but basically, there’s not much benefit to a late apex. No real run afterwards of major consequence and not enough grip off the normal line.

The way the turn is angled is a bit funny, however. The approach on track kind of points you into the apex, which kind of tricks you into turning in too early (red line).

If you turn in too early, unless you dump speed, you will struggle for lateral grip as you try to run out.

Green line asks you to not be fooled by the direction the candystripe is pointing and delay the turn in. 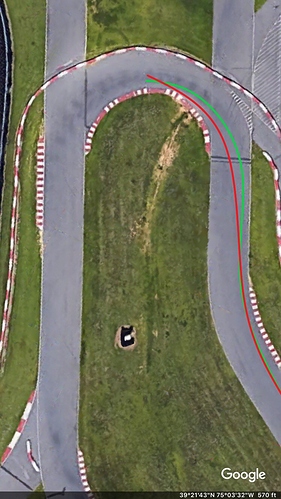 There are two similar corners in my local track that I have been trying to either early or late apex. I might just try following the wear marks next time and see how that effects times. I’m hoping to have my GoPro set up sorted before I go next time so I can get some footage.

If its any help, going with the rubber is the best bet. I have found in sim and in real life that the ideal line is always in the rubber.

There is no way to answer the question about the late apex without asking ‘what type of kart’? A rental kart takes a much rounder line through a corner than a KZ kart for instance.

Sorry, yes a rental kart. That’s interesting about the rentals and rounder lines. I might be driving them too much like a car or more powerful kart still. I will try the corners with a rounder line next time I’m at the track and see how it works.

I think that’s a great idea, Bobby. The more I drive the rentals, the more it seems that it’s all about flow and momentum.

We have 2 cars here:

One is a 2 door fast sporstcar. Low, nervous. It just keeps begging you to dig as hard as you can.

The other is a weak 4-banger mid SUV. It’s not fast but it handles pretty good for such an awfully compromised design. It’s rolly, but does a good job of not falling over.

You can’t drive the suv like the sports car. If ya did, the car wouldn’t reward point and shoot driving. And, it might tip over.

In the end it’s ‘all’ about exit speed, but since rental karts have little power, maintaining cornering speed is the way to exit the corner fastest. You still have a later apex than a perfect circle, but not as much as in a KZ kart where traction and acceleration is vital.

So when examining the rubber, it’s important to understand what type of karts layed the rubber down. But the rubber on the track is the best start to determine the ideal line.

@Matthijs_Hofman take a looksie at this. How’s this for rental kart piloting? So smooth. So quiet. This makes me feel like a careless oaf! This is one of the fastest KK guys who races with the big boys, I think.

Still, when I see the onboard I feel that ‘I can do it too’, sort of. But take a look at his, it’s insane.