I remember a video for the 991 GT3 RS. Walter Rohrl (?) was lapping it and he was using his watch as a lap timer. I thought that was pretty cool. I’ve tried it and it’s pretty close, actually.

I agree with you, .1s, .2s ± on a 10 minute session sounds reasonable if you are alone on track of course or at least no one to interrupt. I was mainly working on this consistency whole year in comparing with last year, where I was pushing for fastest lap by one fast and one slow lap to cool the engine and tyres between runs.

I managed to do a solo session, with the fastestL 50.125 (L5) and slowestL 51.055 (L1) so .93 difference. That is this years best result. So a lot of work ahead but it looks promising as all the following sessions were under 2s plus/minus even with traffic, in comparing to last years 4-10s plus minuses.

@Stacker Just had a “level up” btw. In this session I saw my optimal drop to 45.7. Which is cool but more importantly I ran 10 or so 46s, one after the other, progressively lower, almost down to my best.
This makes the 46s the new normal and the 47s will be the minority going forward.

It sorta happened all of a sudden that I was able to run a bunch of fast (for me) laps back to back like that.

In this case I changed something in the beginning of the lap that kept me more tidy and opened up a better shot downhill.

I also realized that the fast sweeping right towards the end can be totally stable and even accelerated through by inserting a pause before the turn. There’s a mini straight right after it, too, making it important.

So, looks like we both had good practice sessions.

That is great to hear. Looks like you found few tenths at the start and that pushed you through the entire lap and gave you some boost through all sections. Sounds awesome!

So I managed to make a big difference in the beginning of the track and now have to figure out the last turn. @Stacker Any thoughts?

I am now able to run the first sector sub 16s. Full track optimal now 45.6. I am also seeing how to get on gas a bit earlier in chicane. But I am losing time here in this final turn relative to my peers. It feels OK and I think I am exiting fine. I must be very late to throttle, somehow, however. 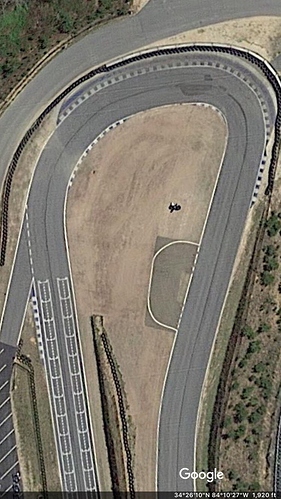 Very tricky one. I see a lot of elevation changes just in this small section.

Simple solution is to go for the late apex. It should give you nice amount of grip on the exit so you can power out earlier.

This can sacrifice the entry speed and as I have seen on quite a bit of footage from others (not the same kart but it does represent what can happen) it leads to quite a big gap on the inside, in terms of race. I have seen some spins there and bad moves so it might not be the best option.

Other option is to go to the apex “normally” and go wider on exit. I see there is a a big bump at about second inside apex. By normally, I mean just as any other corner, easy on the steering, regular, shortest line. 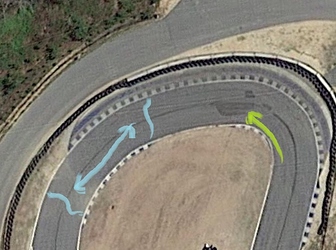 I think, if you are at the edge of the track before the bump, this could settle your kart quite nicely and keep your momentum. Going too narrow here doesn´t benefit you too much, at least that is what I think.

Let me know if you have any footage, I would love to see it, this whole track looks so fun!

Let me know if you have any footage, I would love to see it, this whole track looks so fun!

I think I’m sorta doing this: deliberately wide of the first bit. Maybe I should try coming down to that apex and letting the kart come off of it wide. So yeah I’m late apexing it to the point where I’m ignoring the first one! This may, in fact, be a problem. 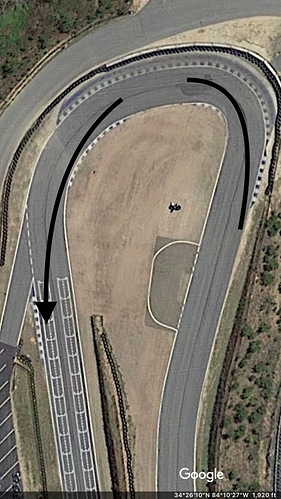 A possibility (but there’s a ton of speed here): 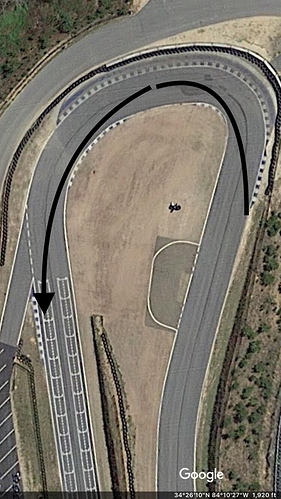 I think the second option is better. You should let the kart go to the edge of the track. Don’t turn that agressively at the end of the first line (you drew a black line and black line with arrow). Touch that kerb on the outside, try that. I think the following turn, where you hit the apex on the inside is not that sharp and it doesn’t need to be that tight. Going wider will give you much more speed and will let you carry much more into the first part of the turn (before it). At the end, I have never driven in KartKraft so yeah, I might be wrong.

Thanks. Talking out loud about it helped. I believe what you are suggesting is take the first apex and then let the kart drift out wide as you get back on it and then follow the momentum wide out, not necessarily hitting 2nd apex strip.

I think that perhaps you are correct that insisting that the kart gets down to the 2nd apex is probably costing me time. It feels a bit forced and, it’s hard to tell, but I think the rubber goes wide.

This turns out to not be a Line thing but rather a Braking thing, I think. Simply not rushing the corner and braking earlier works. I had some good results last night clipping first apex etc. There does seem to be rubber on the wide run out from 2nd apex strip to start/finish.

This is the last piece for sub 46. I ran a 46.005 last night and guess where I screwed up? Too fast in and had to emergency dump speed and got a bit messy.

So once again, speed will be found by taking stuff away. It always seems to come down to slowing down to speed up.

It always seems to come down to slowing down to speed up.

Good point. Everyone should work on that (I mean in karting, in general), rather than just pushing and finding the limit too late while losing time.

By the way. Great news about camera. It arrived yesterday in the evening and I drove a session this morning and filmed it. I will share the video after fixing the stabilization problem.

Yay. What did you get? For a camera without stabilization, I found that top front helmet mount works well. Mounting on the faring is very shaky and only works if you have a lot of motion reduction built into camera.

I have not tired but many image editing programs do feature a shake reduction control of some sort in post processing step.

A popular (free version) video editing program is called HitFilm. It is a very powerful program so perhaps overkill. But, it has a motion reduction effect.

(disregard how slow I am, please.)

That wobbling effect is crazy. What did you end up doing?

nothing yet. waiting for a deal on a gopro hero 7 black.

The 5 is the first of the good motion reduction. The 6 even better. 7 is overkill. 8 will drive the kart for you.

Craigslist an older one!

The camera in that video was a Contour Roam. But, I think i’ll go with the hero 7 black. I know what you mean about the stabilization being too good; but, i’m ok with that.

They got me an Eken H9R. It looks very good, video is great but I don´t see it has stabilization so that is a bit annoying. I am trying out programs to do the job, now I will try the HitFilm. I do mount it on top of the helmet, so steering as well as footwork is seen fairly nice. Hopefully it does the job.

Cool! Looking forwards to seeing it.

Here is the footage of my session yesterday:

It is shaky, I did´t manage to fix it, not sure how to correctly do it, that program you suggested me is very good but I am not sure how to maximize the stabilization yet.

About the laptimes, they were fantastic for the conditions. It was 35°C outside and the track itself, I don´t know but a lot. It was veery slippery. All the laps that I drove were about .5s ± to each other (with exception of first two for warm-up laps and one contact with tyres later in the session) and the fastest was 50.807s. Again improvement in terms of average time (from last time) but I was alone on the track, so that makes sense.

Let me know what you think about the drive and do you have any suggestions for such hot sessions, where tyres just slide around with no grip at all.

The sliding could be old tyres possibly? Or maybe tyres getting overinflated once they heat up due to higher track temps?
Nice driving by the way. I like how consistent it was. This is something I have to work on.