Help me spec out a new trailer

Hey everyone, sorry if this has been asked a million times, but I’m planning to order a trailer over the off season to have ready for the beginning of the 2020 season. Right now I’m hauling my son’s kart on a 5x7 open trailer, and loading all the extras in the back of the van. I’d like to have an enclosed trailer that I can dedicate to karting and not have to pack the van every night before a race (and subsequently forgetting to pack something).

So I’d like some advice, I was originally thinking a 6x10 or 6x12, but now I’m thinking I may as well go to 7x 14 or 16. Any thoughts on ramp vs barn door? I’m thinking ramp makes sense. I want extra height as I’m 6’3", what about electric brakes, aluminum vs steel frame on the trailer. Anything else I’m missing?

I’d love some pointers on this too. Trailerless is great for a while when I was single. But now with kids, Job etc packing/unpacking/repacking/unpacking gets a bit long in tooth

@Norcal_Karters wrote this a while ago…

I totally agree, at my son’s last race I pulled out my 10x10 canopy, only to realize I had the frame but not the canopy top lol. After that I really decided I need a trailer setup full time to karting stuff, so I can just hitch up and pull out.

When I moved to a trailer, I was thinking the same as you, just something to haul the karts in. My wife talked me into a 7x14 with V-nose. We’ve been in it for over 4 years now and has worked out great. It has extra height so my dad, who is 6’4" has no issues walking in and out of it. I added a fold-down table top bench that works great. 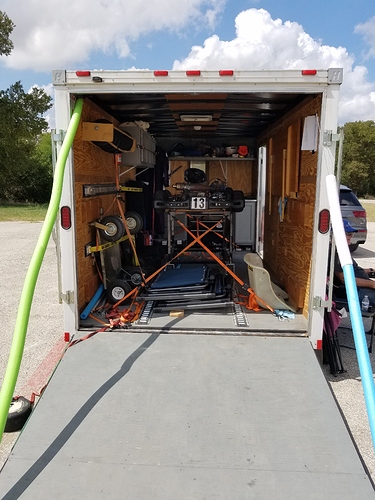 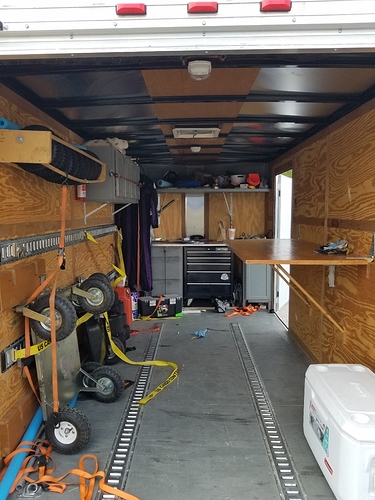 thanks for the insight. 7x14 seems to be a decent sweet spot for space but still easily towable. I was originally thinking 6x12 at most, because I was pulling with my van, but I just bought a truck, so I’m not so restricted anymore.

I use my brothers trailer. What is really nice is having every thing ready to go, in the garage in the morning. It is so nice to stop for breakfast in my car if I want & then head to the ‘Man Cavern’. All I do is open the main gate, go through the entrance door, open garage door and pull out reversing steps on the way out. It is a trailer he had and kind of has it’s appearance problems but is a luxury none the less.

What I’m looking for in the next one.
Bigger is nice. Not being jam packed just make it easier, especially when worn out. Sometimes you have to wait out a rain and having about 4’x8’ extra can really come in handy. Or you might have to move an extra kart. Too big has it’s issue but too small is worse.
Wide is nice. Tall is nice when in it and it is hot. make sure it has adequate roof vents. But if you haul distances I don’t know how extra height affect mileage.
I have the ramp and it allows me to load unload by rolling vs lifting. Ramps take room though & you have to walk around the cables. Also make sure you have the room where you are parking it. Ramps can be a trip hazard and slippery when wet. It also requires a degree of flatness & some accuracy in backing squarely at a specific distance, like when I want to just hit the edge of the cement apron.

I want extra height as I’m 6’3", what about electric brakes, aluminum vs steel frame on the trailer. Anything else I’m missing?

I’d say you want the extra height based on your height.

electric brakes could really come in handy, if added weight or a different tow vehicle. They only have to stop you one critical time to pay for themselves. It would suck after a day of getting passed by other karts having the trailer pass me on the way home.

I’d say steel would be cheaper.

The right insulation could go a long way in making it comfortable.

yeah I’d like to be able to comfortably stand inside. The brakes are a relatively inexpensive option, so I cant see a reason not to get them. I actually hadn’t even considered insulation in the trailer.

I’d be torn between buying the trailer done and finishing the inside myself. Options add up really quickly.
There are some thin insulations that work well. Low E reflective types seem they would be great in a trailer.

The 'Man Cavern" where we keep the karts had spray foam applied to the ceiling and it made world of difference. Two big exhaust fans were high in the back wall and 1 was running in reverse. When you walk in now it is not as hot and the fans effectively pull the heat out. I thinks the same concept would apply to the trailer. Living in NOLA heat is always a factor.

I keep a floor jack in the trailer. One day I noticed there was no plan “b” or plan “a” for dealing with a flat on the trailer.

You also want to to be able to tie everything down or to a wall. So think that out.

*what I think I want sometimes doesn’t I end up as ideal as I thought it would be.

I’ve looked at some used trailers. There are a few for sale in my area, but they typically want very close to new prices it seems. They definitely hold their value.

Some used items are quit the deal. Some are in the is the owner mental category for price.
Waiting out the deals isn’t always an option. Then new doesn’t have a stupid problem from a previous owner and generally more payment options.

I bought mine new when I did, and finished the interior myself. Wasn’t too bad. Also, the trailer brakes are the best to have, they make me feel as though I can stop better with the trailer than without. Definitely go with the brakes. As far as new or used, make sure a used trailer is setup the way you’d want it.

I’m sidetracking a little, but has anyone used a pop up tent trailer, transporting the karts on the roof?

I’ve never seen anyone put karts on the top of a tent trailer, but I have seen a guy bring his kids kart to the track on the roof of his Honda Civic.

If I were you I’d go for a rear door that lifted on gas struts for opening. It provides a modicum of protection if you are only in for a short while or whatever and allows you to get closer to the trailer with the kart stand.

I note a lot of the trailers posted above are basically box trailers. Around here that doesn’t seem to be the common theme and when I get a trailer I’d be going for something much more like this … 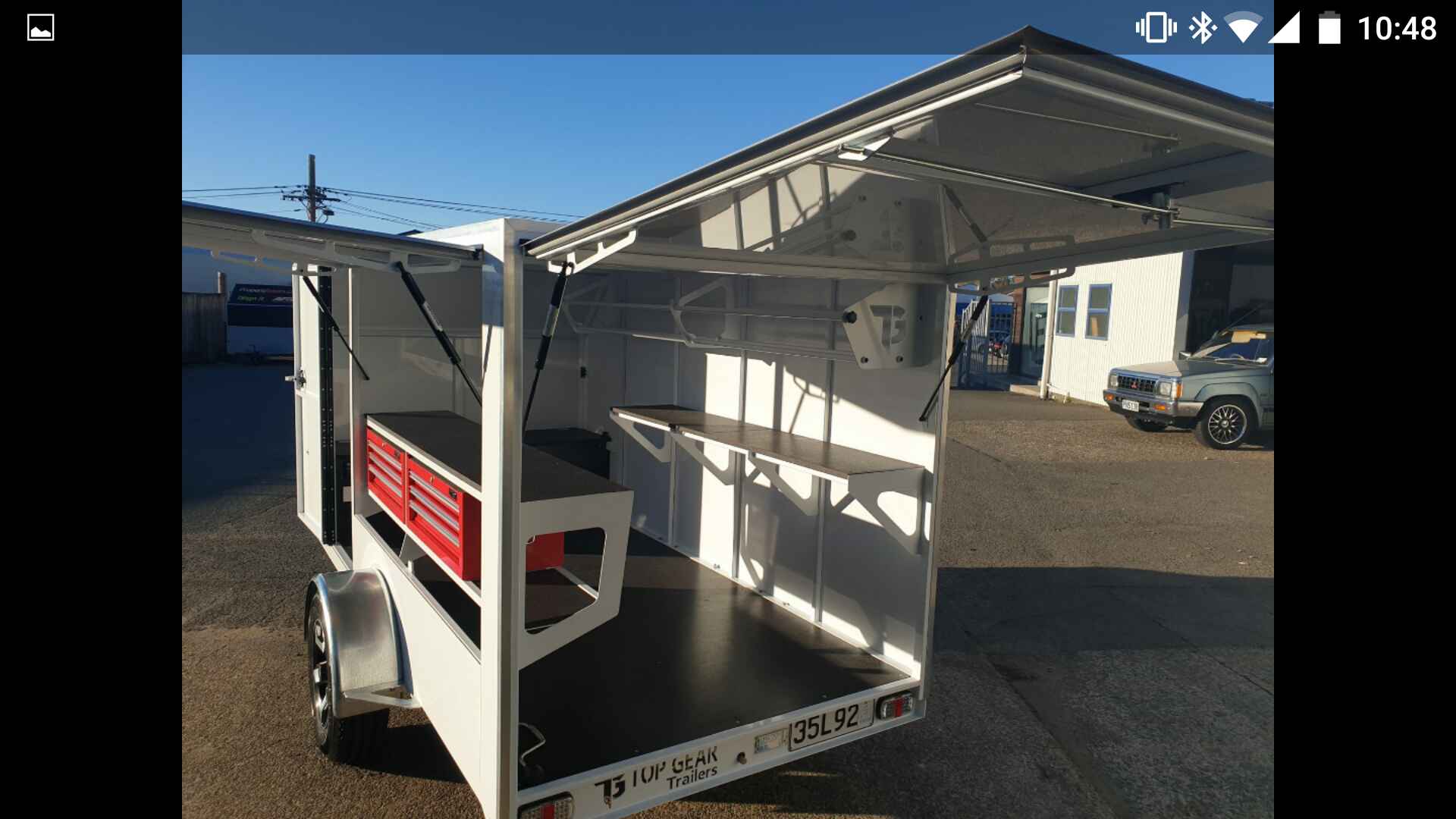 To make this decision I simply laid some painters tape in my garage floor in the various widths and lengths. In those measured out boxes I laid out all of my stuff, to include the karts and then said “can I live with this?”. In my case it was 2 Karts, Tools, Tires, Various other things I bring (like car tires that I sometime transport friends car tires to the autocross events I go to), etc. Having more room than I need turned in to “almost not enough” when I took two karts and all of our other crap to Lincoln Nebraska from NC to the SCCA Solo Nationals.

And here it is. Some White paint (High Gloss!!), some Black Rubber Coin Flooring and a few hours in to it has made it “mine”. There’s also some pictures of it loaded down for a week long trip to Lincoln NE. It’s worked out great.

Next I need to work on some wall storage and other things when I get time. 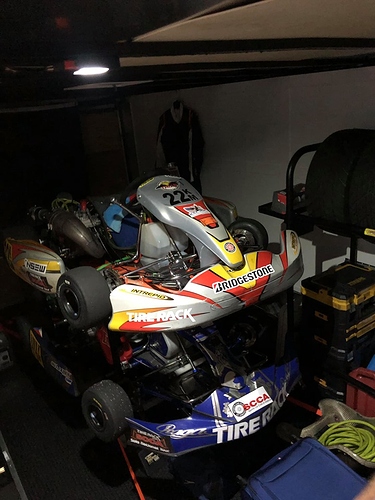 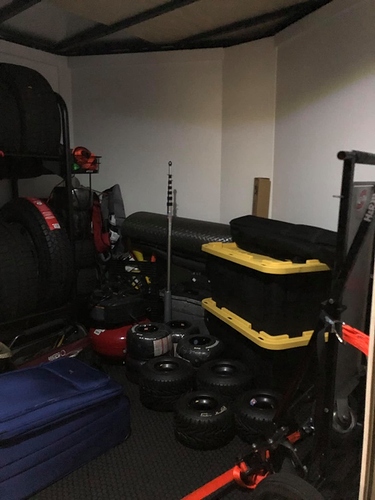 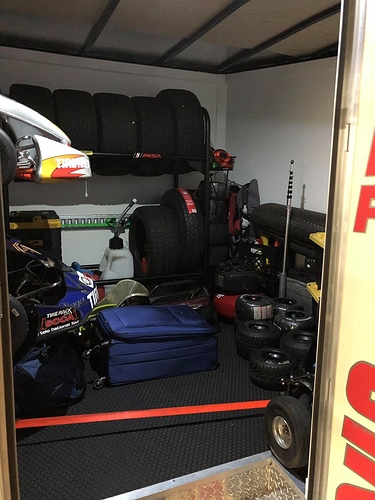 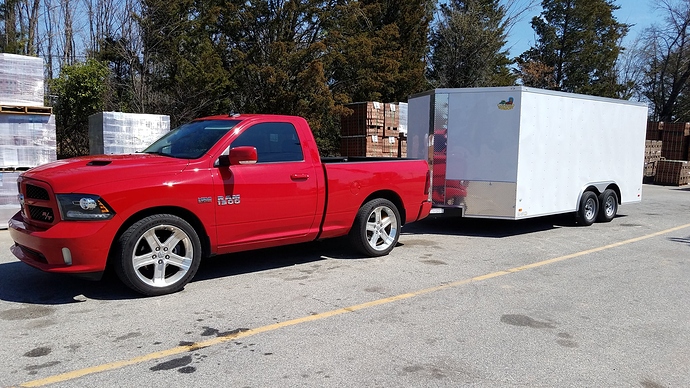 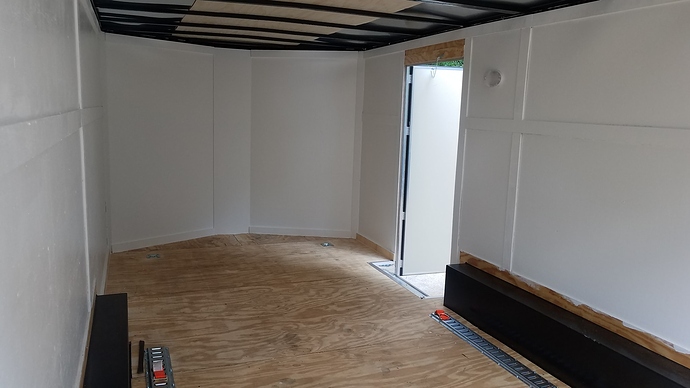 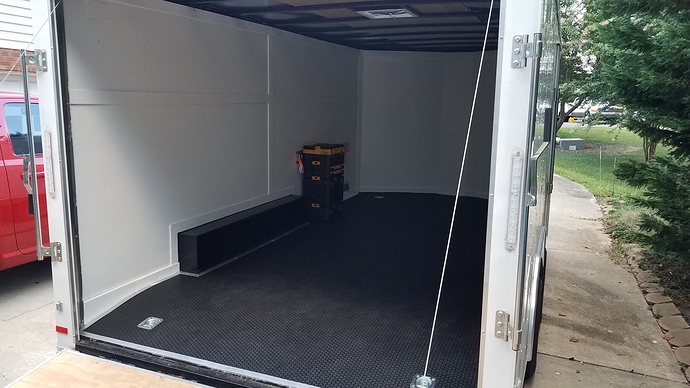