How big is the oval track sprint kart market? Dirt and Asphalt

Trying to get an estimate of the size of the oval sprint kart market in the USA. I did an estimate of the number of active racers in the sprint road course market in the Northeast a couple of years ago [see picture] which I estimate to be about 15% of the total US active or roughly 6,000-8,000 kart racer market for sprint road course racing. The above does not include hobby karters and I assume it is bit light because focuses on active racers – in the weekly results.

Now I am trying to figure out how many oval racers there are out there nationally. I would assume it is 3-4x if not the more than number of sprint road course racers with the majority being in the southeast, mid-atlantic, and midwest with a smattering in the other places.

What would be the organizations that sanction these events and track the numbers? Or any other references that might be able to establish the size of the market?

In the interest of full disclosure, these numbers will be provided to an Italian kart components manufacturer to understand the opportunity for 6" wheels catering to this segment of the market. 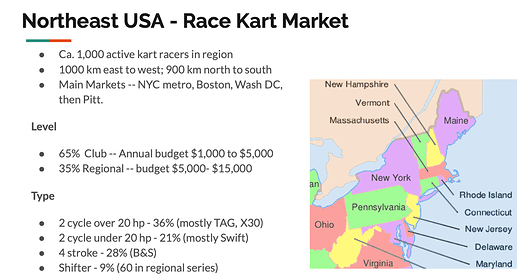 I’m not going to be much help however the oval market it very, very regional. In the Southeast dirt oval rules, here in the Midwest most of the dirt oval tracks have closed at least in Indiana.
Asphalt oval racing doesn’t have much of a foothold anywhere.

Paul, I know a couple kart kids from Maryland and apparently there dirt oval karting right next to their high school. So it exists in the NE apparently.

Thanks Dom. Yeah, when I lived in VA there was a fair bit of it. I also hear there is some in NY.

There’s an oval in MD at Sandyhook and Nicholson Speedway. There’s also King George Speedway - a few south of the VA/MD border. There are probably more out there, i’ve been out of that genre for decades now.

Dirt is a really hard one to nail down. I did a lot of research in 2015 for a track directory. Dirt tracks come and go a lot, also many of them (35%) or at least were missing from Google.

Here’s the directory, the UI isn’t fantastic but it is functional. Again the data is from around 2015/2016.

I should have a spreadsheet somewhere with the data.

You could try the orgs to get a sense of how many tracks are out there… They may not be very forthcoming with info, but it’s worth a shot. Try NKA, WKA and AKRA

Also, bob’s four cycle forums is the definitive dirt karting hangout for sure. If you haven’t already, I’d recommend looking and posting on there. www.4cycle.com
Bob’s is where I found a lot of the unlisted tracks

Here’s a map (Dirt only) from the directory…

Link to the page I used to make it: https://tinyurl.com/y83xsd9w

By contrast there were 17 paved ovals…

Wow. This is great info. Thank you.

By contrast there were 17 paved ovals…

I know there’s paved oval kart track in Monroe, WA (Not the Speedway) just west of the Evergreen Fairgrounds.