How do I carve through traffic?

At a recent race, three faster karts came up on a group of slower karts. I chose what I thought was the best path through these guys and ended up crashed out of the race. My question is, What path would you have taken? And why? Here is a link to the video:

Assuming this was your onboard, honestly, I don’t think you did anything wrong.
It was just more bad luck, if anything.

Now that guy who dove up the inside into the grass had me laughing, because he clearly panic locked up as the person in front came over and went for a ride through the infield.

I agree with Davin that it was just a bad situation. The leader almost got launched, so he cranked it right just as the blue bomber decided to ignore physics and pass both of you. Anyway, the thing I would take away is that slower drivers generally have bigger reactions to ‘unusual’ stuff (like a blue kart sliding through the infield at them), so as soon you saw the situation unfolding, you basically had three choices:

Gonna concur with the other guys. That tippytap looks like the fella just plain didn’t see you or was too focused on “sooo many people” and went into brain fart mode.
The guy who turned into you did end up in the grass, so lessons were learned that likely won’t be repeated.

Edit: just reread the question and you specifically ask if you took the “least worst” way through this? I’d say you did fine. Your position was fine for getting around them. The kamikaze inside dude freaked the slower pack out and they all kinda jigged left as a reaction to him shooting down the inside.
All told you would have quietly gone your merry way had the blue guy not suddenly tried to get away from a potential threat. He simply overreacted and turned left which was unfortunate for him and to a lesser extent, you.

What’s so interesting is look at the delay between the blue guy dive bombing and the reaction of the two slower guys that were inside of you.
That jig left he made was too late to do anything useful, the threat was already in the grass. What I think we are seeing is the delay of processing between stimuli and brain. It’s interesting how long the “turn and get away from crazy man” impulse took to get from his brain to his hands.

I think your better bet would’ve been to go completely to the inside. Obviously it’s easy to say that when I get the luxury of watching the video back a few times in hindsight.

When there’s a gaggle like that, I just assume I’m going to be going around the inside as you would on a typical overtake, so I’m always looking to find the open space on the inside. If sh*t goes sideways (literally) like in this video, the wreck is almost always going to wash up the track to the outside, especially in a high-speed section like this, so you’re going to want to be wherever the wreck isn’t going. My number one goal when avoiding stuff like this is identifying where the momentum is and where the pile of karts is going to end up, and then driving the opposite direction.

Of course, had you gone to the bottom you may have gotten launched over by the blue kart coming in hot. This is racing so sometimes you make all the right choices and you still end up in the grass.

Yeah there’s not a lot you could have done once you were in that situation, you could have given yourself more room on the right by going to the outside, but then you could have ended up in the grass with a drop in grip out there.

Otherwise, you could have approached the turn on the inside I guess, but I think the driver mowing the lawn really threw thing off for everyone in the group. 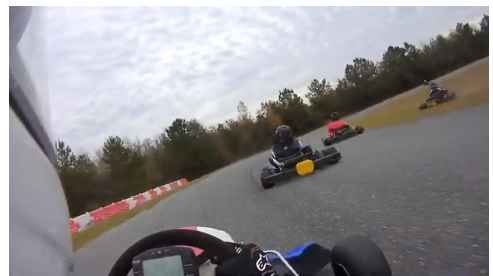 I’m not race experienced like the rest of you but I agree with James here. It looked like maybe you could have left more room to allow for any reaction.

Speaking as a member of the novice brigade. It can give you a heck of a fright if someone comes through. I try to stay aware of those around me and our local track is much tighter and more technical than this, but I’ve still had drivers come up on me so quickly that I didn’t know they were going to be there.

It looks like you were traveling/lapping quite a lot faster with the closing speeds on what looks like a fast section. The slow drivers probably had zero idea any of you were there considering they were having their own race amongst themselves. The cannonball on the inside would have made them jump.

That jig left he made was too late to do anything useful, the threat was already in the grass. What I think we are seeing is the delay of processing between stimuli and brain. It’s interesting how long the “turn and get away from crazy man” impulse took to get from his brain to his hands.

At the very last moment, right before the spinning blue kart goes out of picture, it is starting to spin back ON the track. That’s when it appears the blue lapped kart with the yellow number panel made the sudden move to the left. (TJ’s point about momentum usually pushing a crash to the outside of the track is true in this case).

Looking at it a few times, the Faster Blue kart was going to try to pass both the Camera kart and the Faster Red kart at the same time, using the White ‘K1’ kart as a pick to pass the Red kart. At the last moment the Red kart starts to pass the K1 kart, which surprises the faster Blue karter, who gets on the brakes too suddenly, which spins it into the grass. Seeing this, the K1 kart then backs off, which commits the Camera kart to the outside.

Pure luck how it happened. But it does show the greater risk of an accident when a group of faster karts attempt to split a slower one. That Blue kart with the yellow number plate had one kart lap it on the inside, had another kart on the inside spinning. No way for that driver to know if there were other faster drivers trying to pass at the same time, and on which side. At that moment, all of the focus was on the spinning kart.

Good catch Charles. I didn’t see that and it makes sense. I just sort of assumed he was slow to process the visual info (blue kart).

Looking at the rear view shot, I don’t know if the the spinning kart actually managed to spin back on the track, or if it stopped right on the edge. But its trajectory was definitely heading back on track (backwards). More than enough to make the lapped karter react.

This is what happens with mixed classes in the same race, or even vastly different speed drivers. Mirrors exist for a reason in mixed class racing…

First of all, thanks to each and every one of you for replying. Believe me, almost all of these scenarios went through my mind a few corners back when I realized we were all going to meet in that downhill sweeper. You can hear I had backed off the throttle some approaching the turn. My plan was to follow the red kart through on the inside. Then the blue slider came flying by. He cut off my path to the inside. I was too close to the white kart to jig over there. So, I went outside of him and the slower blue kart. I was afraid to get too close to the edge of the track because of the dust and rubber out there. I actually thought I had made it when CRACK! We came together. I was out. It bent my axle. I thought I was going over for a second there. Never have done that. Thanks again, everyone. I was just wondering if there was something that I didn’t see that I could have done differently. My takeaway is: if at all possible stay to the inside. if that isn’t possible, give wide berth to those on the inside. By the way, we are all in the same class, except the white kart. He is a 100cc we are running 125cc engines. The guy that tagged me is just always that slow.

In hindsight, turn 1 in any forza online race looks like some version of what you went through.

One alternative not discussed: crash into the leader just as he comes up on the lapped karts - that way he’ll blame the next kart he hits for the collison. That’s straight out of the Michael Andretti playbook and not to be used unless necessary.

IMHO, it was your own fault, you hit the other kart. IMHO, when passing another kart, it’s up to you not hit them. You can’t do it every time, sometimes you cut it too close (like in this case) but don’t blame the other driver. I don’t know how many years of experience you have, but when I was learning, (first 2 or 3 years) I did some crazy things too. You learn to judge the person you’re passing. You can’t automatically assume they know what they’re doing, they know where you’re at, or what you’re going to do.

You do understand that the kart that hit him got hit by the kart that cut through the grass on the inside, right? (Or at least swerved to avoid the kart coming back up the track). I wouldn’t put the fault on him for someone else going off track and possibly causing a collision on re-entry that he got caught up in.