How To: Driving a Kart under "High Grip" Conditions?

I have some friends down in Phoenix right now for the COTA race. A few of them have never driven on a track with a significant amount of rubber put down, usually the product of softer tires or simply more karts on track than they have experienced before.

I have some thoughts for them on how to drive a track (setting kart setup aside) differently when there is a lot of rubber present, but I admit I haven’t driven a super soft “modern” kart on a high-grip track in some time, so some of my tips may be wrong.

Would any karting gurus care to comment on some general advice to get the most out of any kart on a high-grip track?

Smoothness is more key than ever, because every input you give the kart is going to be amplified by the grip. When you saw the wheel and set the inside rear wheel down, it’ll be a bigger penalty because the binding will be worse on all that rubber. On a low-grip track, you can get away with sliding the kart a little. Not on a rubbered up track. Also, I’ve seen a lot of drivers get slower on a grippy track simply because they aren’t comfortable at the limit anymore, since the grip level and how much speed you can carry have risen so much. So make sure the driver is using all that rubber as much as they can and driving a bit harder than they would on a green track.

You have to be able to feel that inside wheel hiking hard and keep it unloaded, resist the urge to countersteer or set it down. The “under the rubber” technique I always preach about is also really important. If you’re slightly too wide on entry, the kart is going to come across the rubber and you’re going to go from little grip to a lot of grip. This is going to unbalance the kart, and usually drivers will complain that the steering wheel feels like it’s going to be ripped out of their hands.

Not really as important at Phoenix, but sometimes particular track surfaces (usually where tar sealer has been laid down to fix cracks in the asphalt) will build insane rubber. Sometimes it’s so bad the rubber actually gets slippery because it’s just rolling up when you drive on it. A bit like driving above the cushion on a dirt track.

Last thing is fitness. Make sure you’re drinking plenty of fluids and eating things that are going to give you real energy. High-grip driving is brutal on your body and muscles and will tire you out.

TJ, Would you say from my Newcastle videos that I was not driving hard enough or too hard? The first video I was driving like crap, but in the second video I got more consistent. I am good with low grip, but I struggle with high grip. Is that because I am over driving? I have another video on youtube that is from Rt66 Badger last year in the final on Sunday. What can I do differently?

TJ, can you expand what you mean by the “under the rubber” technique? Are you saying for high grip situations to turn in earlier, so that you would roll into the rubber but don’t cross it?

From watching your videos, it’s hard to say it just as simple as over or under-driving. There are instances of both. To me, that just means you need more experience and to get a little more comfortable with the limits of the kart, as well as adapting to varying grip levels in each corner.

@Aaron_Hachmeister_13 exactly. You are turning in earlier, but at a slower rate. This keeps the kart loaded more progressively instead of asking it to change directions abruptly, which in turn keeps the kart more stable in high-grip situations. You end up at the same apex point, but you get there with less drama.

T.J would an example of the early apex in high grip be in the I-70 corner? What is with the heavy brake then quick throttle? Is that a good/bad habit? Thoughts?

It’s not an early apex, Brandon is apexing at the normal point, he’s just turning in sooner so he’s under the rubber. I-70 builds a ton of grip, and if you’re not using that grip, the kart is going to wash out mid-corner and you’ll lose time all the way down the straight. Check out this clip:

Obviously you want to be as hard on the brakes as possible and as quick on the throttle as possible without getting the kart out of shape. You need to read how much grip the tires have as you’re feeling your way around the corner and adjust your input levels accordingly.

I mean when he locks the brakes up he flicks the gas. Almost like he is trying to make sure the read end doesn’t slip? Thoughts?

Oops, accidentally edited my post instead of making a new post and now I forgot what this one said…

What can drivers fix in their driving to combat the kart washing out in corners like I-70? Also is their anything you can do to the kart to help as well? Could you also explain rear end hopping?

I think we’re straying a bit off-topic now, but to keep the kart from washing out you keep the kart progressively loaded under the rubber, like I mentioned above.

I think we’ve covered hopping in a few topics, but if the kart is hopping in high-grip conditions, you have too much lift generally, so you’re either driving too hard and asking too much of the kart or the kart needs some handling adjustment. Widening the rear is a good quick fix.

Sorry for my sporadic contributions. I have this unfortunate ailment called life

Not sure if this is relevant on today’s tires. Tires make a huge difference by the way. In the old days we would set the front end really wide like 3 or 3.5 spacers. Soft axles and short hubs on the back. Raise it up to rake. Then throw on loads of seat struts. The funniest thing was seeing a mechanic bending and twisting 6 seat struts onto a seat.

The really high grip is like aero on a tunnel car. It’s counterintuitive but you can basically corner at any speed. You brake more on the inside like tj said. Then ride the rubber around. Depending on corner and engine type you want to trail brake a little so you are already in the reeds or trickling airflow. Because if you lose the torque in the rubber you are toast, maybe an icc has enough to power through but nothing else will. You will just get stuck in mush and bog down. Even in Super A they called it “keeping it on the slide” because of the massive 32 and 34 slide carbs.

I remember world champions and such were coaching me at the time and it was just like “flat out here and here you don’t lift”. It was hard to comprehend at first. Until you do it and your head gets ripped off your neck. I have a long neck and literally spent an hour a day doing neck exercises. People in the gym thought I was mad because who the hell exercises their neck?

It takes 2-3 years to get used to it. Then one day you will magically be able to drive the whole track without lifting and it will feel like you are surfing. Absolutely brutal. But a total New karting experience. It’s hard to forget these things because it’s just so awesome!

Sorry for my sporadic contributions. I have this unfortunate ailment called life

Ha, well I think it’s fair to say we’d all rather have sporadic, but good contributions than regular, daily drivel … cough…facebook…cough

Keeping a rotary FA spinning at the right RPM without “bogging” is what made it such a unique challenge. I do get a chuckle when folks say that more grip makes it “easier”, that’s not at all the case in my experience. You have to have utmost precision and accuracy in your inputs, a small mistake can have a compound effect because of how badly it upsets the chassis, tires, driver and knocks the motor into an RPM where it feels like someone unplugged the spark lead. 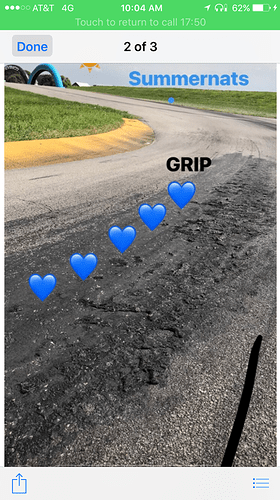 My ribs hurt just looking at that.

Last time I raced SummerNats there, the rubber was so thick in the Cell Tower Corner, you had to drive off of it or it would just roll up like you were driving on mud.

Yeah it’s crazy because that at point the tires actually have an adhesive effect. Lifing the kart up if it’s been sitting to long in the scale line SUCKS.

The scale line being referred to. Is this also referred to as the racing line?

The scale line is referring to the literal line to get your kart scaled at the end of the race. On a hot sticky day, the karts that just came off the track lay down a bunch of sticky rubber when they stop to get weighed after the race, and it makes pushing your kart onto the scales a pain in the butt.