Hi everyone,
I have recently started a YouTube Channel where I post general karting onboard videos. Obviously, the guys who are at the top end of the sport are gonna have lots of Views and Subscribers. However, I’ve seen people who only race at the club level who have a significant following. How do I get to this? I’ve seen the bigger karting channels, and also the many more that are really small. The differences tend to be in quality, but is there anything I should know to grow my channel? What should I do? How do I grow my channel? Thank you in advance!
Also, here’s a link to my channel if you want to check it out and see if I can improve it somehow. Also,
consider subscribing! Don’t worry, I won’t clutter your subscription feed at all. 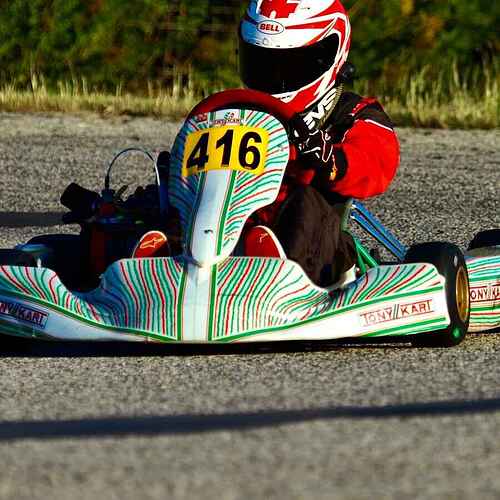 My name is Ellis Vance and I'm a 15 Year old Karting Driver from Houston, Texas. I drive the #616 Lo206 TonyKart in the Greater Houston Race Series🏎💨💨 New to my channel? Hit that subscribe button and like my videos to see quality racing content!

Thank you for any input or advice!

You need to whistle up Jorge at JaM Racing or the Stahl Brothers. They have great karting channels and could probably give you some insight and/or advise.

I prefer real time because it just gives me a better feeling for the race, I’m also 15 and racing lo206😁

Here’s some things I’ve learned… not specific to youtube however.

In no particular order:

I’m gonna echo storytelling. I find that all the folks who are successful with this tend to bring you along on some sort of journey. Less about driving, more about the experience.

I just post races and laps, I don’t tell a story, really (try to do that here instead). Even with just that, in time you get folks watching. You do have to get it out there by crossposting your content.

For me, youtube allows me to store my race history and document my progression. It also allows me to put together audio/visual stuff to describe little road trips and the like.

Thanks, I appreciate the help. When y’all talk about telling a story do y’all mean something like a vlog like the Stahl brothers make or a voiceover like Illegal Alien or Ryan Norberg?
Thank you for helping me.

@Kart_35
I agree I think the real time videos are better especially when someone fast uploads one😂
Surprisingly there is a lot of 15 year old kids just starting out in 206, I always thought I’d be the only one when I started, but there is actually a lot of young 206 drivers where I am. I guess that’s good because it adds to the competition.

Why not both? I wouldn’t restrict it to one format or the other. The medium\edit should support the story that you’re sharing.

You could even try commentating your races while driving…

Tell a story as mentioned. You can voice over or even recap based on what happened. Stahl’s are just some random family from Indiana but they have a story to tell. “Aw man I bent an axle” or “I felt good but got bumped here and it affected me” “found an issue with the kart fixed it fought back.” Etc

Put yourself in my shoes I’m a random 206er from Canada waiting for snow to melt. Why would I want to see You race in Texas? Tell the story about your challenges and tribulations and how you overcame adversity. Tell me something you tried that failed or about how you put a lot of practice in and it really improved on sections you struggled with. I treat Stahls like a show and binge watch the crap out of it.

I think stahls tell the best story. There’s a kid in Texas (maybe it’s you) just starting out and he was doing a decent job of talking about what he was going through even just starting out. Give me something I can get invested in. I’ll watch good content any day. Also sound is huge.

I know Oscar from Illegal Alien Racing in Real Life. He is actually a pretty laid back guy and puts in a significant amount of effort into making good content. Like the rest of us, he sometimes questions his decisions or what makes for good content. I think like most people the reason I like him is because he talks from the heart. Meaning he is not just trying to put on a show, but he actually immerses his audience in what he is going through. Be it League, club or just trying out new things, he is taking his audience along for the ride. Its a Human Story.

Much like the Stahl Brothers and how they talk not only about the race, but what is going on behind the scenes before and after the race. They often start with a build up, then move on to challenges and cap it all off with a race recap. It sucks you in. It fuels your curiosity. It makes you want more.

Oscar and the Stahls blend the two well (maybe the Stahls better) of what happens behind the scenes as much as what happens on the track. That’s what gets you hooked. They both have obviously invested the time and effort into putting out High Quality content and Sound is a big part of that. You don’t want to mute the sound of the Kart just so the audience can hear you talk. Instead, you want the engine revving up and down in the background while you overlay some narration about what’s going on.

I would suggest working on that front. Keep it about the Story and blend in the Action. Drop some clips of what happened on track that made you feel a certain way or struggle to recover from a particular incident. Those are the things people will relate to more than just seeing you turn laps.

Lastly, if there are other Content Producers in your area (similar or different), don’t be afraid to invite them out and include them in your Content (i.e. Cross-Content). You may find a new friend, Supporter or just open up your Audience to those who would not have found it in the first place. Maybe a local MX guy, Skate Boarder or even a Plumber that has a channel may find something of interest and be willing to promote you on there channel as you promote them on yours. Share the Love and it will come back to you.

Thank you for your time and effort everyone. Y’all gave me great advice that I really appreciate. I appreciate the new insights y’all gave me, I see it in a whole new way now. Thank y’all so much.