How to set Fanatec DD Pro setting and KartKraft more realistic as a real kart?

I have a Fanatec DD Pro and play KartKraft these days, but I can’t find a good setting with both DD Pro hardware and KK software to make it more realistic. Especially in KK, it always vibrates strongly even on flat tarmac. If I reduce the FFB to make it normal, the force of the steering wheel is too low also. I can not find a good balance between them. Can anyone share his settings?

I also play Kart Racing Pro. Its force feedback seems normal to me, but the graphics is not so good. But most people here says KK is better than KRP. So I don’t know where I go wrong.

I have not really played in a while. I was noticing that my ffb through the shakers was acting oddly as well. I’ll hop on soon and see if something is up.

Any thoughts on rfactor 2 with kartsim DLC. With Motorsport Games acquisition, I am not sure KK has a bright future TBH.

I tried to find a realistic “sim”, not a game these days. I tried almost each titles with karts. I don’t have time to tweak them in details and tested each of them for hours. By the way,I use fantec DD Pro, which may affect the result. Here is my opinion:
Physics:
KRP>rfactor 2>=AMS2>AC>KK
Graphics:
KK>AC=AMS2>rfactor 2>KRP

Regarding rfactor2 and AMS2, it may be better if I can spend more time to tweak it.

They supposedly are doing a Kartkraft 2 with a 2024 release. But, I’ll believe it when I see it. The game is nowhere near complete.

I think we come up with the same problem and it is amplified because of the DD Pro wheel. It is very strong on DD Pro wheel.

In my case the shakers seem to have lost road feel (tires). It could just be me and my settings but it felt off.
Iracing also felt unusually numb.

Have you tried to turn up the Minimum Force in KK? I find this is very helpful in iRacing, not sure about KK.

I will try that. I also want to try using only the built in shaker stuff in iracing as opposed to simhub.

Got my rig working again. Things feel pretty good to me now. With my DD I run it at 75% ffb in Kartkraft. On the base, I have ffb at 75%. I have 15 inertial damper. Everything else that filters stuff I leave at zero.

So basically I just run it raw. It seems good to me without anything filtering/smoothing. The 4 interpolation is there because it was there originally or something. No idea what it does but I will play with it to see. 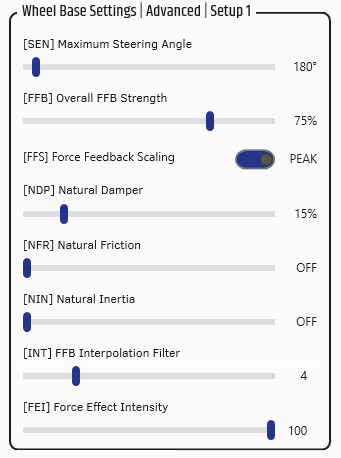