"I went faster. Was it the chassis adjustment or my driving?"

TJ, a little off topic, but I wonder your advice on this.

I see this claim a lot. “I changed XYZ and picked up 0.X seconds”. Usually some minor change that picks up some outrageous amount of time. I think many times “newer” (this is relative) folks are not consistent enough to see these types of changes.

What would your advice to those folks be? Use average of top 3 lap times? Focus on “feel” of the kart?

Yes, definitely an issue with newer drivers or drivers who aren’t attuned to the limits of the kart yet or aren’t consistent yet.

Data can be very helpful with this because you can look at split times or even just the GPS trace and see if you did something wonky in one corner that had a big effect on lap time, as @oldguy was able to do in his thread. Or you can just feel you made a mistake as a driver, and that explains the lap time difference. Sometimes I’ll come in and whoever I’m with might say “looks like that didn’t work”, but as a driver I remember that maybe there was a mistake on my best lap or something, and up until that point the change felt better, so I keep it, even though the lap time doesn’t look better.

As with all adjustments and driving things, they work in tandem. So I wouldn’t say necessarily to focus just on the feel of the kart with each adjustment. That’s part of it, but the stopwatch is part of it too. Taking a broad view on your overall lap times for each session and judging adjustments on how they performed over a whole run is a good idea, if you feel you aren’t being consistent enough to make a call on how the adjustment worked.

And this isn’t just an issue with newer drivers either necessarily. I know there are times where I make a small tweak and I am not sure how I feel about it after a session, or maybe my lap times didn’t change much. Maybe I didn’t feel I put a good representative lap together, or I made a mistake on my best lap or something, and I want another session to really judge the adjustment with a little cleaner run.

. Hopefully this spurs some discussion. I appreciate your response and feedback.

What would your advice to those folks be?

Not so much ‘good’ but consistent. I remember the days (because they weren’t so long ago) my times were yo-yo ing. Once I found consistency I was better able to sense changes in set up and the effect good or bad

If there is anything I have learned over the last few years of karting its that:

The biggest variable is me!

When I raced RC cars the general mind set was the equipment is what made you faster and I see that in karts too. However, the harsh reality is the driver is what makes the biggest difference. To some extent you can remove the word “equipment” and change it with “set-up” as that is the same situation. As long as your set up is in the ball park I don’t think any one change or series of changes is going to make drastic difference in lap times, maybe small amounts at most.

Case in point, my most recent outing my kart started good and by the 4th lap was loose. I was also in second and being hounded. Lap times were going up. After almost losing my place I forced myself to alter my driving. The ill handling improved, lap times improved and I almost caught 1st.

One thing I’m terrible for if something is off for example tyre pressures, the kart handles poorly I start over driving it which just serves to exacerbate the problem. Number of times coach has sent me ‘calm down’ hand signals from pit wall

Not so much ‘good’ but consistent.

Consistent is part of being good. The other part is being fast. Every time I seethe setup of someone not fast enough, in karting or other, it is always to help them compensate their mistake and not to make the chassis fast.

For me, I’ve found consistency measured by the stop watch doesn’t necessarily indicate that one is driving consistent in the strictest sense, especially if it is only for 2 or 3 laps. Yes, I get the same lap time but the speed traces are very different. Would a better definition of consistent driving be when the speed traces from the data look very similar?

For me, I don’t use a camera, instead I use the MyChron Time Difference read out, which helps to provide a real time sense of whether the turn was done better or worse while on the track. Are cameras useful for improving driving?

Would a better definition of consistent driving be when the speed traces from the data look very similar?

Very true regarding consistency on the watch.

This is where split times can be helpful. If you look at the split times in the data and your theoretical best lap, you can see where you lost time in each part of the lap. Lots of drivers will have good lap-to-lap consistency, but aren’t quick and that’s mostly down to them making a different two-tenth mistake each lap. So they never have a lap that’s “fully put together”.

Cameras are as important as good data review in my opinion. Nothing can substitute me actually being able to see your hands and feet and what they’re doing in each corner. When I do video review, we do a lot of pausing to see steering input, then going slow-motion through the corner and seeing how that steering input affected the kart throughout the whole corner. If you slow things down and stop at various points, you can really see how a big load of wheel input can upset the kart, and what that actually looks like.

Sometimes what I find is a different set up may not be quicker, but you may be able to drive it better.

Yeah, and sometimes that’s the issue

It depends on the track but I shoot for within 0.1-0.2 of my theoretical each lap. On a longer track with more splits it could be a little more.

That’s what the top drivers are doing.

What’s the best mounting position for a camara for someone to review?
The radiator mounted views, you can hardly see the throttle. What do you rely on then? The engine sound?

Best mounting is helmet, but that’s not always allowed and some people don’t like to put sticky pads on their helmet (like me). Radiator/seat strut is the next best thing. Not a big deal if I can’t see the throttle, I can listen for it. Mounting on the front fairing, far enough up that we can angle it to see both pedals can be helpful too.

I invested in a Cambox, if you want to see what it looks like 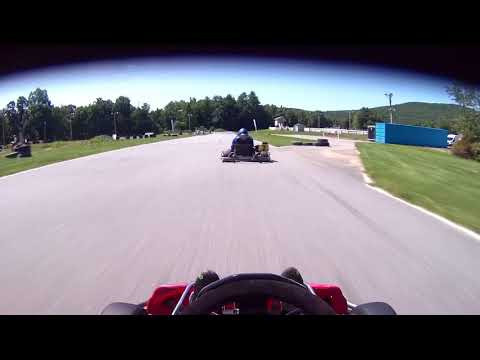 I pretty much try to find what improves me on practice days but have found actual racing days to be the best time to figure out if I have actually found pace compared to my competition.