After a couple of months of running KA100…

Look at results on racemonitor and you can see times for Rogero, Ramsey, and Hotz.

Got to put about 60 laps on the engine yesterday in beautiful 75 degree weather at Concept Haulers MotorSpeedway.

First impressions: it’s really fun to drive! The engine’s power feels a lot like driving a Komet, but it doesn’t have the bogging issues on the bottom end like the Komet did. This thing has plenty of low-end torque, and it pulls nicely off the slow corners. I noticed a little lag on throttle response at the mid-range, when lifting in fast corners, but that could be down to carb settings, as we were running pretty rich most of the day. We ran it up to 15.8k for RPM with no signs of any issues. The starter worked flawlessly all day, firing up almost immediately every time. The engine sounds pretty gnarly. It has that echo that aircooled engines seem to produce, and it growls really nicely on the low end. Vibration was mildly more than an X30, but not as bad as a Leopard. My only complaint of the package was the engine itself is pretty large, so my elbow initially was hitting the head on cornering. But I just adjusted my posture slightly after the first session and was fine after that.

Lap times are hard to compare since the track was green, but we were about 1 sec down compared to X30 Jr., but some of that is down to tires. I had MG Reds, X30 had Yellows on.

One thing I noticed is that the engine is fairly easy to drive, meaning you can find it’s limit pretty quickly. This will probably lead to some really close racing, and it’s going to take a really really good driver to eek out the very last couple hundreds on every lap.

I’m really excited to race this thing. Like I said, it’s a blast to drive, and should provide some really close racing.

The engine was fantastic.

Zero running issues (except for a carb issue on Saturday morning which was completely our fault), great drivability, good speed, and the closest racing I’ve seen in a long time.

It’s fast enough and the powerband is right that it feels like driving a proper kart, but there is still the tactical nature of drafting and pushing you see in Yamaha. Almost every race had a lead pack of 5-10 karts, all lined up. The engines were incredibly close, and the lap times reflected that. Here are the top lap times from heat 2 on Saturday: 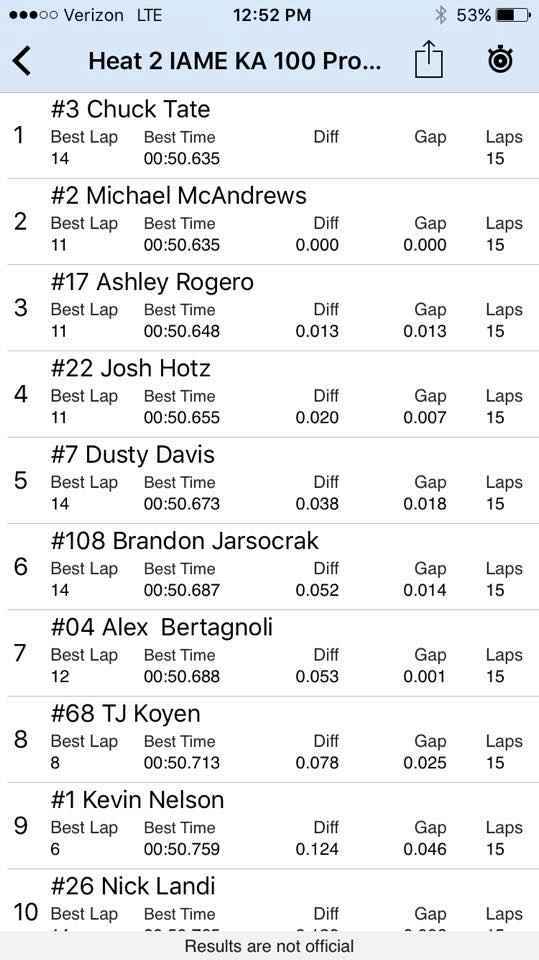 The field was stacked with competition and I would say 10 drivers had a legitimate shot at winning each day.

The formula as a whole as great too, with the MG Red tire providing the perfect amount of grip for the engine. And they held up incredibly well also. USPKS requires you to run the same set of tires Saturday and Sunday, and by Sunday afternoon they still had plenty of meat left on them.

The drop-down bumpers were also a success. I’m officially a fan on those as well. There were some teething issues early in the race weekend, with some drivers testing the limits of the bumpers, but by Sunday the racing was much cleaner. I don’t think there were any wrecks on the starts of any class all weekend, and the only kart pick-up required post-race was for mechanical failures for the most part. There are some negatives to it as well, as some people are experiencing some issues with certain clamps coming off with minimal contact, or drivers getting stacked up in wrecks and dropping the bumper through no fault of their own. While trying to sort out our carb issues Saturday, I loaded up really badly on the start of the first heat, and accordian-ed the field behind me, dropping a few bumpers along the way. I felt really bad about that… But I think as the policing gets better (camera usage etc) the frequency of accidental bumper drops will go down, and I think once racers figure out the limits of the bumper a bit more, we will see even cleaner driving. In my experience, there is still some give to the bumper, you can bump and grind a little bit within reason, but any malicious attempt to punt someone off the track or off line will drop it down for the most part.

I had a great time this weekend and really enjoyed the class as a whole! And with 27 karts, it was a super competitive field.

Nice report on two topics. KA100 and Drop down bumpers.

Can you spill the beans on the carb issue, maybe we can prevent others having same issue?

Unlike the X30, the two needles are different pitches. We accidentally switched them when we rebuilt it Friday night, so our carb settings were way richer on the high speed, and way leaner on the low speed than we thought they were.

You seemed to have pick up some pace in the Saturday sessions. Was that from fixing the carb or did you figure something else out?

Had the pleasure of racing the KA100 at the USPKS Round 1 at GoPro Motorplex. As TJ can testify, I was a rolling chicane, but that was due to chassis issues, not the motor. I found the motor very easy to tune, reliable except for the starter button (partially my fault as I pushed a spade up into the switch and it inverted operations…) and the kart started and ran via external starter for the rest of the weekend. I wasn’t down on power – I held even on the straights. I bet TJ can verify RPM range better, but I was seeing just a touch over 14000, reliably. For a newer karter, it’s a very unintimidating package and I see it taking over club TaG as people don’t want to take a beating from the current TaGs, and the air cooled simplicity and lower weight and hassle will be valued. Just my take. We’ll see what round 2 brings, but I’ll report back if I have any reliability issues.

Solely from fixing the carb. The kart balance was pretty good from the opening session on Friday, just the carb issues that slowed us down. We gained a little time from small chassis adjustments which then in turn allowed us to drop some teeth too, which was also a big factor.

@Ted_Hamilton we were in the upper 14k range, with over 15k in the draft, on an 11/75. If we had made the right chassis adjustment for the final, we could’ve dropped another tooth I’m sure. I think we dropped 3 teeth over the course of Saturday and Sunday, just from the kart rotating slightly better.

As I got the chassis closer to right, my RPM gained too. I’m sure I would’ve been right there too. I was running 10:72. I got this Praga used with only a few weeks prep time made the mistake of mounting the seat in a “standard” position – I finally raised the seat 1 cm for Sunday and instantly gained a second and some handling. I think I’ll gain another second by raising a bit more for some weight transfer, and another second from some driving refinement that good handling will allow. That should put me in the pack for PIRC, I’m hoping. I’ll PM you sometime this week with a couple of chassis questions and to talk helmets. Cheers,
~Ted

This weekend was my first time racing since July of last year. And then before then the previous race I did was in June in 2015. So I’m far from an expert behind the wheel in both experience and results. However, I’ve driven clones, LO206s, Rotaxes, Yamahas, X30s, and now KA100s. I haven’t raced them all, as most of this has come from my time at Atlanta Motorsports Park as both a driving instructor and employee.

I really enjoy racing and driving X30, and would have done it if it weren’t for the free motor deal given by USPKS. Even then, it was tempting, but not knowing the turnout situation I opted for KA as between USPKS and WKA having the assurance of at least 20 karts on the grid at every round is a rarity.

With Comet as the only engine builder present, I along with many other drivers were shooting a little blind when it came to gearing for the Power Curve. Like a Mini Swift, the engine has no rev limiter but simply stops producing power after a certain point. I started the weekend on a 10/70, raced Saturday and qualified on Sunday on a 10/69, and raced on Sunday on a 10/68. I was trying to keep around the high 14s in draft.

The motor package was fast enough that it felt closer to TaG than Yamaha, but both from a viewing standpoint and as a driver the closest comparison I heard was when speaking with Alex Bertagnoli that it felt almost identical to racing TaG Cadet, which is the IAME Mini Swift or Vortex Mini Rok engines. That seemed pretty accurate, although because the motors were so crazy equal, the racing looked more like X30 at SuperNats. The top 7-9 were all hitting the same lap times and everyone knew how to draft, so the only way you caught anyone is if they passed. You could run a single kart down when working together, but it was not nearly as easy as Yamaha or Cadet.

I commented to a few people that the racing was “frustratingly close” in the sense that it was REALLY hard to catch up without a drafting partner and everyone was super equal. This, combined with the many local experts, resulted in super tight pack racing where no one put a wheel wrong and we all just clicked off times and had to muscle forward a bit. No complaints from me, I thought it was awesome.

Josh Hotz and I chatted how the braking zones were almost identical to X30 on MG Yellows, meaning that although we were down on power compared to them, our harder tires extended those braking zones and allowed for some legitimate aggressive late-braking overtakes you would expect to see in X30.

Why did you end up taking the carb apart?
I’m very eager to see the long term costs on this thing.

I think I’ll split this topic later today into the talk leading up to its introduction, to driver’s experiences with it. (Done!)

We usually rebuild the carb after Friday practice just to be safe. In this case, it had the opposite result…

Also wanted to check pop-off and just give the carb a general look over.

It specifies the use of the fiberglass reeds and the KA100 comes with carbon fiber reeds. This was pointed out in tech yesterday at GoPro as most people were just running the reeds that it came with.

So what was done about that? We’re there mass disqualifications? If not, what will be accepted as reed material at the next event?

@tjkoyen wrote a comprehensive review of driving the KA100 on EKN.

I am somewhat curious about how the KA100 might grow across the US, if it does. Especially because I’m in that weird limbo of looking for a TAG engine with a decent regional program size. (The Northwest area doesn’t have really a solid footing on what to do if you want to drive TAG.) 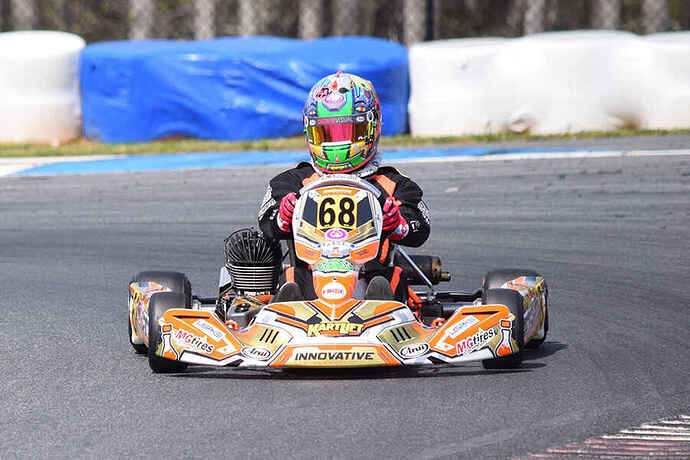