I bought a complete 2011 crg besides the frame because it was cracked and throw away, I forgot the model it was off hand. Now i acquired a very clean 2011 black star frame and began the assembly and have run into an issue with installing the sniper adjusters. I didnt realize the black star used a different setup but have seen pictures of the snipers on 2011 black stars so im a bit confused.

There isnt much info out there at all about installing snipers onto older crg chassis but hear the mounting screws need to be 100% parallel with the frame otherwise it can never be set up correctly? I can drill and tap no issue but to have it 100% in line does have me a bit worried. Is this true as i assume it was affect proper caster setup? Nobody said exactly why it needs to be in line perfectly.

Secondly my lower spindle pill doesnt have any holes in them? From what i see in all the sniper kits is that this piece should have a hole in it to secure to the frame. I mean they look neutral and do i need to get other ones with the hole to secure it?

Id very much appreciate any insight on my issues. - Nick 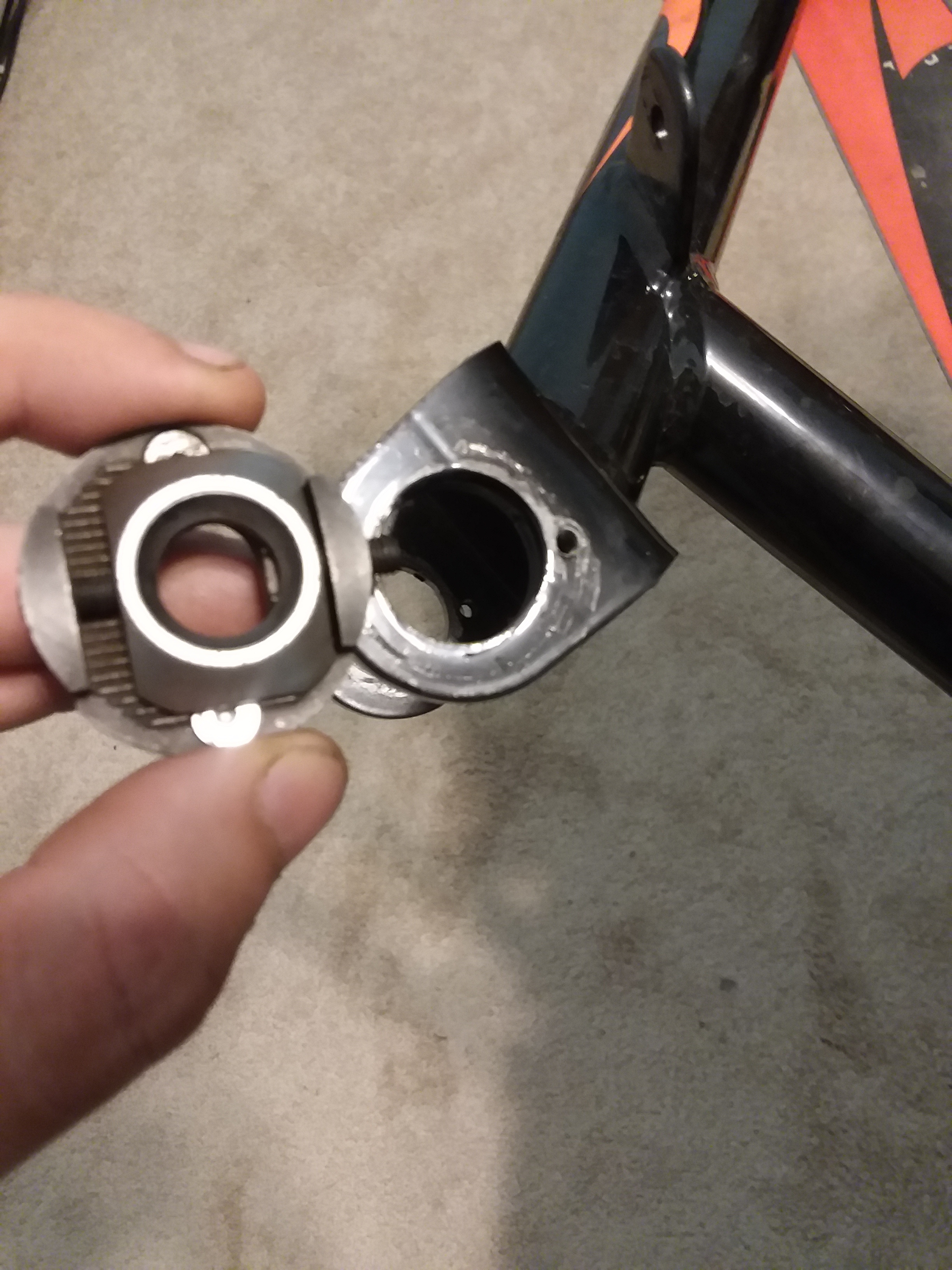 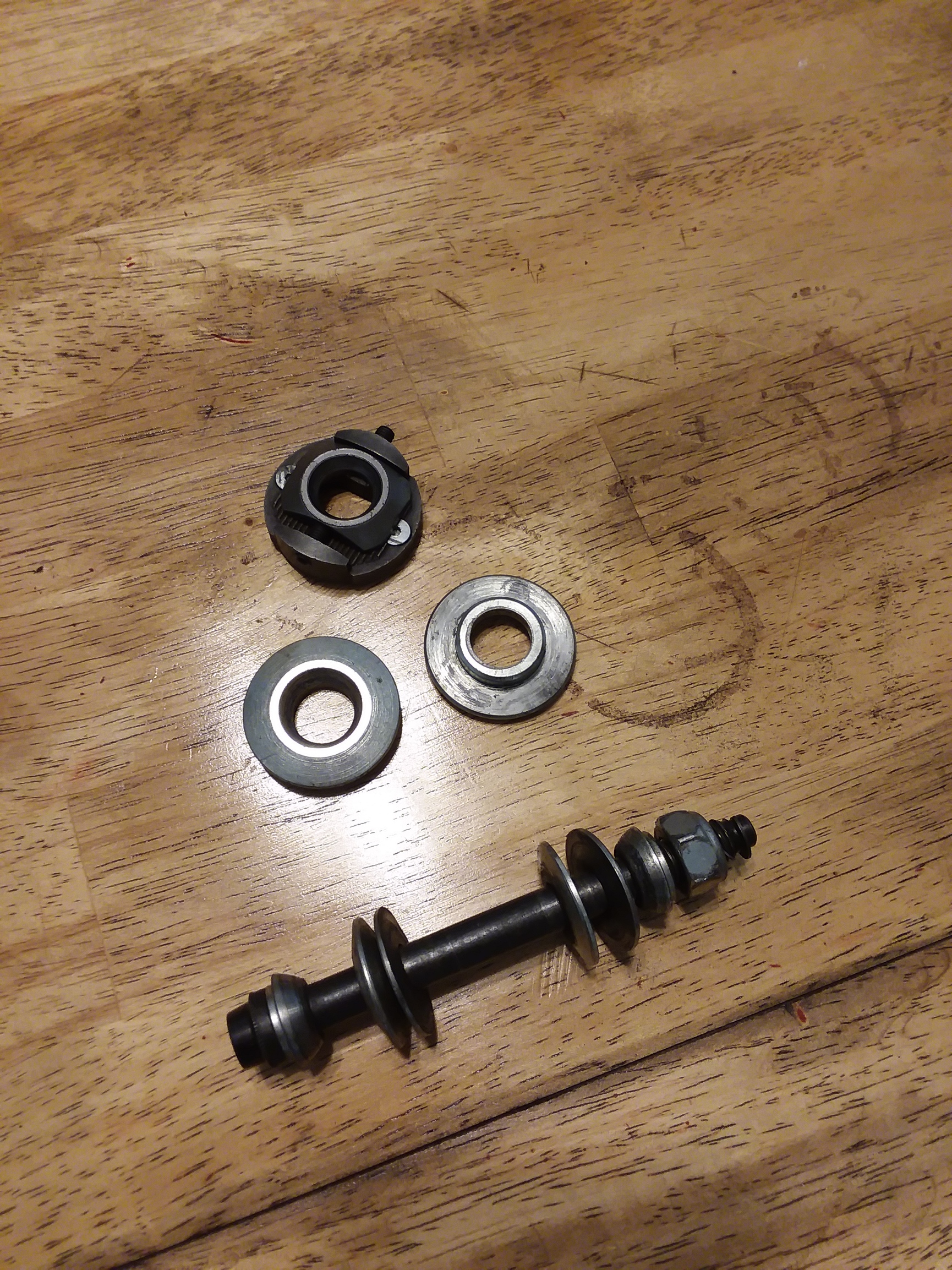 Never had the luxury of such things but if the units are fitted so that the ’ caster adjustment ’ serrations’ are not 100% at right angles to the kart centre line, you will get a very slight camber change as you adjust the caster.
However from your pic it would seem to be fairly easy to fit the two serrated pieces in place, align them using a straight edge across the chassis, clamp them in place and then drill and tap the locating screw threads.?
If you are using neutral bottom pills there wouldn’t seem to be any need for a locating hole or screw.
There are warnings about re overtightening the kingpin bolt causing failure of the serrated plate.

I think John Leah is correct. It seems they would have to be parallel.
The main issue would be is the kart frame good & not bent.
You can also put them back on the old kart and see how they lined up for a reference.
I assume you don’t have a Sniper Laser alignment tool: http://sniperamericas.com/v2.html

I see, i honestly didnt think about a straight edge (was a long nigh before posting) Should be easy enough to get it position correctly then.
As your putting them back on the old kart i dont have the old kart since the previous owner threw the frame away. I do own a laser alignment kit but not the quality ones that Sniper are, i think i will save the money and buy those this winter.

A couple of points.
Although having the Sniper units misaligned will give the effect as above, the change in camber will be very small. I wouldn’t think that 100% accuracy in this respect is necessary to ‘set the kart up properly’ maybe 90-95%.

Looking again at your picture , the Sniper unit looks large in diameter compared with the top of the ‘C’ bracket. Is there enough ’ meat ’ to take the 4 mm?. screws particularly the rear ones?
Clearly this frame wasn’t built for Sniper units or the holes would already be there. Just a bit concerned.

Clearly this frame wasn’t built for Sniper units or the holes would already be there. Just a bit concerned.

This is my concern too. It looks like this chassis might have come with an 8mm kingpin setup.

The main holes are already the required 22mm. The hole that is already there aligns with the snipers, i just need to turn the snipers and judging by the marks on frame i should have enough meat. Those circle marks are larger than the holes required.
I seen people drill these to 22mm and add the mounting holes but there is no detail about it so im not too concerned with the strength of the frame. 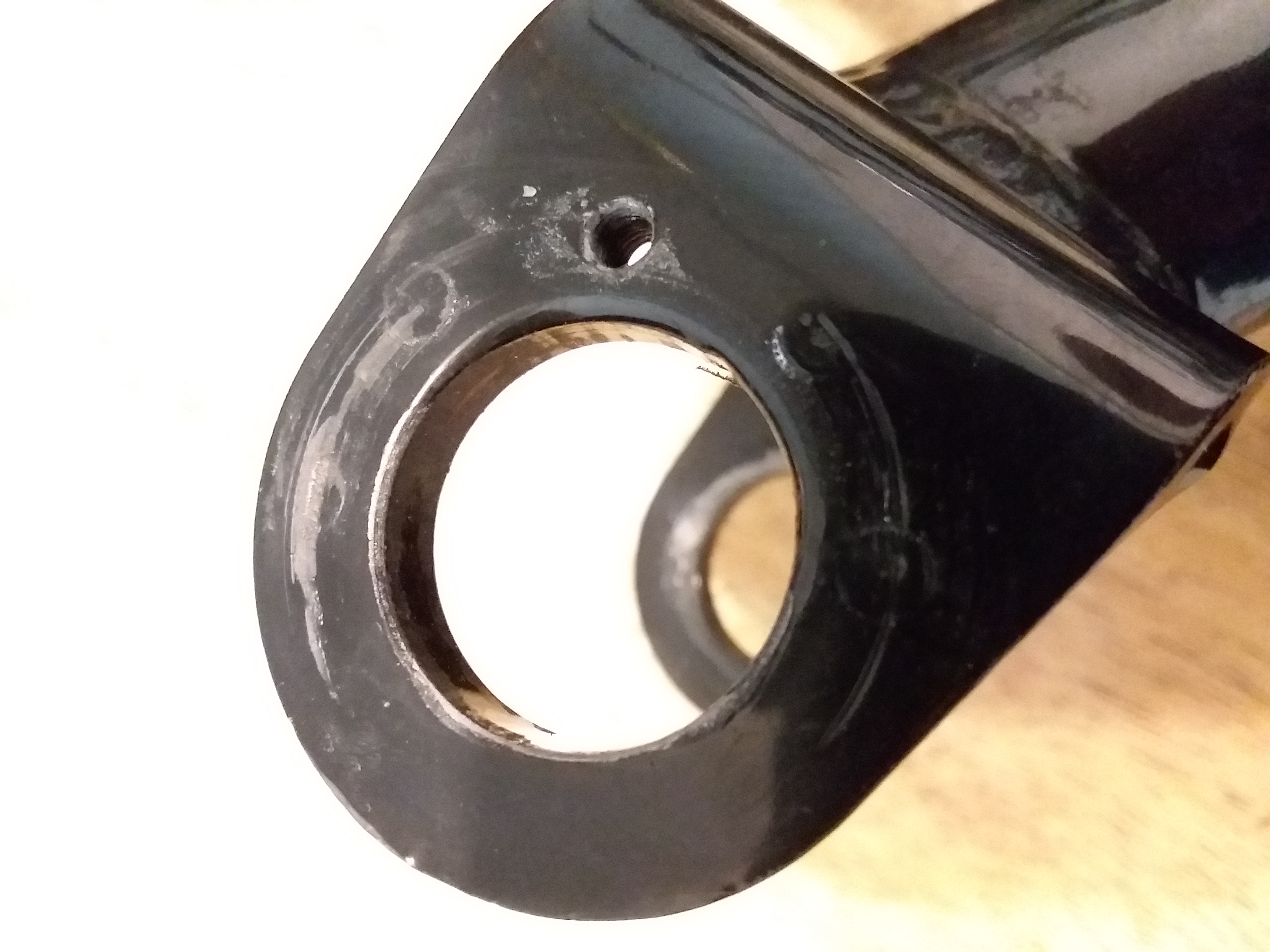 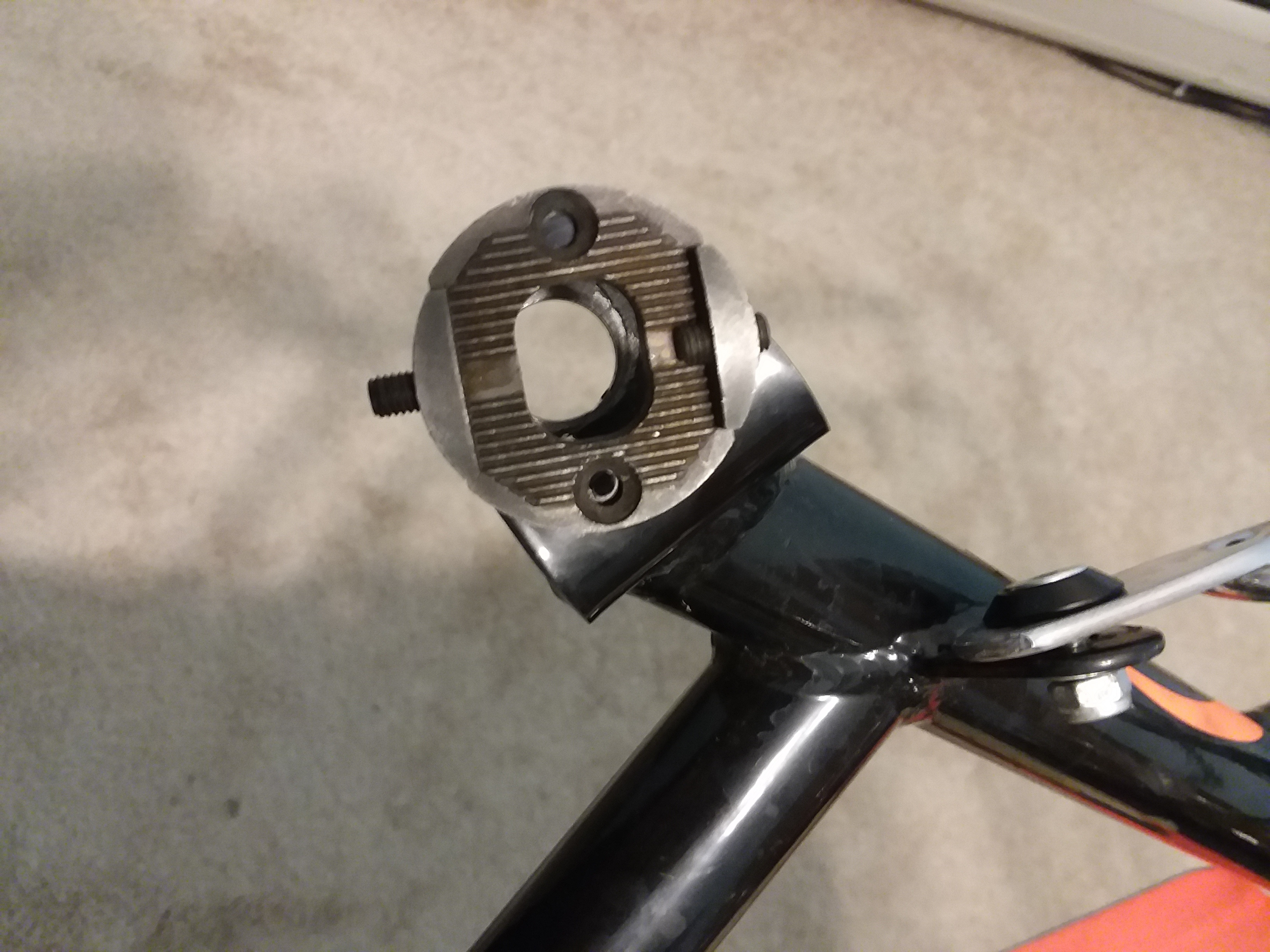 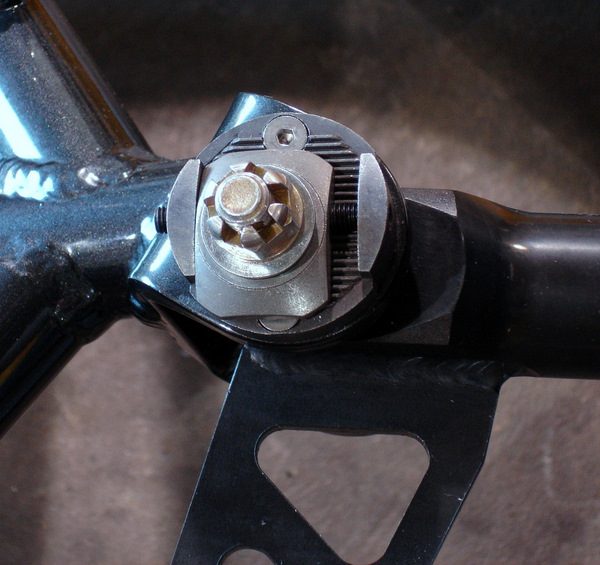 Yes my orientation in the picture is completely wrong. I was showing that the original hole there (made for the original camber design) is a reference of how much meat there is to drill and tap the holes needed to properly install the snipers. Judging by your picture the “C” doesnt look much thicker that mine which adds to my confidence of drilling the 2 holes. Thank you!

First and foremost, the people you should talk to first should be Sniper themselves, and I would also recommend Margay, as they are the biggest user of the Sniper system across their entire chassis line.

The Sniper system is a very interesting and unique idea, although it has now been copied by Righetti Ridolfi and a couple chassis brands.

I have never physically measured the orientation of the axis of the caster/camber pill on most karts relative to the central longitudinal axis (think an imaginary line perfectly perpendicular to the rear bumper, and perfectly parallel to the karts direction of travel)…however, I would imagine most chassis manufacturers either have their eccentrics/pills parallel to this line (at full or zero caster), or offset at a specific angle. Each manufacturer may have different reasons for this, and until you measure, you just won’t know.

However, it stands to reason that if you were to replace the standard pills/eccentrics with the Sniper ones, you would want to get as close to this orientation as possible.

Due to the way the Sniper pills are fastened, I highly doubt the existing holes will interfere with mounting them. I would strongly suggest you sand the edges of the yolks, and also perhaps around the previously drilled hole, to make sure there aren’t any ridges or burrs in the paint. Due to the way the Sniper pills are designed, they are very susceptible to fracture around their mounting bolts, and I suspect any underlying ridges on the frame itself would only make this worse. I can draw a picture if this doesn’t make sense.

The biggest thing to be really, really careful of with these is to never over tighten the adjuster screws. While a great design and concept, the Sniper caster/camber system often fails due to ‘flexing’ outward too far as one tightens down these adjuster set screws. Most everyone I know that has had them on their kart has learned this lesson by breaking 1 or 2 before figuring out how to handle them properly.

All that said, I really love the design, as it gives a lot more minute adjustment if you’re really into chasing every nth adjustment.

Is there a known torque value for the king pin nut with these? I think the problem of over torquing is due to the main parts being pressed sintered metal instead of being milled from bar stock. It’s a mfg cost saving strategy that sacrifices some strength, & there’s also no way to mill the adjustment grooves right up to the camber adjustment limit walls stops without impacting the tool edge, so casting makes sense for the chosen design geometry.

I’ve considered CAD designing a modified form of these that would allow milling operations, but that’s a whole other discussion space…

I appreciate the insight. I have heard about over tightening the kingpin bolt resulting is fractures but i didnt hear about over tightening the adjuster screws. Been told to just snug the kingpin nut down and keep new nylon nuts on hand. Im considering using blue locktite on the adjusters and just snugging them down and a tad more should do the trick if that muc. I will sand and smooth all the edges.

@Mojoracing29 how did installing the sniper kit go? I’m considering adding a set to my Wildkart.

In the end i bought the 8 hole D10 caster pills that were originally used on this specific chassis. What bothers me is 9 times out of 10 i see the blackstar chassis has the snipers on them.
Ive actually been having a very hard time trying to get positive camber with the setup i have now.

Im considering just slamming these sniper pills on and sending it for a weekend. My rear cross bar was cut and i welding it up so i dont care about this frame anymore. Looking to buy a NEW frame this winter.

I havent raced or practiced much this season but thankfully my times have progressed each time, I feel being stuck at neutral camber is holding me back now. Im now only 3-6 tenths slower than the front runners and 2mph slower down the straights. I honestly lack consistency the most though.