Hi everyone, I had my engine off and noticed that it looks like my chain is hitting my seat strut sometimes. The engine is offset as far as the mount allows and the sprocket is already pretty close to the third bearing carrier on the back. I have been trying to track down a grinding sound for a while now, I think this might be it. I noticed the marks toward the top earlier this year and have checked using tape multiple times, this is not rubbing. It seems the bottom does occasionally. I’m not sure how to prevent this… should I increase chain tension so there is less slack for the chain to move up and down?

From video it seems there is no rhyme or reason to when it grinds, in some corners (but not only one direction) and at the end of straights…

Can anyone recommend any changes to prevent this? Maybe I missing something obvious? 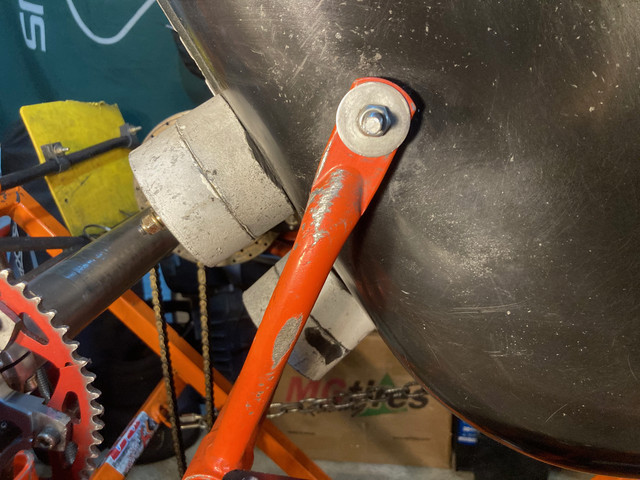 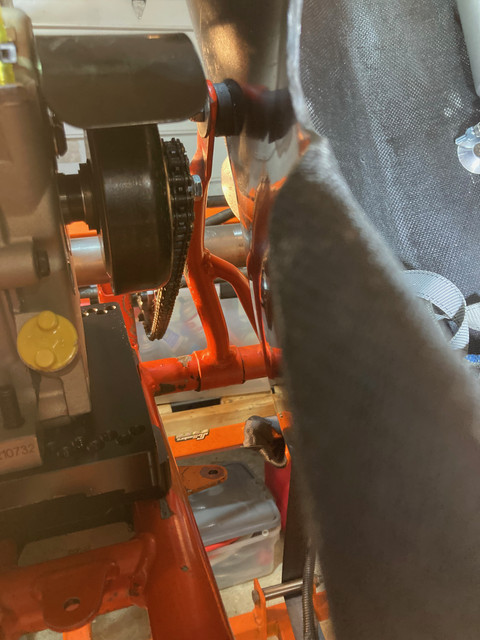 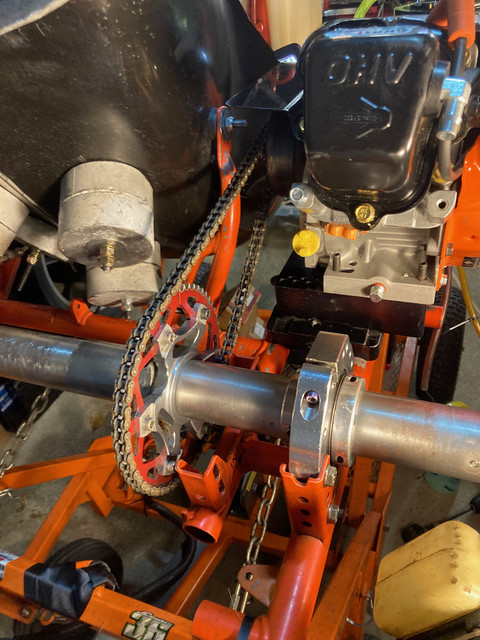 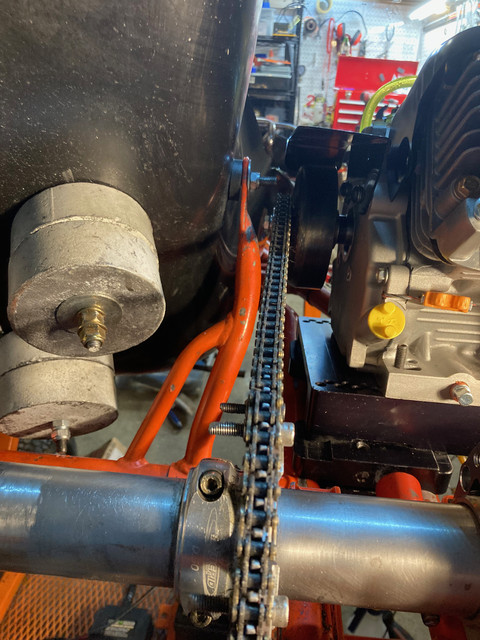 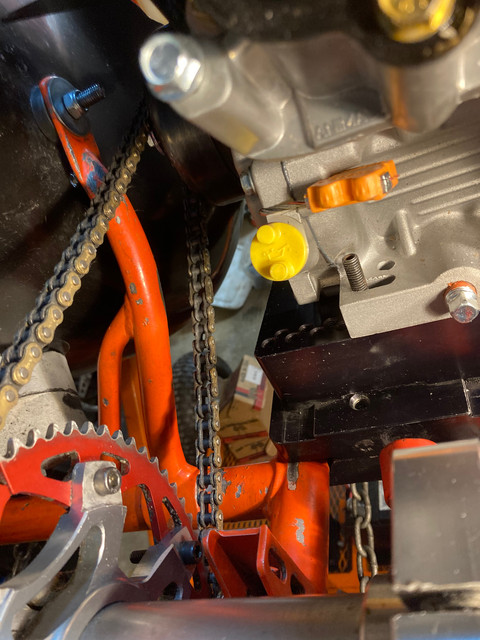 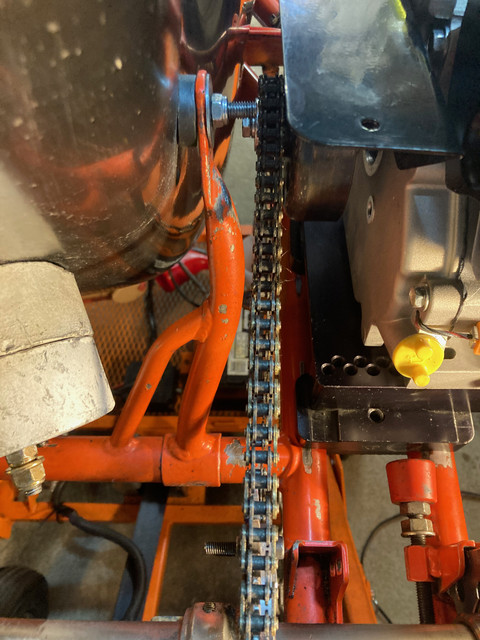 Can the top plate of the motor mount slide over any more? It looks like the engine mount bolts are as far as they’ll go but does the top plate slide? If so that’ll help.

if he’s in the furthest holes on the top late studs, he is maxed out on that Odenthal position.

Only thing he can do here is live with it oo move the engine forward and lengthen the chain to get it to pass lower on the seat strut.

@Yousef_Khalil what is the gap between the chain and the story strut?

Are the rear gear and the clutch sprocket in the same plane? In picture #4 the rear gear seems to point inwards but that could be an optical illusion.

They are probably off, the engine mount is loose and I need to align everything again after re-installing the engine.

The engine mount is maxed out to the right.

@CrocIndy Is there any downside to doing that? Should I add a few links? I guess I could also move it backwards…

Just saw this too, maybe that is my best bet for the final two rounds:

Sometimes this will happen depending on how the crossbar behind the seat is positioned. One of the differences with “four stroke chassis” is the position of that bar. It’s not something to worry about other than being cosmetic, assuming you don’t run it for so long you saw through the rail

Some remedies: Move the clutch drive outboard (assuming it might be inboard already) Wrap something around the rail where the chain is hitting. A piece of heater hose, cut, placed over and zip tied i…

Shouldn’t be any downfall to moving the engine forward and adding a couple links. I would recommend running a plastic sprocket guard on the sprocket carrier as well, even if you don’t move it forward.

You have a thick seat washer/ spacer on the right side. How about bending the sest strut yo the left. Its hard to tell in the picture but it looks like it may help.

Do you run extra seat struts that we aren’t seeing? I wonder/guess the seat struts may be moving/flexing some and is causing the rub. I would also want to be sure the axle isn’t moving. It likely isn’t as you would have other issues, but something to check.

Yah I think ultimate that is the solution. 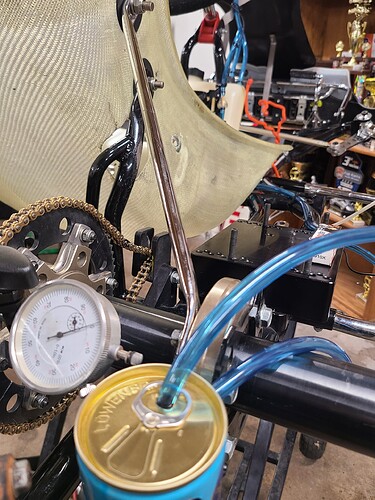 You could simply leave it alone, when I ran a Hillard flame this rubbing was done to seat post on my F4k. It clearanced quickly and never noticed any after second event.

You can also move the spacer on the Hillard to the outside. The clutch body has proper taper for shaft built into it. However, this just puts more heat into a clutch that already likes to overheat. 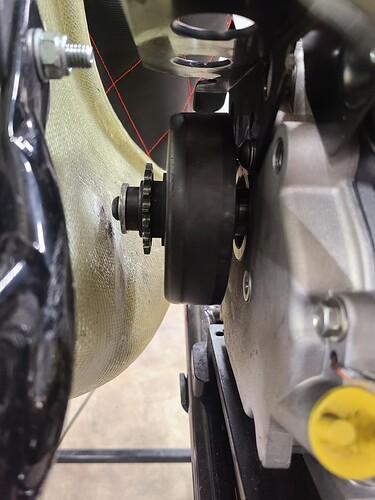 Personally, I wouldnt worry about rub and since your running clutch with sprocket outboard, I would run a Noram Stinger. Note Stingrr clutch drums are way more hit or miss on roundness. Also gives you a touch more clearance to seat post.