I am looking for a little input on year of this kart. Looking at the tag I see 03-08, is this correct or does Italkart have a different way of telling the year based on the homologation plate? 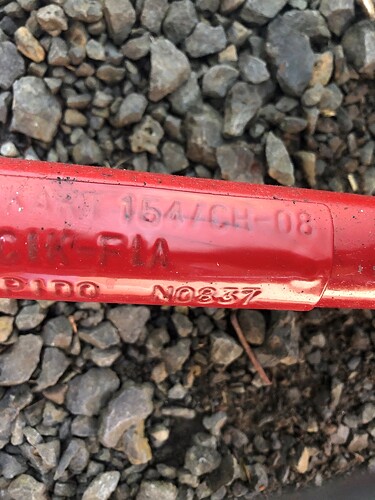 Scott, that’s correct. It’s a 2008 homologation, which ran until 2011 by default and may have been extended. Italkart at the time was made by SKM along with Intrepid; then there were all sorts of business maneuvers and ItalKart ended up owned by IPK.

Some sources for parts: Italian Motors in Washington or British Columbia, Prospeed Kartsports in New Hampshire, Champion Racing in Oklahoma.

Thanks Charles, I was told it is a 2018 kart and was just curious as to if that could make sense looking at that plate.

It’s possible it’s a 2018, it fairly unlikely, even with the homologation extension.

It could still be a good kart and deal if it’s in good condition.

When I did a web search for the homologation 154-ch-08 I found this part list from italkart.

If you scroll down it shows a list of parts for that model, Supersonic.

Thanks for the input James. I took at look at the link a bit and will do a bit more research. It is stamped as a Rapido on there also, I just didn’t get a good pic of the whole thing.

Do you have picture of anything other then the chassis plate? The brakes, hubs, etc will help identify year.

Scrolling down James’link we get the actual homologation document 154/CH/08.
The pages of the document are dated 2002.homologation valid 6 years. Jan 03- Dec08.
I thought we had established elsewhere that the last number indicated the expiry date of the original homologation . 08=2008.
It is clear that the validity of homologations can be extended, in 3 year ‘lumps’ but a chassis originally homologated in 2002 for 2003, still in production in 2018.???
Classes requiring CIK homologated chassis are almost non existent, OK& OKJ ?? so from an eligibility point of view no problem .
Bodywork & mountings are a different matter.

From the Italkart dealer I purchased it from:

That isn’t the year of production that is the year of Homologation which is good for 7 years. The design Of the chassis was approved in that homologation Period.

Sorry to ramble, it was meant as a fun kart. Overpaid for a 2008 or older though. Bought from photos only and had it shipped. Never saw homologation though until I got it.

Yeah that’s a little murky to say the least. I guess one could make the argument that it was still being made beyond the homologation period (which begs the question why even have a homologation tag on it), or it’s new old stock.

You could try Italkart Italy and see if they can date it based on the serial number.

It is clear that the validity of homologations can be extended, in 3 year ‘lumps’ but a chassis originally homologated in 2002 for 2003, still in production in 2018.???

The homologation year is the start of that homologation period I believe. This particular homologation was valid for six years, so that puts it at 2014. Still a bit shy of 2018. Maybe there was an extension, but then I would have thought the year on the homologation plate would reflect that. 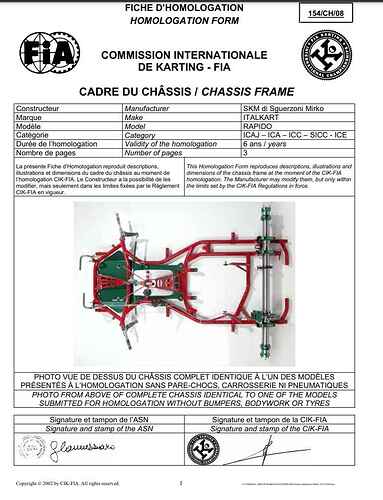 All that said Scott, you may still have a good kart… Just maybe not exactly as it was described.

My chassis actually does look different then that one. I can post more pics when I figure out how to with the iPhone. Maybe all is fine, just a strange plate on it. I am not as worried about it as it may sound. Just very confused on whole date thing. You all have been very helpful.

Yeah I can’t make sense of that one at all. Maybe it (TG16) was a repro of an earlier model, but as you probably already know 026-CH-99 is homologated until 2021 according to this link:

Well, that blows my whole year theory out of the water. Good find.

Here is a picture of the front of the chassis. This is what is really throwing me off as to year. I can’t seem to find any year Italkart chassis that has this type of a steering shaft support and no form of heel guards. Everything I see going all the way back to 2011 has two round tubes and a heel support cross member that is adjustable. Any more ideas, you all have been spot on to this point. 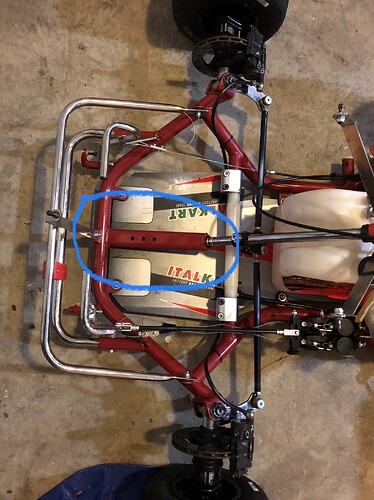 Those are 09+ Brakes/spindles and color scheme. Send that pic to [email protected] and I bet they would be able to help you out pretty.

The Laguna is based on the Rapido, and debuted in 2017, yet shares the same homologation.

I think that since Italkart’s real market is outside of Europe, the homologation is kind of superfluous, which might be why it’s not current.

The brakes and caster/camber adjusters are different (the current chassis use the Sniper system) but the front hubs are the same. I also don’t recognize that steering support, but there’s quite a bit of variance there among Italkart years/models.

Thank you for the input. That is very useful info. It is something that I may end up selling now so any help is greatly appreciated. New have been so busy that we haven’t even been able to get to the track to try it and have now started going a different direction away from the karts. The boy needs to try it though for sure as he has not run a shifter yet.