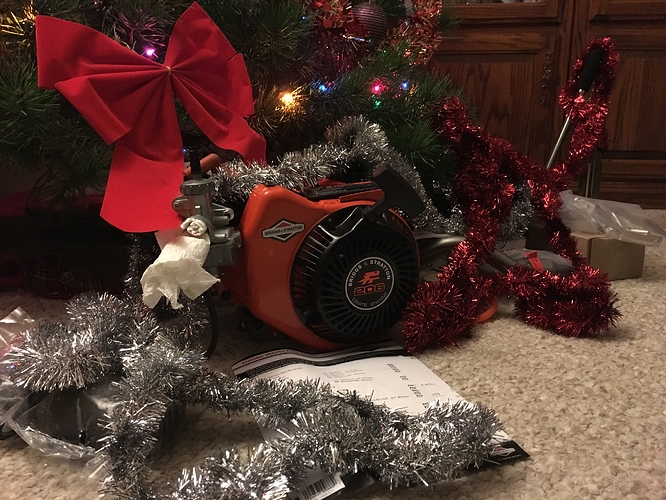 Well, Santa came early here and fulfilled a big part of my wish list. Anyone else getting kart parts for Xmas??

Not quite parts per se, but I’m updating all by driving gear below the neckbrace, which was upgraded last year. Shoes already came in, gloves will hopefully be on the way soon, @tjkoyen did an awesome job getting me some custom colors on his newly released gloves because I figured loud and obnoxious is the best way to design things, and I’m saving up for a suit that’ll hopefully be in around Christmas.

I have a big one coming. If that carbon axle posted on the Kartpulse FB page caused that much controversy this one will really stir the pot.

I have no idea what this is. Will there be a video?

Yes sir! It was gorgeous looking.

I have no idea what this is. Will there be a video?

Ah, how did that work? I’ve thought about doing it but figured it would be too stiff?

As its almost impossible for anyone to define why an axle has the effect it has on kart handling, its probably too difficult to say how a carbon fibre axle would effect it handling and it would entirely depend on the composition of the composite and its layup.

I actually think a kart makes way more sense assuming the axle is rigid (i.e. doesn’t bend at all). So it might be better.

But its still illegal in most series.

The axle (including hubs etc) topic is a super interesting one. It makes a difference for sure, but putting it down to flex just doesnt make a lot of sense if you consider the sidewalls of your tires determine the peak load.

Carbon axles are fun, but illegal in practically everything karting. The thing I dislike most CF in general for lower budget racing is that you cant inspect it visually for cracks, like you can with metal. You have to examine it with sonography.

But its still illegal in most series.

Oh, it was totally illegal in every series I know. Never used it in racing though, only practice.

In retrospect it was scary considering if it did ever fail it wouldn’t bend, it would just shatter into a trillion pieces probably killing me in the process. It was super bouncy and soft.

Cool fact: A 25mm 1980 Swiss Hutless axle has actuially two different diameters: It solid core, 25mm before the bearings (on the ends) and 28mm in the middle. From a time when manufacturers were experimenting with torsional rigidity.

The axle (including hubs etc) topic is a super interesting one. It makes a difference for sure, but putting it down to flex just doesnt make a lot of sense if you consider the sidewalls of your tires determine the peak load.

Axles make sense if the material is actually different, or if the wall thickness or overall diameter is different. It makes no sense at all as they are currently sold and I still have a niggling feeling that its all in the drivers head. I can’t remember ever changing an axle for myself up until 2008 (for setup reasons) but I was whipping them in and out for drivers I was working with at the time.

I have a vivid memory racing KZ for Danilo Rossi in 2006 where the kart I had, had too much rear (or push). Not once was an axle change even on the cards. It was only when he went out in the kart that they decided it was the frame.

Oh I had no doubts about legality, but I was wondering how it changes the kart. As far as your comment about knowing how it affects the kart, have there been any tests done to specifically examine individual properties of an axle would affect the kart?

Oh I had no doubts about legality, but I was wondering how it changes the kart. As far as your comment about knowing how it affects the kart, have there been any tests done to specifically examine individual properties of an axle would affect the kart?

No clue. I’m sure people have put axles through dynamometers or something like that.

It’s not impossible. It’s just that no one is interested enough to spend the money to prove what the relationship is between axle and chassis. (Or, if they have, they haven’t documented it in a publicly accessible place.) - The ROI would be super minor, besides awesome knowledge.

The practical application of just swapping the axle and driving it again, gets racers 99% of what they need to make a decision.

I’ve come across stuff tests that people have done in the past. Deflection/torsion tests. It’s been a long time since I saw them though.

I’ve seen tests that show no difference. Yet to see physical evidence to show a difference between different axle specs with the same dimensions (other than hardness).

New tires, chain lube, and new axle nuts for next season. I already own a new clutch, chain, and gears. My plan is to take the kart completely apart and do a solid cleaning. I’ll put a bow on it just to make it festive.

I’ve got my new helmet that I’m working on that was supposed to be for Vegas, but as usual is getting pushed back to probably not get done in time for Christmas.

How many gifts do you have on the shelf for others?

My gift (to myself) arrived Monday - Arrow ax-9 4s