In my second season with the KA senior, they are great motors but I experienced an unusual problem today. It was an usually hot may day for us in the low 90’s and somewhat humid. I am geared where I should see about 15.5K at the end of the longest straight. However, today I was only seeing about 14.9K and the motor felt like it was struggling to reach max rpm. EGT maxed about 1050 and spark plug looked chocolate like. I did switch to a different oil for this race, from Motul to Elf but otherwise nothing else. Any thoughts or ideas?

What are your carb settings? All signs point to it being way too rich. As it gets hotter out the air loses density. As the density decreases the amount of fuel required to achieve the same air/fuel ratio decreases. Naturally, you will have the carb set with more fuel on cool days and less fuel for hot days.

I believe that is fairly close to where I was today. With the EGT reading I didn’t think leaning was the answer.

Things to maybe look at-
Wind both jets in and reset regularly- I’ve found that sometime gunk builds up on the needles if left for a while.
Needle lever is generally set flush to the top of the carb, try bending the lever up half the width of the lever. I once had an issue where the engine wouldn’t rev out correctly and this fixed it.

As Zach said, every indication and symptom points to too rich.

A skill that is disappearing as engines become more and more foolproof is the ability to tune the carb on the fly during the race. While it isn’t as necessary as it used to be, it’s a good skill to have for this exact reason. A little needle tweak in the race could give an immediate answer as to the problem.

I’d also check your air filter. For the last couple of races, I’ve been having a problem with slow starts. We found a collapsed air filter, which likely was folding up and restricting air flow during the start. Put in a new filter and the start was normal. Nothing is worse than getting passed on the start by 5 or more karts in 100cc TaG.

Hehe. I remember seeing John Bonanno adjusting his carb on the fly. I thought it looked totally badass in a nonchalant way. “Pardon me a moment, I must make an adjustment and smoke you next turn.”

I used to (had to) do that with the Yamaha. I find trying to tweak the settings on the KA more difficult and maintain pace as both needles feel the same. In this case, I did not try adjusting settings on the fly.

Hehe. I remember seeing John Bonanno adjusting his carb on the fly. I thought it looked totally badass in a nonchalant way. “Pardon me a moment, I must make an adjustment and smoke you next turn.”

I ran Leopard back in 2005(?). The throttle linkage was spec item and would brake because of bad angle with cable. I had to run half a race operating the carb by hand. It was difficult to be smooth, but it was cool. That day someone who I did not get along with at all came up to me and said “that was bad ass!”. Ten years later a fellow driver came up to me in SCCA and told his friend “this is the guy that ran the race with a broken throttle cable”.

It was kind of wild. I would not want to have to do that often

My favorite was adjusting rotaries while driving. After a while you could do it without looking… but if you got it wrong, there were consequences…

Note location of jet screws in relation to the drive sprocket. 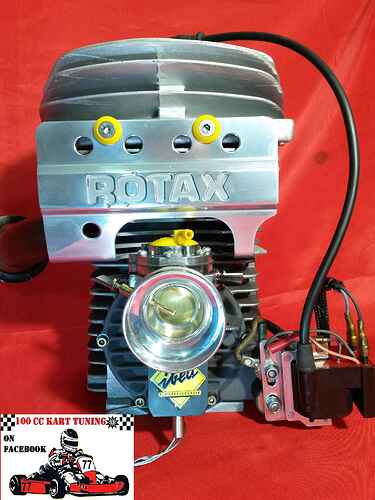 Did you keep your fuel/oil ratio the same when trying a different brand. Plug appearances can change from fuel to fuel and oil to oil as well.

As pointed out, it could be that you needed to lean a little to compensate for the lower air density at higher temps. Sometimes EGT can be misleading that regard when looking at absolute temp, vs the trend it’s following on a given day. Ideally it should reach a peak at the end of the longest straight. If it goes past a peak and drops you are likely lean.

Any other changes to the engine since last race? How fresh is the piston and ring?
Reeds in good condition?

Lastly: how were the minimum RPMs? Is it possible the kart was bound up in tighter turns with the higher temps.

James you make some good points…

The fuel ratio stayed the same 16:1, the IAME manual states 20:1 but the richer mixture is recommended by IAME East.

As for the EGT, the temp kept rising down the straight and dropped when off the throttle. Its my understanding this is what should happen. It has about 4 hours since rebuild and reeds.

Minimum RPM is tough to tell. Conditions weren’t ideal. I was struggling with a flat slide which I think may have contributed to the lower RPM, but I could feel/hear the motor struggling. It was subtle, just didn’t have the usual zing.

All the information is pointing to a slightly rich condition i guess.

Robert, you may have answered your own question. With a handling problem, you may have been getting onto your long straight slower than normal and that caused the lower top rpm.

This is what I am still debating getting a Lambda/O2 sensor for my son’s KA100. Set it to green and go.

Easitune, SupaTuna, or the Mychron seem like simple ways to dial in the needles without guessing and trying to read plug colors.

I spent plenty of time dilaing in Walboro and Mikuni carbs to see the extra value in a known system that removes a lot of the “noise” in tuning.

I’ve considered this path as well, but it seems most series in the US don’t allow them. I guess that I could have a different pipe with it and use them for warmups to tune the carb and hope it doesn’t drastically change for the race, but doesn’t seem like I’m then getting full use of the tool.

If the rules are similar to our local clubs, you can have it on the kart, but must be disconnected from your Logger for racing. So, you would not have to change your pipe, but merely unplug the sensor. I agree it defeats the purpose if you can’t use it during the race. You still have the EGT, which can give you similar information and the ability to adjust the needles on the fly unlike the Mikuni or Dellorto Carbs.

I realize atmospheric changes can fluctuate in that time, but most of the tuners are asking engine owners to set it to dyno tested settings anyways.

I would LOVE to be able to mount an o2 sensor on my kart for a fine tuning tool, but I’m not sure how I would know what target value I’m looking for for maximum performance.

The power republic video states generically lambda values of .90 (13.23 afr) at the beginning of the straight building to something near .10 (14.7) at the end of the straight.

There’s absolutely zero data that I’ve been able to find that’s specific to KA100 as I’m certain engine to engine is going to be slightly different for optimal performance.

The only way I can see this being of value is to spend the money to take the engine to the builder and have them dyno with lambda so that you always know what your target should be. Trying to come up on that target on my own would take piles and piles of testing data / time / money.

For now I’ve at least got EGT targets that should get me pretty close. The lambda would be a great way to double check as a couple of times now I’ve had EGT’s that I didn’t think were high enough, I’ve leaned out the carb to try to get them higher when the mixture was already too lean resulting in even lower EGT, decreased RPM and loss of power. Oddly enough you can be in a space with a KA where it’s too lean and doesn’t have a characteristic bog…it just doesn’t pull as hard and it can be pretty frustrating to get through because the first couple times I had that happen I didn’t immediately equate that I went the wrong way on the needles because there wasn’t a lean bog.

The Australians have been running these for many years. They should have more than enough intel to baseline our needs. The Aussie built ones forego numeric values and go for the Red/Yellow/Green system.

I would reach out to Easitune and Supatuna or even the Power Republic guys and narrow in on your use and fuel type.