I have finished building yet again a new to me kart and decided to finally scale it before hitting the track. 2017 CRG KT2 X30 - senior - minimum weight 365 lbs.

Alignment as per CRG’s manual was done directly before scaling, brand new tire’s all set to 9 psi. Only had 1/4 tank of fuel because i still need to buy more.

As you can see from the screen i am 10 lbs short (i have four 5 pound weights on hand) I plan to add 10 lbs and run a lot more fuel.
They told me to just add 10 lbs on the bottom front portion of the seat or play with the two 5 pounds and place them near the front or where ever. Basically just play with it.
Also told the balance looked great until i got home and saw the picture.

My concern is how the front right is 8lbs heavier than the left front and how the left rear could weigh more than the right rear. I thought the right rear is always the heaviest?
Im waiting to actually be able to hit the track and will toy with the weights but also set a day use the scales again and try to be more thorough. Im just looking for suggestions and comment for now. Thanks, Nick 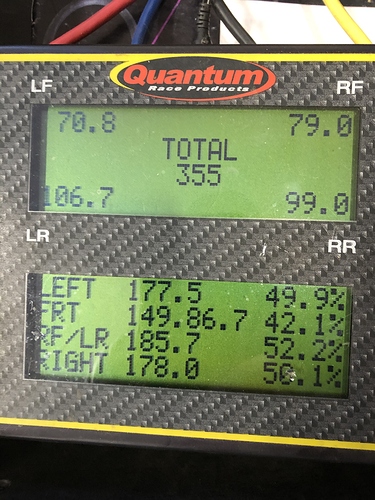 Those numbers look pretty good. I never scale karts anymore, but back when we did I would have been happy with those spreads across front and rear. Keep in mind that any small movements in your steering is going to affect your cross weight measurements, so do your best to ensure that the steering column (not necessarily the wheel) is perfectly straight. If you’re able to use Snipers on the front spindles that would be an easy way to check.

If the steering was truly straight for this photo then I would first get the gas tank filled to where you usually run your fuel level, and go from there. I’d also be sure to fill the radiator if you haven’t already, though that may work against you just slightly. If that doesn’t change much then I would add one 5 lb piece to the middle front of the seat (crotch underside), and one 5 lb piece to the back of the seat, near the bottom on driver’s right.

If you still feel a need to correct the cross, then you could try shifting the seat one 5mm spacer to the right. If it’s already all the way up against the engine side strut, then just run it.

I’ve heard/read many things about kart weight at the corners, the most common being that, within 5 pounds left to right (front or rear), the "national " teams are good to go. I’ve also seen a DETAILED video where weight is brought to within 1/2 pound by “jumping” the frame (a crude way of bending the frame slightly to get what you want).

The fundamental problem is that a kart is like a slightly uneven 4 legged restaurant table – you can put napkins under the leg that is too short or you can put weight at the corners. To determine where to put the added lead weights on a kart (NOT a table), we take into account the front/rear weight ratio. Almost everything I’ve read says to start with 57% rear, 43% front – and that has never worked for me. With the back angle of the newer Tillet 11 series seat being 58 degrees vs. something like 47 for the previous 8 series, my ratio is 61+ rear, 39 - front as my upper body weight is leaning further back and my kart handles (for me) better than any I’ve had before.

These are the numbers I came up with, pretty much the same as yours, adding front and rear cross. 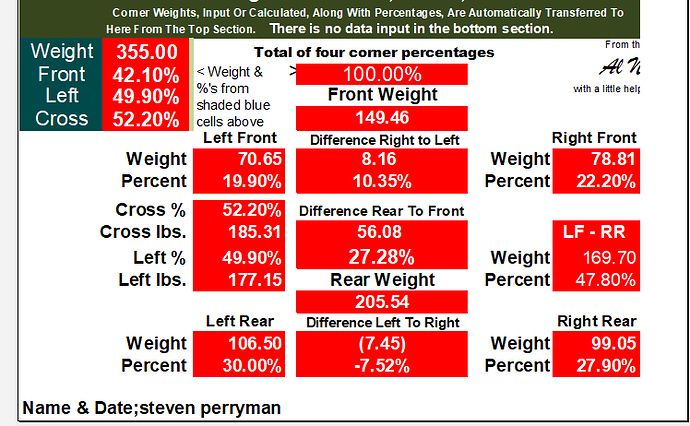 I’m with Evan on not scaling. I stopped scaling and got way faster because I stopped chasing imaginary weight problems.

If you really really need to fix the cross, loosen the cassette bolts on the left rear and either let the axle settle block the frame up and bop the top of the cassette with a hammer to “raise the corner” then crank the bolts back down.

Literally the only reason we scale is after a wreck to see if we jacked the chassis up bad enough to need the table.

Check your tire rollout too.

I’m with Evan on not scaling. I stopped scaling and got way faster because I stopped chasing imaginary weight problems.

So you did scale to begin with? How many times until you got it right? And if you get in a wreck, You rescale it? Sounds like your scaling to me!

What if you change your scaling numbers at the track? To match the conditions? Do you then come home and rescale the kart back to your original setup?

I’ve never put my current chassis on a set of scales.

My last chassis I put on a set of scales one time after hitting a wall doing 45 to make sure nothing was ridiculously tweaked.

We pull our chassis out of the box, bolt the seat in, bolt all the lead on the seat and send it. No idea what it’s supposed to scale at or where it actually scales at.

Do you remember what the numbers were? Front, left, cross?

Nope. Not at all. As long as none of the corners were 15+ lbs lighter than the others, it was called good and we sent it.

How did you determine that number “+15 pounds”?

Honestly, it’s just a number I picked for the left to right variation on both ends.

It seems that scales have been improved upon with the more widespread adoption of the “flat table”. Rather than scaling after an incident that has obviously bent some things, we used a flat table to isolate the exact area(s) of the bend, and correct the locally, rather than the more blunt approach of jumping on it until the numbers “look right”.

If you’re not crashing or hitting things that are bending the frame material, just put the seat in the recommended starting position, and away you go.