So I’m in the market of getting a new karting suit, as the used one I picked up off eBay when I first started was too small (size 58) and I’ve essentually busted out the seems trying to fit into it (que the fat man in a small coat music now).

But I’m torn on whether I should buy a more budget friendly suit in the sub $300 range, or splurge on a more expensive suit by Freem at $700-800. I understand a $500 difference isn’t huge, but it isn’t small either. Thats a few sets of tires at least.

Has anyone done this and if hindsight was 20/20, do you regret the decision or were you glad you spent the extra money?

Yes, but I haven’t spent that much. Around the $550 mark you can get the OMP KS2-R, which is a great suit that is very light (you can always add a layer underneath in winter, but you can’t take one off in summer…) Look for older design and you may find some deals. But overall it’s best if you can actually go in a shop and try them, brands vary greatly in size/fit

Personally, I have owned (and designed/produced) many suits over the years. The real difference I think between cheaper and more expensive suits is the fitment. More expensive suits are going to be more comfortable and not as baggy most likely, with a better tailored fit off-the-shelf.

That being said, the cheaper models by good brands like Sparco or OMP fit very nicely, and if I were going for an off-the-shelf suit, I would probably pick up something like a Sparco Kerb ($279) or X-Light ($575). I’ve owned a couple X-Light suits over the years and really like how comfortable they are and how well they fit.

If I were going to blow $800 on a suit, I would go with something custom designed/fit rather than an off-the-shelf suit.

The kerb is a really great value. I bought one for Nick and it is well made and looks reasonably sharp.

One of the nice things about custom fitted suits is that you can get embroidery and logos/art.

I bought this fully custom suit from Italo at Urace.us. It was just under $300.

Here are the needed measurements that I provided.

Then I gave him an idea of colors, logos, and design I wanted and the designer did the rest. 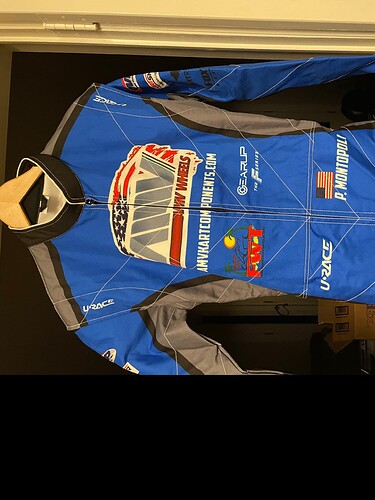 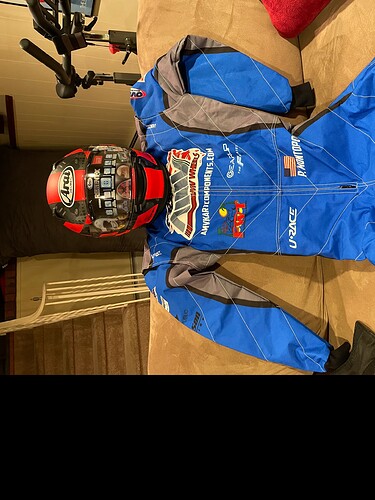 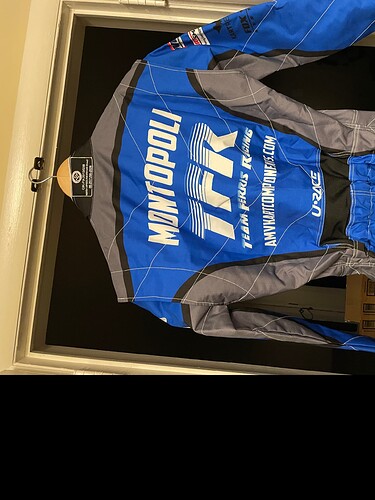 I appreciate the links to other products I haven’t considered.

That suit looks pretty freaking cool for the price compared to the prices of other custom suits, how much do you like it?

If you are going custom just watch out for cheap knockoffs. There plenty of wily textile companies who’ve spotted karting as opportunity to make some money.

Now karting in the US typically doesn’t require homologation by the FIA but some series do. Do they check them against the approved list, probably not.

To add to confusion some of these wily manufacturers will fake it. For example at supernats I saw a “FreeM” suit with a “Wallana Industries” homologation. This is false in two ways, one I’m pretty certain FreeM doesn’t need to use others homologations and two Wallana lost their homologation years ago.

So in my opinion, ask here before you buy. I used to import Torq Racewear and I’m pretty much on top of all the fakes out there.

I got one of Niks torque custom with embroidery for about 550 iirc.

I like it. It is lighter weight which I much prefer. I have a MIR Compkart suit which is nice quality, but too thick in my opinion. I am seldom cold in a kart, but often too hot.

In fairness, I have not worn the suit much yet. So far, so good. Be careful of sharp edges on seat bolts. I was not and it wore both my Compkart suit and Urace suit, but because the Urace suit is lighter weight, it was more noticeable.

Quote
For example Paul’s suit, it’s looks like Urace is using Speed Race Wear which is a Pakistani manufacturer.

I just looked at the suit. You are correct. It has a Speed Race Wear homologation label.

When I got into karting about 4 years ago I bought a K1racegear.com suit that was custom sized. My dimensions won’t work for off the shelf so I had to go tailored. The price at that time was very reasonable but there was basically 2 choices of color. Honestly, its kind of an ugly color combination and layout, but it fits. It also has held up very well. I had a seamstress do my measurements for me. I haven’t looked into them lately but assume they still do this.

I have a MIR Compkart suit which is nice quality, but too thick in my opinion.

I was leaning toward the Sparaco X-Light but there new design are 3rd world ugly IMHO. Being in Floirda, I need a light suit that will still offer some level of protection. The Kerb looks like a good suit, not sure if its cool enough though?

Seems difficult to find something both light weight and durable.

The kerb is thinner than my Torq but thicker than a K1. It is nice for the price.

when you’re sliding at 60

Does level 2 homologation have testing / standards to which a suit must perform to receive certification?

@NikG I suppose you know from your work in the space?

This is as far as I’m willing to dig:

I should probably note that I’m a jeans and K1 Jacket guy anywhere I’m not required to wear a suit.

This includes running my KZ.

It’s all on the FIA karting website but from memory there are abrasion, resistance to contact heat, resistance to tearing and tensile strength tests. Plus a requirement to keep regular material tests for some amount of batches.

Custom suits are like painted helmets. You can spend as much as you want to look cool, but its not going to make you any faster. I know a lot of people put a lot of stock into “comfort” of the suit, but I cant tell the difference between any of them when I am in the seat.

I buy my son cheapos cause he grows through them so fast. Myself, I have been wearing the same K1 jacket for going on 10 years now.

When I do wear a suit, it is off of ebay. This time of year, you can sometimes find folks dumping their stock of last year’s models.