Those of you who karted both as younger people as well as older 35-40+ (Whenever you realized you weren’t young anymore, largely physical changes ie getting heavier, health issues, etc)…

Can you describe how your kart racing is different today as opposed to then? Presumably you were faster (but maybe not). It also can be about non-results oriented stuff like endurance or whatever.

In addition to physical changes, did anything change mentally that made you more or less “good” (however you personally define that)?

Well I’m getting a bit older, as I’ll be 33 next year. If anything for me karting is getting more fun.

I realized a few years ago that the money I was spending karting allowed me to get on the track way more often and faster than if I had decided to go club car racing. So I don’t look at any of my car racing friends with envy.

The big thing for me, that has always gotten me, is how much hype the younger drivers bring to themselves nowadays. Especially as the majority of them have no idea how mom and dad afford for them to go racing, and then when they are old enough that they have to pay for themselves, they stop.

For myself, I’m only just getting into karting through a Rental racing league at 35. I wonder whether I would’ve been any faster or better suited to karting when younger. I am much fitter and in better shape (read:lighter) than I was in my younger days. I also have some experience in driving trackdays now. Granted I haven’t had any karting coaching yet, but I feel my trackday experince has helped me ‘Trust the grip’ more than I would’ve even a few years ago.

I remember after my first return race, i was exhausted to the point of feeling nauseated. I started training more to get into shape. That’s when I knew I was getting older - I was doing supermans (lower back exercise) on my living room floor and heard a pop from my ribs. Turns out I separated one of the floating ribs from the cartilage and it was quite painful and took 3-4 months to heal with physical therapy. Luckily the injury occured at the end of the karting season here.

Otherwise, karting has become more fun since I don’t really care about winning, and just dicing it up mid-field is my happy place.

Interesting discussion. I’m not sure when exactly that a 35-40 year old driver became considered old. Certainly in Indy Car racing’s “Golden Age” there were numerous drivers that continued winning well into their 50s.
Many of the front running drivers of the fiercest of race cars the Sprint Car are in their 40s and 50s and a few in their 60s that are a threat to win any race they enter.
Looking at kart racing in my preferred karting discipline Road Racing the Fulks brothers-Randy 60 something and Rick 50 something are the drivers to beat in any class they choose to run. I’ll even throw my name in the hat as I’m still very quick at the age of 72.
Local to me at the ultra tough KRA series at NCMP (New Castle Motorsports Park) some of the dominant drivers are in their 50s to early 60s.
One trait that all of these drivers share is an athletic sort of body type whether they’re are actually all that athletic or not seems to vary.

nteresting discussion. I’m not sure when exactly that a 35-40 year old driver became considered old.

My apologies. I wasn’t implying that those of us over 35 are old. Well we sort of are… but karters are forever young.

Why I was asking has more to do with how does someone who experienced the learning curve young feel about their driving as an older less spry individual.

Both good and bad. Ie you may be less fast but you may have found that as an adult you are a better driver.

Basically I am curious about age/experience/performance.

Are the depredations of age somewhat offset by experience and wisdom? Can an older guy compete successfully against younger guys?

Finally, if you take the physical out, where does that leave us older guys competitively? (Sim).

From what you have articulated it appears that folks are still fast even into their 70s. This is good news. I assumed my reaction times would go to crap.

I just made this, and it might be relevant. 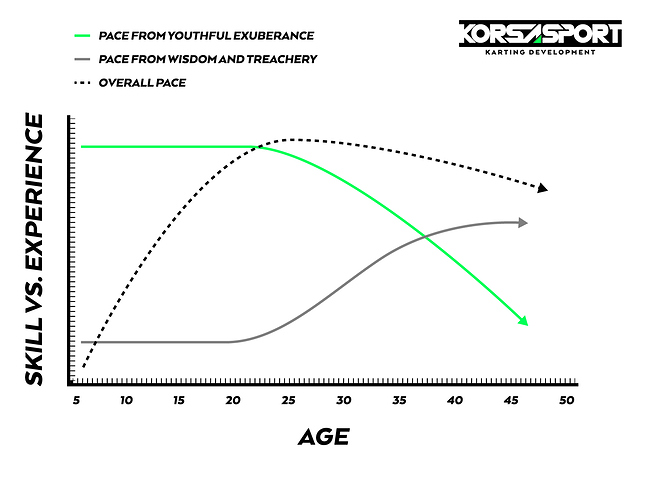 There’s no math or numbers behind this because it’s been about 11 years since I took Statistics in school and I have no idea how to make a graph anymore. But it illustrates basically how drivers age and change as they get older based on myself and most of the guys I grew up racing with and how they have perceived their overall driving through the years as I’ve discussed with them.

Right now, approaching 30, I think my physical skill is on the decline, in fact I can see it in action… But I’m still learning plenty on data, racecraft, tuning etc. There will be a point though, where I won’t have much left to learn that’s going to translate into real pace, and the overall pace curve will keep declining as I age further and further until you have to excavate my dusty ass out of the seat each session.

From what I’ve seen in recent years, a driver is usually at their peak speed around 20-25. At that point they’ve got lots of experience and know their equipment and racecraft, but they aren’t dumb and overzealous and don’t crash or make as many mistakes.

Again, this isn’t for all drivers, I know we are all different, but it’s how I perceive it.

That is helpful from the mouth of a top tier guy. I would expect that a guy like you will look like Bonanno in a couple decades. He’s still beating the senior (and masters) fields. He’s just that good. So, in your case, I bet the crossover is a lot slower.

Actually that’s an interesting question… how would a Bas Lammers fare against someone like Norberg? He’s over 40 I think (Lammers).

So I agree with Lewis Hamilton (lol) that this age is probably the peak of my ability. I don’t seem to have lost raw pace but I’m way smarter about the way I go racing (like @tjkoyen wisdom and treachery). What I have lost (which could be gained back) is physical fitness but that is due to a general lack of effort/time and not being in a kart very much.

One pleasing point from my last race was a front running senior driver weighted up and joined the TAG Heavy field for the Sunday and was slower.

@Bimodal_Rocket, how rude, Lammers is about my age (we raced in Formula A Euros in 2002 together) .

Not a perfect example but Ben Cooper was 28 and out of racing full time for a couple of years when he came and won supernats in the pro class. Granted he has a world class track and the Lupien brothers to practice with, but if you watch the race it was his smarts (as well as his pace) that won it.

Thanks I thought mr Lammers was 40+ since he raced against John in Brazil in masters. Maybe masters is younger in intl comp.

Alright, my 2¢.
I’m 44. I started karting in the mid 80s, and from ‘86 to ‘93, I was at the track every Saturday from mid April to Halloween, sun up to sun down. Going to college meant that road racing, which we dabbled in before, became the norm for us, because it fit my availability. That continued until about almost 5 years ago, when we returned to sprint racing.

Sure, aging doesn’t help, but the one thing that makes the biggest difference is seat time. Think about when the general consensus says we slow down: the mid 20s. We might go to college, get a career, get married, get a mortgage, have kids. All these milestones in life, though many of us wouldn’t trade them, take away from seat time. Of course, being younger can be an advantage, but look at who’s fast: the drivers that bang it out every single weekend regardless of age.

Sure, at this point, I need to be more conscious of my nutrition, exercise and hydration, but I’d have to pay more attention to those things regardless of whether or not I’m karting, and, because I do, I have enough stamina that, if we tacked two more heat races to a Route 66 daily schedule (if time ever permitted), I could handle it. What keeps me from going faster is that seat time thing that those adult responsibilities prevent.

@Bimodal_Rocket Its usually around 30-35 depending on the class. Clubs or regions might do something different.

I just checked his age, he’s a year younger then me

Thinking about this topic a little more and using my own experience as data. I had a lot of success Nationally in my late 20s early 30s but as the fearlessness of youth faded a more experience, more intelligent, more technically savvy driver became a more consistent threat.
Natural reflexes were probably long gone but conditioned reflexes along with a more experienced approach made me a more consistent threat.
I’d say my real peak years were in my late 40s to early 50s, my track record seems to back that up.
I will add that since I came out of retirement caused by a serious injury that that the tendency to take chances in traffic is greatly reduced, the win or die trying instinct has left the building but much of the speed is still there.

Thank you Greg. Can understand your desire to not get hurt again. It’s interesting that your late 40s early 50s are peak.

Nil,
Odd question but it appears you are/were intl pro.

Are PEDs and/or stuff like beta blockers and testosterone therapies the kind of things that happen quietly in the background of the big money karting or is karting free of that?

Thank you for sharing that perspective.

Also, I will say that’s why grouping racers by age categories makes sense for general karting.
I wouldn’t want to compare a heavier 40 year old man, to a more youthful 20-something, just because the same reason that TJ expressed that that chart. (Genius)

On an slightly related note, I would argue that for some drivers, they’ll get quicker as they get older, because they never reached anywhere near their peak when they were young, for whatever reason. However, the amount of risk and youthful over-driving that they’ll do will greatly decrease, beause of experience, risk of recoverying from injury, etc.

This is true. I worry about getting hurt and I’m the fastest I’ve ever been

. And, I’m just gonna get faster as I learn.
The key is going to be how my body holds up.

When i was racing the euro scene 2000-2002 and 2006 there wasn’t much going on like that. I mixed my own recovery drinks and the Italians insisted we eat pasta at lunch. There was somewhat of a problem with some drivers using cocaine because they though it improved their reaction time but I don’t really know how widespread a problem that was.

It seemed to get a whole lot more professional with the KF engines in 2007 (maybe because it also got a whole lot more expensive). That’s when you started to see team massage therapists and nutritionists turning up.

The only substance I’ve heard being used recently is beta-alanine which helps to block lactic acid build up in endurance events. Cyclists supposedly use it.