KartKraft has finally shipped something to the general public. At this point it is in early release status which means it’s undergoing active development, I’ve included the roadmap below.

Originally known as KartSim about 8-10 years ago, it finally was released on Nov 1.
PC only as of this point. (Xbox and PS4 are slated to come in Q3 2019 according to this article

It looks great, so understandably It’s decently heavy graphics card wise. Budget about $120 for a used graphics card to play this at minimum spec.

Need a computer or parts to run KartKraft?

The iRacing Flea Market group on Facebook is a good place to find a deal on a computer for simming. 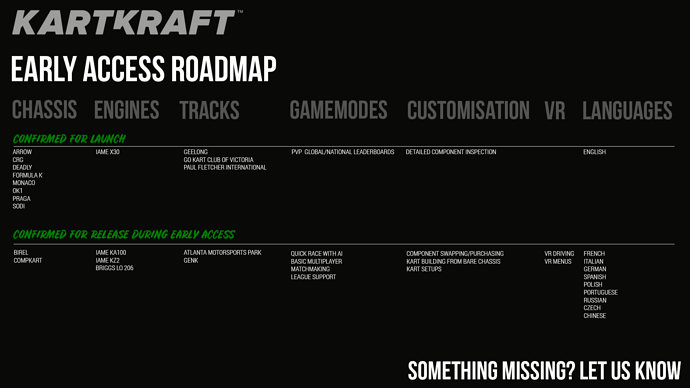 I’m currently hunting down a sim rig JUST to play this. Like some of us, I’ve been waiting since the day KartSim was announced for this game to come out.

If you’re not already a member, the iracing flea market group is a good place to grab a decent deal.

This is the place to buy, sell, trade anything and everything for Iracing.

I’ve heard that there is a XBox version that is planned to come out. If it comes out on console, I’m going to lose my mind happy.

Yeah I read that, and if it’s true I’m also going to lose my sh*t.

It may be time to bust out my thrustmaster tx and show you children a thing or two about speed.

Yup! I asked them and they said the full release will come on Xbox One as well. I decided to just get a better laptop which I need for college anyways and get it on Steam for myself. Once I get that laptop I’ll let you guys know what I think

Surprised it doesn’t have MP. Kind of a letdown, but maybe it will come out later.

So I am a bit of a computer luddite.

Can a program like this be run with some sort of vr type goggles? I think it would give a more accurate experience as I imagine you need some crazy monitor setup otherwise.

Got a bent up kart frame behind the shed…hmmmm

So I am a bit of a computer luddite.

Can a program like this be run with some sort of vr type goggles? I think it would give a more accurate experience as I imagine you need some crazy monitor setup otherwise.

Got a bent up kart frame behind the shed…hmmmm

VR is supposedly better. I honestly don’t know how much a game needs to support VR goggles to be of benefit or how much the goggle do after the output. The monitor setup in not a bad situation. There are some Youtubes on how to adjust the view so the look becomes best for sims. Some of it will come down to your computers graphics card. I did use VR once and it took a little getting used to. It was in a fighting game & I had a real problems staying still. In real fighting you manage distance by sometimes advancing, retreating, getting off the X, sidestepping, etc. With the VR you can’t see your surrounding from the real world.

I had a friend dumping a frame. I took it for several reasons, but ended up giving it to someone with a bent frame. It happened to be two numbers different on the serial number - like xx06 & xx08.

I’ll be curious how this will work with younger drivers. My son currently messes around with iracing and struggles with car control. Also the adults don’t appreciate racing against kids.

That’s really down to mind management, more so than just age. If you feel like a simulator is a helpful tool, then it becomes a more helpful tool. If not, then not.

It’s just most drivers don’t apply using what they could in a simulator (IE: Game or sim) into their real-life driving, so they just don’t make the connection, rather than their not being one.

As a long time gamer, generally the squeakers can be a bit much in that if you get a group of them together, the volume/obscenity level increases exponentially. When they are on best behavior (playing with adults who know them), they are fine.

I’ve heard that there is a XBox version that is planned to come out. If it comes out on console, I’m going to lose my mind happy.

According to this article (which doesn’t really cite a source), KartKraft on Xbox and PS4 is coming at the end of 2019: 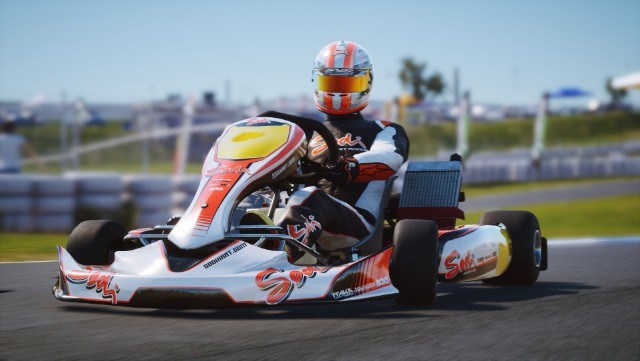 It promises to let you go from zero to 60 in just 3.2 seconds, and has today arrived on Early Access on PC, but the big news is that the extreme racing sim of KartKraft will be coming to Xbox One, PS4, VR and PC officially in 2019.

I asked the devs, they’re releasing a console version after the official release

James, I mean, if the developers actually keep to their timeline and don’t have three more years of hype, then it might come out on console.

Jim Broadbent (the YouTube racer, not the thespian) has done a mini review.

This seems like a pretty fair review of the game at this point.

I have no experience with the game yet, but one thing that’s been bothering me is the plethora of reviews from people who:
A.) Have no idea how to set up their wheel
B.) Have never driven a kart in real-life before
C.) Are comparing the handling/feel to that of CAR sims

The game seems to have some issues right now obviously as an early-access title but it looks beautiful and I’m sure it’ll improve.

Jim Broadbent’s youtube-clip makes me pretty enthousiastic. I watched it with sound off so I’m yet to hear his review but the onboardshots make me happy. The graphics and the scenery are awesome and the physics of the kart seems quite ok. I have seen previous onboards with dramatic understeering karts (could be the driver’s input) but the kart in the video seems nimble. This makes me wondering whether to setup a computer and a wheel and seat at home. The only thing that is holding me back is that in a simulation you cannot feel the kart.

For me the 14 L for the game is a non issue. The issue is I need the wheel, pedals and all that. Worst case scenariao would be is i don’t like any kart sims & I just drive cars on sims.

In the past when considering sim vs real world, real world always took precedence. If I work out and hour a day vs “play video game” an hour a day what would be better. I think sims can help with certain things, but am of the mindset that RW beats sims every time. I made the decision that If I can’t physically handle karting everything else was secondary. So it’s driver prep, kart prep and all the other must do’s and finally sims.

That said It would be neat to do sims for certain reasons. There is an aspect of sims I think could be beneficial if the developers would build it in.