We have an upcoming race at a track that last year saw a lot of karts flipping. Am I on the right path to think that raising the spindles and axle would be wise? We usually run at middle height as a tradeoff to avoid bottoming out on bumpy tracks (which this is.)

Any advice is welcome!

I’d focus on the rear and/or seat position first. Wider track will reduce lateral load transfer, so if you have ability to go wider on rear, try that. If not, try moving seat down, towards the rear, or a combo of both.

THank you for the response, and I updated.

I am at full width in back now. I was hoping not to drill another seat for this track but that sounds like your recommendation. It is fully low now, just a couple mm above the bottom of the chassis tubes. He didnt flip last year but he was up on 2 wheels a couple of times.

Should I consider higher tire pressures to encourage it to slide instead of digging in?

John, flipping as in someone turned in and the kart literally bicycled and flipped? I’ve 2-wheeled a couple times and only once was it from not making contact with someone else first. Hard to believe you’d be generating enough speed/grip in LO206 on what I assume is relatively hard tires for the class.

Should I consider higher tire pressures to encourage it to slide instead of digging in?

That’s one you can add to the mix for sure. You definitely have a few options you can try and really you’ll have to try different things to see what might work.

Add reducing caster into the mix, as well as being very deliberate and observant of steering input.

Sticky track and super narrow track width of a 206 (and American 4-stroke karts in general) easily can lead to bicycling. Doesn’t even have to be that sticky of a track. Even the KAs can bicycle on the new section at Dousman, because it’s finished in sealer. I’ve seen lots of 4-strokes get up on two wheels on a normal club day, even in the old section of the track where there isn’t sealer.

James gave good advice on how to tame a bicycling kart, but keep in mind the end goal is to go fast, and taking all your weight jacking out to keep the kart settled more might lock it down to the track and make you slow, so just try and find that fine edge where the kart is still working but isn’t wanting to flip over all the time.

You might make the kart nice and flat by pumping the tires up and sliding it around, but you might also just overheat the tires and compromise the actual handling and go slow.

How much more narrow do 206 normally run? Is this just to get the kart to transfer weight faster at lower speeds & harder tires?

Depends on the ruleset, but some places have a MAX width of 50" for 206. I’ve coached a couple Masters guys in Canada who are bicycling constantly because they weigh 230 lbs and the kart is barely wider than their seat.

And there are different philosophies to tuning the kart for that little power and that hard of a tire. The Euro karts tend to run a more traditional setup you’d see on any 2-stroke kart, though narrower usually. American karts tend to run narrow with not a lot of mechanical scrub in the kart, so it relies more on tipping the kart up to get it to rotate rather than caster and frame flex. Or at least that’s how I understand the American karts… seems like black magic to me.

Interesting, didn’t know that was a thing. Why would a club or series have a ruleset mandating such a narrow rear with besides the somewhat universal 1400mm (55.125").

Thanks for the feedback!

This is S-4 at Sutton Ontario.

Must be some weird carry over rule. Some old boys club decided no 4 stroke is going to run wider than 50" on their watch! Or an old paddock wise tale that anything wider is going to make the karts too fast, blasphemy!

Googling this track now. Must have been wild just watching kart after kart start flipping by themselves.

Hahaha…not ‘on their own’ for sure, but it was a problem we werent alone having. Maybe the corners are more off-camber than it felt from the track walk? He is 11 so feedback is still something we are working on…

This is S-4 at Sutton Ontario.

I was wondering if you’re in Canada with the reduced rear track width rule.

Reminds me of formula A on sticky tires, if you came out of certain turns just right you could get up on two wheels and keep it there for the straight.

My old school Formula A advice (see profile picture) when we were 2 wheeling relatively regularly would be to soften the kart as much as you can, get it to flex.

Then drive harder into corners and dont apply the power until you (or your kid) has the steering wheel straight.

I know thats a little challenging in a lo206 where you’re probably mostly full throttle. If its full throttle then smoothness is the key, you begin to throw the kart around you’ll kick it up onto two wheel.

So to close out the weekend but welcome further comment…

First 2 sessions into Friday practice had 1 Senior and another Cadet upside down. Bicycling all over the place. I will look for a recent satellite pic but there are a series of thick, sticky patches in some corners which need special attention.

Even into finals on Sunday there was debate amongst mechanics: kids who were .3 faster in their fastest laps were also up on 2 wheels and ruining laps just as often.

Thanks for the advice and welcome more!

Message me privaty with hints for Flamboro…never been there and thats next! 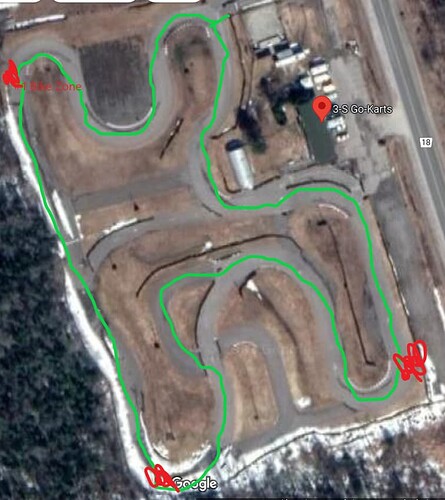