Meh. It’s harmless enough and it hopefully makes them some $. I like the idea of pro models though I’d prefer that they were different chassis that represent their take on what “works”.

That being said I’d buy a Carlton over a Lando since Carlton is a kart guy and doesn’t have an income from f1. I love Lando and think his graphics are cool but I’d rather support a brand that is doing more than cashing in on a lateral marketing oppty.

F1 driver-branded or not, I think it’s exhausting for kart companies (looking at you OTK) to have so many line extensions that are all functionally identical. Not a bad strategy from a business standpoint though, as I see that as a contributing factor to why OTK has become such a dominant force in the US.

Not only in the us… rotax europe is all over OTK…

I know business is business, but from a sporting entity point of view, I just think it’s all a bit lame.

it gives an illusion of ‘giving back’ to karting while not really doing anythng. Wheldon and Schumacher (Michael that is. Obv we have the RS) are both guys who I thought were the real deal, and they never felt the need to put a sticker kit on a kart. They just got out there and raced.

I guess from an analysis perspective it’s interesting how the LH kart never got any traction at all. Might have been better if it wasn’t a CRG which was the most in vogue chassis at the time.

It’s not so active a way of “giving back”, but no doubt Lando exposing his massive fan base of probably mostly young pups to karting is a passive win for karting.

Though I know some of you guys here hate the “karting is a stepping stone to F1” troupe. It’s the reality though.

There’s not a huge amount of growth there, and actually represents a risk to the sport as we move into the eSports era

The number of posts I see on reddit or facebook that start with “I’m 18-70, am I too old to start karting?”

Problem Fixed. But maybe not the way we were hoping. But then they decide after getting their IR to 1500 to buy a kart and get gud IRL.

It is just a Tony Kart with another paint job.

Honestly, I think it is just marketing BS. Their are way to many Brands and categories in karting anyway so all this extra brands from F1 drivers is just more confusing.

If all those brands like Leclerc, Alonso, Zanardi, Norris, Kubica were dropped, the amount of classic brands were better displayed.

He could better invest money in a team which just uses Tony Karts, but sponsored by Lando Norris or Quadrant.

He could better invest money in a team which just uses Tony Karts, but sponsored by Lando Norris or Quadrant.

To be fair to him, Super GT is sponsored by Quadrant with his karting. 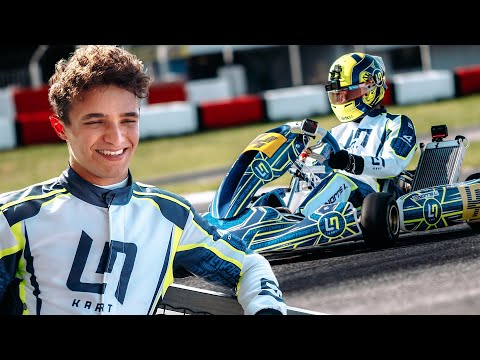 Can’t tell me this kind of thing isn’t good for the sport.

Last week we were all talking about how cool it was that Riccardo was racing his branded Kart against Marijn Kremes Birel.

I kind of understand why F1 guys make a specialist kart of their own, imagine adding a full testing program in another sport on top of an F1 career.
And they would want it to be the a winning Kart too. Safe bet is to go with a proven manufacturer that has a pretty good chance of winning and doesn’t take much effort.
I was fairly sure some of the F1 branded guys do have different hubs etc, but if they end up being better then the manufacturers equipment, guess where it ends up and what branding goes on it.

I mean more people will watch a Lando-vlog about karting, compared to all of the other karters that aren’t vlogging about karting in 2021.

Sounds like a win to me. Take the passive win where you can get it, rather than wanting it to be perfect.

I will and for the reasons I’ve already stated.

F1’s association with karting has been very negative. It’s been the prime driver of increasing costs and it has made it incredibly difficult to promote karting to anyone over the age of 16. This just furthers that perception. Not all publicity is good publicity if its re-enforcing negative stereotypes (or what I perceive as negative anyway).

I know I am fighting a losing battle on this one, but I’ve spent so long promoting karting and this kind of thing has always added another psychological hurdle to overcome in getting people to get involved. For example, sim racing culture was not born from F1. It was born from ordinary people most people could relate to (Jimmy Broadbent etc…). It was the same way karting starting and flourished. 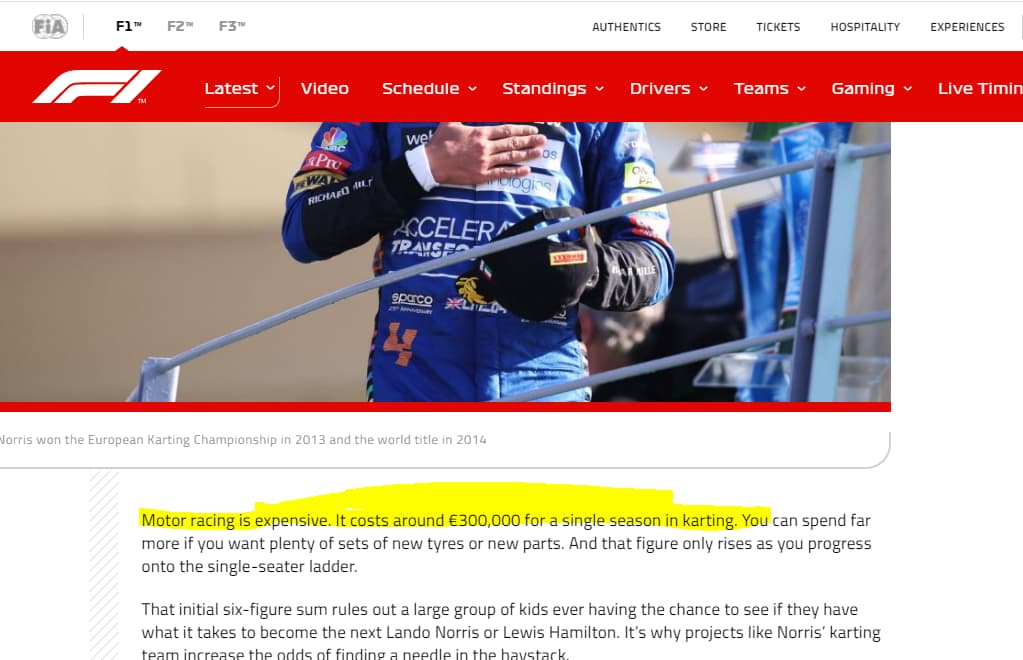 This is what I mean by subtle psychological hurdles these types of things actually create. Doesn’t help it hinders.

Well, you want to drive in OKJ/OK, National/Euro/World FIA championships with the WSK and various trophies (Margutti, Winter Cup) with a factory team, you can go a lot over 200k. Even privateers are getting super expensive.
Good thing that a lot of (ex-)F1 drivers are working to change that (Alonso, Rosberg, Montoya etc)

At World Championship level it’s not like those numbers are fake. Which is specifically the level that F1 and Lando are thinking of when they are thinking of karting. We all have a number in our head on what it costs to run a season based on our experience and what we are looking to race and accomplish.

I fully understand that the sport is filled young kids who think they are going to F1, and that the senior ranks end up thinning out (or get reduced to 14-year olds) as people leave the sport.

It seems exclusionary and prejudiced to tell certain groups of people we don’t want them in the sport because their aspirations are different than our own.

It seems exclusionary and prejudiced to tell certain groups of people we don’t want them in the sport because their aspirations are different than our own.

It’s not the type of people I have a problem with, it’s the type of promotion and involvement that I am prejudiced against. I never had issue with Wheldon and Schumacher. Both of the highest profile drivers in Europe and America at the time of their involvement in karting. It was immediately obvious those two were in a different league with the way they interacted with the sport. In my view a more ‘healthy for karting’ way to be involved.

Regarding the article, ‘we’ as educated karters know the 300,000 figure is a very specific section of the sport. 99.99% of readers won’t know that that section makes up about just 0.01% of the sport.

This is what I mean. F1 has appropriated karting in that sense that anything related to the term karting is automatically associated with ‘F1 ladder’ style karters. Senior direct drive karting at FIA level has all but been decimated completely. We’ve seen a wholesale evisceration of actual senior drivers in the premier class and now is in almost complete subservience to F1.

So people say karting costs 250,000 a year. That’s clearly a nonsense statement, but will go unchallenged. I doubt there’s one person on this forum who spends much more than a 10th of that per year but F1 wants to ‘own’ karting. I mean that almost literally.

This is why I don’t think this is ‘positive’ karting promotion. it creates hurdles from a promotional standpoint. It doesn’t reduce them. Having to even consider say “karting isn’t just for kids” make me want to puke ha

(I know I am fighting a losing battle)

That’s euro series like Tanguy was doing. Championship with teams and stuff. I was watching Lando video and he said something to the effect of, it’s important to understand that motorsports are really expensive and unfortunately, not everyone who wants to race will be able to.

Thought it interesting he brought it up.

Could it be @Alan_Dove, that folks are kind of lazy? That they want their drivers pre-sorted financially?

The euro system that Tanguy describes which costs several hundred K is a deliberate system euros put in place. It’s the only clear path to F1 that I can see. Sure you go from there to Formula3,2 etc, if you can afford it.

It’s super expensive by design. Intentional it seems. Weeds out the folks who don’t have or can’t get backing. Maybe it takes the onus off the teams to have rich, already sponsored drivers.

May the most talented of the rich kids win, I guess. But then an even richer kid can just buy a team, get a seat, and learn as they go.

It is not intentional, it is just that rich people are getting richer. Back when I was racing, people would spend 80k to 100k for the same thing. But now they go on training days and they switch 3-4 times of chassis per days, build engines all the time. They don’t care about being efficient with their money anymore, and the teams take advantage of that.

At World Championship level it’s not like those numbers are fake. Which is specifically the level that F1 and Lando are thinking of when they are thinking of karting. We all have a number in our head on what it costs to run a season based on our experience and what we are looking to race and accomplish.

What audience is he speaking to, or what audience is receiving his message? If it’s those who are familiar with this tier of karting, &/or perhaps aspire to that level of the competition, then probably no “harm” done. But there’s no qualifier in what he said (ie. It costs 6 figures to compete at this level), so, to the uninitiated, who may not necessarily know about club level racing, it potentially gives the impression that karts are uber expensive.