Wondering if anyone has done a comparison between various bodyworks and associated bars to find the lightest setup. Obviously this could be useful for a larger driver trying to make weight, or even someone trying to be able to place weight in a better location. KG obviously makes several bodywork iterations, not to mention all the various bodywork from other manufacturers. I have not been able to do this kind of comparison, but am curious.

I would imagine that older stuff is lighter, as usually it’s thinner. I remember back in the late 00s, some guys were still running breadbox body work with no decal kit to make weight.

Never have weighed them. However, I do know several manufacturers offer titanium bars and fasteners for bodywork. While pricey, this is a way to reduce weight, if your series allows it.

Came across this tonight. Says it is 3 pounds lighter than the FP7. https://italianmotorsusa.com/collections/bodywork-kits/products/senior-bodywork-set-black

That looks like the bodywork used in compkart I drive. It is smaller. I had to replace nose bumper this weekend and all we had was one of the new ones and they are pretty huge. I like the older ones.

Reviving this thread! Has anyone used bodywork to drop weight? Can you tell me what weighs what?

I’m inspired by Steve Brown on YouTube who revealed he saved 2kg (not in the video below) after putting Parolin Dynamica bodywork on his senior OTK EOS, I am curious if anyone can verify that. 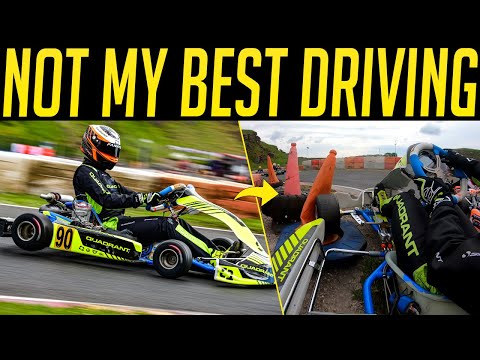 Do you know the exact weight of any pieces?

I know a couple years ago we found out the Parolin Agile bodywork (and nerfs) was 7 or 8lbs lighter than the righetti ridolfi XTR20 bodywork. Some of the homologation sheets have the weight on them, but not all it seems.

Depending on the rules you need to adhere to, the older bodywork tends to be lighter.

In the late 2000s, a couple heavier drivers would run CIK “breadbox” bodywork as opposed to the Freeline stuff they were using to save weight.

Reviving this topic a bit now that we have new bodywork homologations. It’s very curious when it comes to the homologations which body pieces are listed with weights and which ones are not. For example the KG nose and side pods both are listed with weights, but the fairings are not. The new 507 nose and side pods are a combined ~1.6lbs lighter than the previous gen 506. I assume the new 507, and definitely the 508 driver fairings (nassau) are heavier compared to the smaller 506 fairing, but curious if anyone has weighed them? I know bodywork weight isn’t a big deal to everyone, but for people (like me) trying to shave weight off their kart where they can it’s one more route to go down.

So I know that the new otk m10 side pods are 1.86 lbs lighter than the previous generation

Also the dynamica driver fairing is approximately 3 lbs lighter than the hotdog. I should start weighing all this stuff. and make a thread for people to input.

Yeah it’s just weird to me that the homologation sheets for all the side pods and noses have weights in grams, but none of the Nassau panels seem to have that listed.

All are fitted with OTK decals.

Interestingly, OTK’s 2022 chassis features new side pods and a nosecone it’s claimed will be lighter than the M6 versions

i haven’t confirmed this for myself.

Just drop the kids off at the pool before you race, you’ll be fine . . .