So I was watching the Monte WRC coverage and a thought popped into my head.

In the summer it’s bloody hot (at least here in the South). Nobody really wants to run when it’s 95+ degrees out in the sun, I sure don’t. So why not just put some LED headlights on the karts and run them around the track at night instead? It wouldn’t take much of a setup to do so for a kart.

It’s cooler for the drivers and spectators. It would add “flash” and be interesting to watch. No glowing brake rotors - but still… Plus it’s at a time when people who normally do things during the weekend days would be free to watch…

It wouldn’t take much of a setup to do so for a kart.

I think it would take more effort to get set up than most people want to spend on something like that. Having the track illuminated with flood lights is a much better option. It makes it more even amongst competitors all having to deal with the same lighting conditions without having to change/add anything extra to the kart.

I love that you’re thinking about how to get more people to the track to expose karting to new people. But, if they’re not coming during the day, I’m not sure running at night is the best way to attract new people. Years ago when Skusa raced at Modesto, it ran super late into the night. For someone like me who knew karting, I could tell who was on track and all that. For my wife and my buddy, they were kind of lost with what was going on. Same for when I did a local night race last year and had family in the area come check it out. They thought it was cool, but had a harder time following it at night. And I think it would be even harder if each kart had bright LED headlights instead of the track being lit from above via flood lights.

Don’t get me wrong, I think night racing is a lot of fun and certainly a whole different experience. And during the summer, it’s a great way to avoid the heat of the day. But floodlighting is still probably the best method.

Our club runs 3 night races a year. They have some built in lighting and bring in extra lighting for certain sections of the track. It’s good fun.

I think night racing is definitely a competitor-convenient thought, however a bit difficult to execute.

On the east coast, I know of a few rental tracks that try the headlamp option. Most recent I know of is Summit Point Kart - Capital.

On the west coast, Adams Motorsports Park hosted some night races in 2018. But that’s an example of track lighting helping us out. 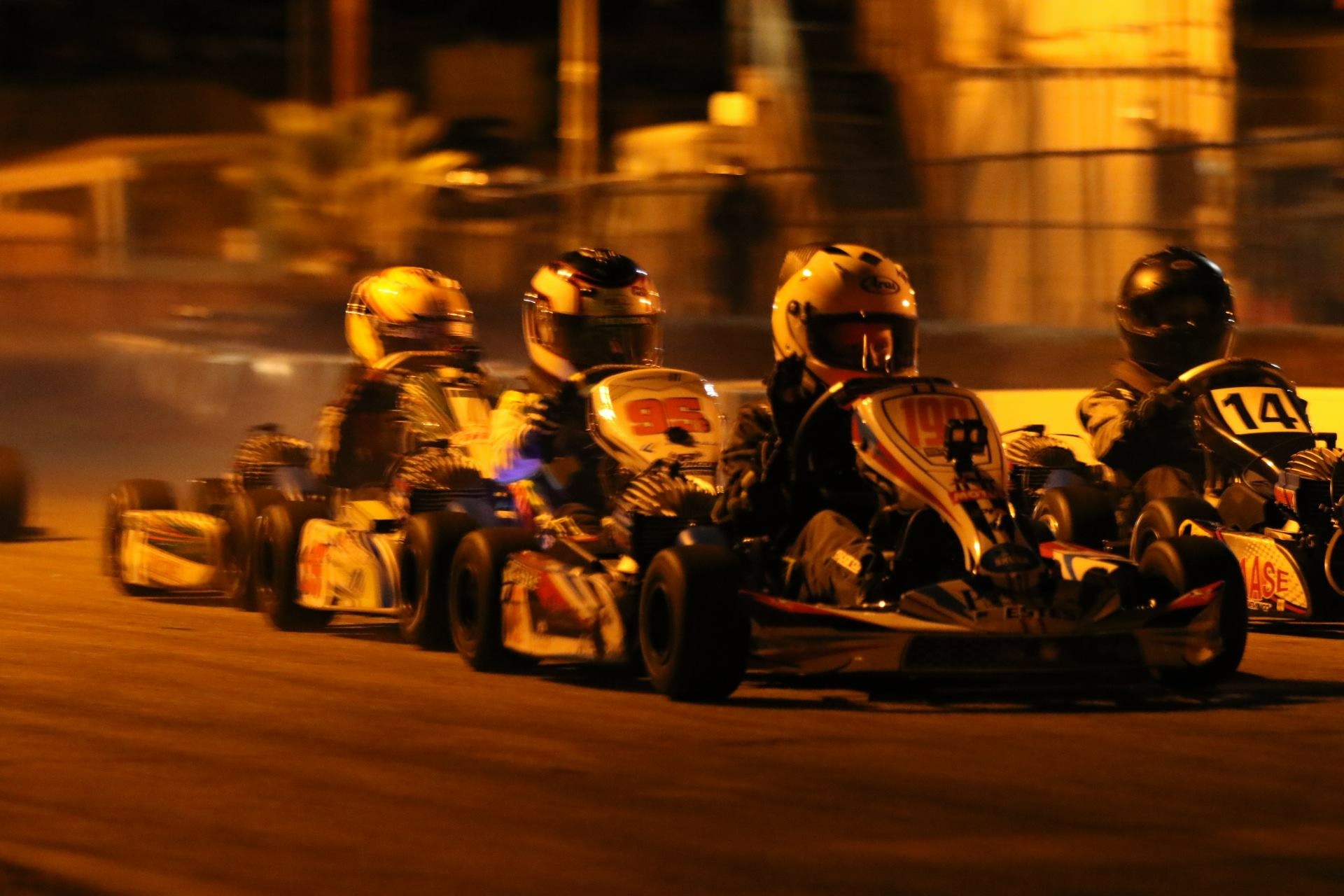 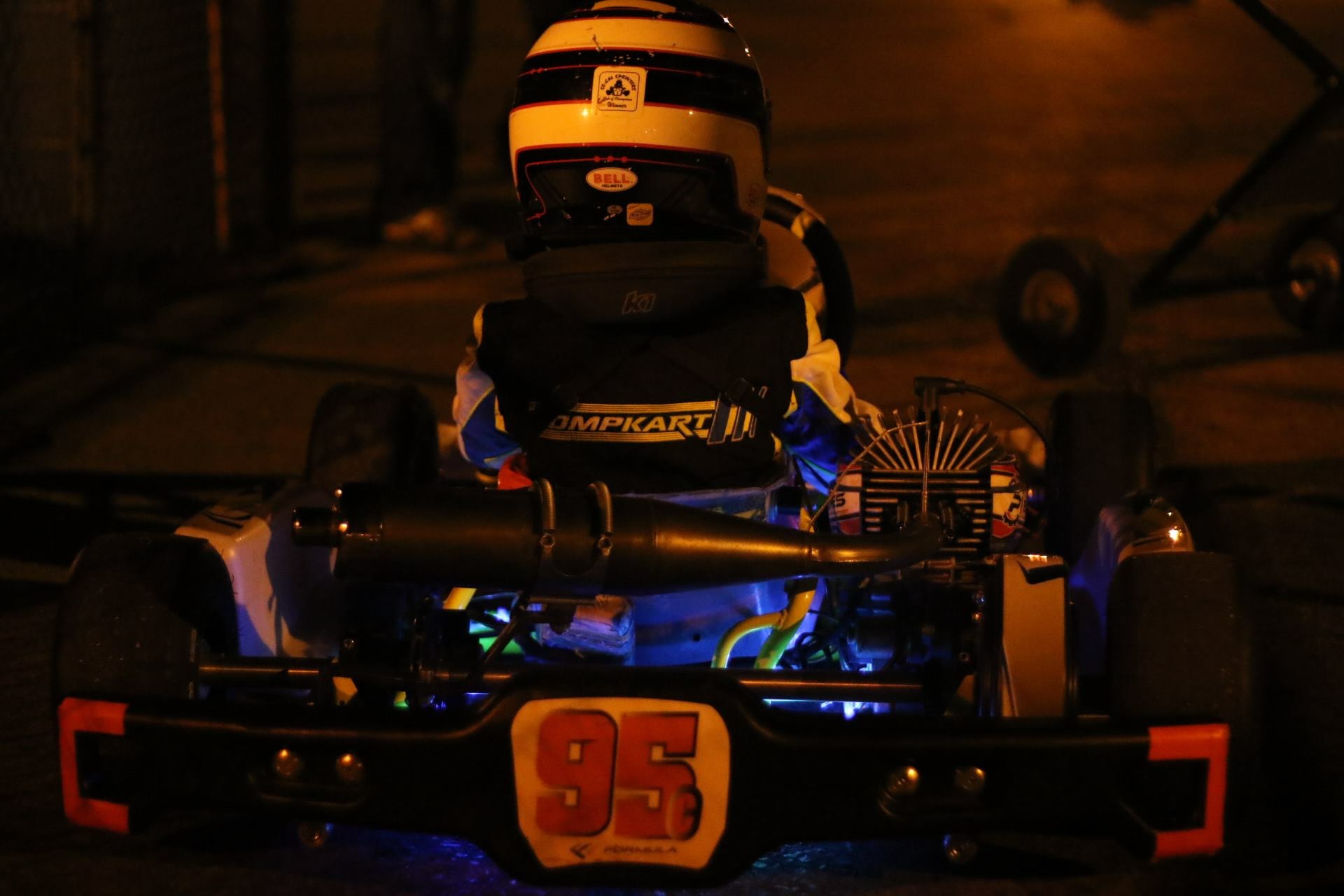 I think the best way to go about track lighting is with a street light approach much like Adam’s but more so. Especially near each corner. In Adam’s case it was just barely enough imo as a driver. Made for a great light show with different color MyChrons and some drivers adding underglow strips though!

From what I’ve heard from SPK, it was hit or miss with headlamps depending on driver preference.

I’d say for tracks without lighting infrastructure, possibly renting mobile light carts would be an option depending on financial support (most likely most expensive route). Floodlights on stands would be a good option too. Just need to worry bout routing chords and generators and fuel.

From a spectators point of view, summer is going to be a struggle day or night. The heat stunts interest growth for sure. If there’s a way to clearly identify drivers (color LEDs?) maybe that could help family and friends follow along.

Lastly time of day and length. What do kids want to do on a Saturday night on a summer off from school? What do parents prefer to do after a long work week and possible soccer games for other kids?

It’s a challenge all around but I think the heat is a legitimate concern for summer racing. So how can we make it happen so that we keep entries up and spectators interested?

IMO you kinda have to have flood lights so that you can see beyond the track. If you think of a kart going off and separating from the driver… in a case of lights on the kart you can have the kart in one spot, driver in another and you’re trying to find them in the dark.

Back in the late '80s and early '90s we ran at a little 1/3rd mile dirt oval in Blountstown, FL. From May through October we ran at night. November through April we ran in the warmer daylight.
Some of my favorite memories of those night races in the Spring and Autumn are of watching the steam rise off the track and the tires, the cool night air and the smell of castrol and racing fuel. It was truly magic. That track is now gone. Too bad.
Now, at Monticello Karting, a beautiful, paved road course, we only have day races.
I think it would be fun to run at night again.

Craig,
Is that the Monticello near manhattan?

No, Dom, Monticello, Florida.
Up in the arm pit of the state. Also called the Big Bend of Florida. We are only about 20 miles from the Florida-Georgia line.
Today we are out in short sleeves and very comfortable.

Ah, there’s a Monticello car club in my neck of the woods. Enjoy the warm weather!