I was recently confused about this too. The internet gives conflicting answers. Went to my club shop and asked and they use Castrol 10w30 for break in and then 4t (or amsoil dominator here in Canada) on all their team engines.

When we started out, if we asked the same question to three people at the track, we’d get three different answers. Maybe one of them was right. With the internet, it’s much the same way.
If you have questions on an engine, call or visit an engine builder. Save yourself some time and headaches.

If you have questions on an engine, call or visit an engine builder

I like this idea especially. Every one of the methods listed have worked for people I guess, so it’s more of a nuance. So, pick an engine builder that you’d like to work with for your periodic top end work etc, see what they recommend and run with that for consistency. Personally I think the consistency is more important than the specifics of what you do.

As Dave Klaus once said “Don’t over complicate it”

Thank you guys! Yes I will go talk to an engine builder and see what they say. I am not sure if I am right. But non-synthetic oil forms a less protective oil film and wears the engine more quickly than the synthetic ones right? If that’s the case, why do some people still use non-synthetic oil for break-in?

I am not sure if I am right. But non-synthetic oil forms a less protective oil film and wears the engine more quickly than the synthetic ones right?

Not necessarily. Years ago I raced shifters. The national level builder recommended castor oil. Apparently it did better in scraping protection and other ways. The negative is it is dirty, resulting in more carbon build up. It also came out of solution easy. When racing TaG I moved back down to synthetic because it was good enough that I did not need to live with the negatives.

Here is a video that will help you understand so I don’t have to type it all out for you. It’s all got to the viscosity.
Which mean the hotter you engine runs the heavier the oil you need. Never change oils. Always keep the same kind at all times. Never switch.

The reason for non synthetic on breakin is to speed up the seating of the rings. How much of a difference it actually makes I don’t know.

its important to note that a four stroke OHV engine is a lot different to what’s in a car. The oil is a splash feed, so ideally the oil needs different anti foaming properties. Also, air cooled engines see very high localized temperatures compared to a watercooled motor.

For these reasons it’s best to stick with something specific like the amsoil 4t. This should not be confused with the PAG based oils which absorb moisture and need to be changed super often. Arguably they sacrifice longevity for a small power gain. That’s fine for an engine that gets teared down all the time (eg clones) but kinda defeats the purpose of your 206.

Castor oil is a different story all together of course as it’s used in a two stroke but never in a four. It’s based on castor beans vs petro chemicals. You can’t really compare the two. Although you could run it for fun I guess.

When castor oil gets (very) hot, it breaks down into a smooth ash, a dry lube of sorts. This gives a little added protection when you’re running on the edge temps wise. leaded fuel helps in this way as well, except that the deposit is always there.

Here’s a video from Briggs.

Here to also is a good video that really goes in depth. Of karting oil.

Thanks a lot guys! And sorry for the late response.

My break in went well and everything with my engine has been running great. I went out and purchased some labeled squeeze bottles so I get the proportions right. And I take them with me as a grab and go when traveling. A pack of 6 was like $10 on Amazon.

The non-ethanol is for my vintage 1940’s Jeep projects when they’re cold blooded and I need to prime the fuel system. 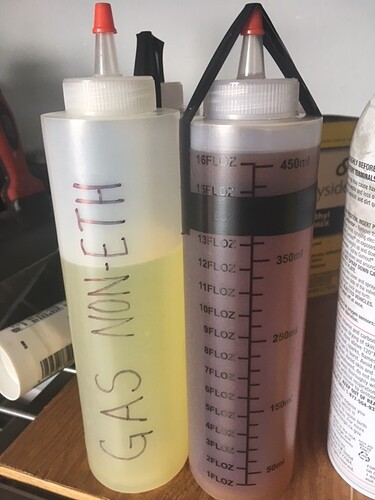 I would say that any 0w20 passenger car synthetic oil meeting API SN would be suitable for racing, but if you have a local Amsoil dealer it’s easy to get the Briggs 4t.

Run AMSOIL SAE30 Break in Oil. Then I run the hottest legal oil possible and a good OTC oil to fill that need would be the COMET Racing oil but it makes everything blue but its pretty good at making power. 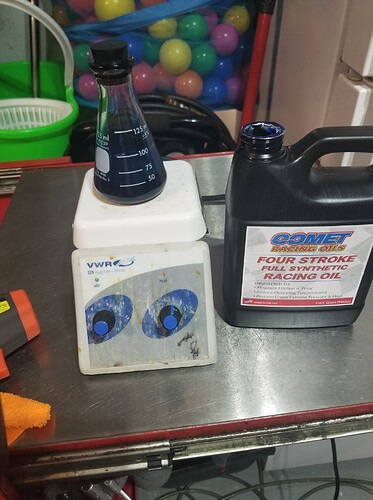 Then I run the hottest legal oil possible

All sorts of things can make an oil hot. Unlike fuel, oil is often overlooked in the tech process and since there is no standardization like a spec fuel for example its much harder to police. The oil can contain simple things like Benzene, MTBE, Nitropropane 1 or 2, Nitromethane 4:1 Dioxin or others in the name of giving an advantage during combustion. Also, if your crazy enough things like a mixture of NitroMethane and Hydrazine Pretty much many of the same players you will find in fuel. The biggest thing though is many will be found during sniff test/burn test of oil outlined in many tech procedures for different organizations.

Ok you meant what I thought you did. I’d rather we didn’t recommend that to our innocent 206 racers though

Noteworthy that Tillotson have a spec oil that’s dyed for their 212 engine.

Some organizations don’t outline any type of oil restrictions, I think they should make oil a spec item myself.

@IRQVET how did you backflush the engine? Thanks.

Just used an extra quart of oil, but the engine at a slight decline, poured it in with the oil plug off. It was crazy what can out of there, I was very happy I took that extra step.