Can anyone tell me please whether I can log heart rate with my mychron 4?

It’s probably more involved than it’s worth. You’d need to engineer a system for it.

I used a Garmin GPS watch a long time ago to log HR.

Maybe get a Fitbit or one of the other heart rate loggers; probably a lot easier and cheaper. I know you can’t import it into racestudio, but it’s easy enough to pull up two screens. What are you trying to accomplish?

Last year I used a garmin watch. There’s a heat rate monitoring feature that gives a cool graph of what your hr was throughout the day. Sorta cool to know but wasn’t able to pull data other than iPhone screen shots.

I am kind of curious as to what exactly are you going for. Is it peak HR or just a correlation to turns. The one thing that would be interesting (to me) is HR rate due to physical loads or activity vs mental stress. Say traffic, defending, passing.

The garmin shows your hr graphically with peak and low. It’s kind of neat. So in my case my absolute hardest is 180bpm. What’s interesting is how quickly it gets up to max and how it pretty much stays there until you let off the gas.

I have a trace of GPS+HR from 2011 from my garmin 305. I think the peak was 196 or something crazy. Knowing me I was probably tachy from a lack of hydration.

Yah that 180 was on a brutally hot day. It’s wierd how getting too much sun causes elevated heart rate.

Heat stress is no joke. A buddy of mine passed out at the wheel of a 250 twin once. full leathers and it was a 40ish degrees anbient, so much hotter than that on track despite the 200kph of wind. He left the end of the main straight and crossed a sand trap and ended up (gently) again a wall, unconscious.

Mike suggests below heartrate v. corners. That’d be an interesting exercise I think, which Mychrons race studio is built for. 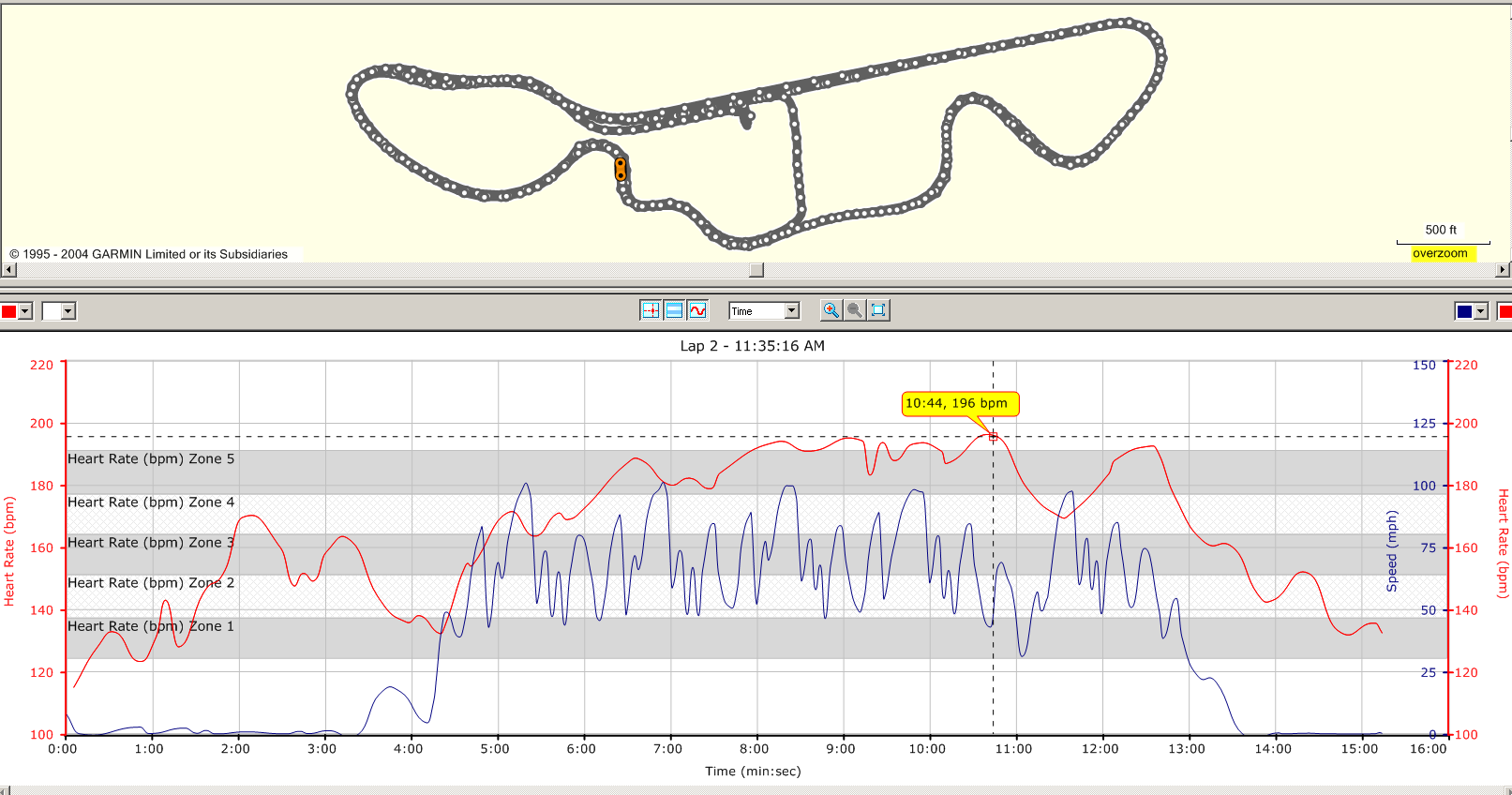 Mine from a practice session at Grattan Raceway, 2011. Shows location\speed prior to, during and after a practice session, so it’s a series of laps mapped on top of each other, I think the frequency was every 5 seconds.

Peak HR of 196 coming into “the bowl”. A banked turn on the back of the track at the end of a right, left, right sequence. It’s a pretty intense corner.

lowest HR while driving: Seems to be entering T1 around 95-100MPH. (Wrong gearing, I think it should have been 105 without a draft)

I don’t think you can get data IN to race studio via CSV, but you can get a CSV out of it. You could use race render to overlay HR with video and other gauges… But of course you need both video and data from the same session… something I never managed to pull off. I think I had to do some conversion with the garmin file to CSV as well.

Here’s a video of the track. It doesn’t to this place justice, it’s like a rollercoaster.

So I watched qualitying for the F1 season opener, which was fabulous. And then I streamed this to a 65 inch Tv, which was orgasmic.

The elevation, the camber, the gnarly surface and the flowing curves, at those speeds with a kart a metre in front: this is spectacular.

Turn 3 (?) to the left as the road falls away - you’re dropping into a compression, with camber. I can see how you attack the gas there. You had to get out of it every lap to not ram the dude you were dicing with. That’s just hilarious fun.

The shape of the track exactly matches the pace of the kart. And he hit you on the final corner?

James is that in race studio?

I should clarify, that’s not a video of me, I don’t think I have any of myself on YT at grattan. Lance Lane is the driver.

I’ll have to find out what he used for it.

They will and do… But not by themselves of course. The run up to the first turn is uphill, so that knocks a little off.

I’ve seen 119 on GPS at gateway motorsport park. But it took three of us working together to get there.

I think VMax by self is 105-108 with CIK bodytwork. Depends on the model of bodywork, wind direction, how much your shoulders stick out things like that

I’m diverging off topic here, but drafting in a pack in triple digits, trying to play chess is a LOT of fun. The mentality is different to cutthroat sprint racing though. 25 min race, plan your moves, be very aware of the position of the other karts and generally don’t be a dumbass.

James:
Is that footage KZ2?

Yeah I think he has a Modena on there.

i think i’m going to log heart rate this year, i have a wahoo kickr monitor which goes around your chest. I haven’t quite worked out where i’m going to put my phone to log it; but that shouldn’t be too hard.

I have struggled with some nausea and fatigue after races and i don’t know if i’m pushing myself too hard, getting a bit of motion sickness or both.