Look what I did today, Engine FUBAR

Engine siezed, axle locked and I spun into the barrier. Little sore but all good. Wanted to share as everyone at the track was astounded at what a number I did on the engine. 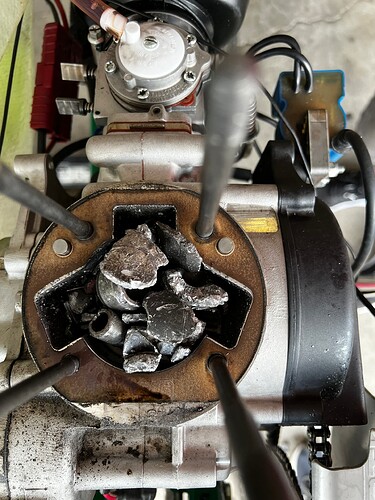 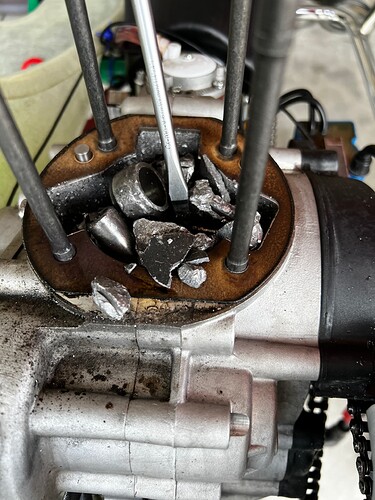 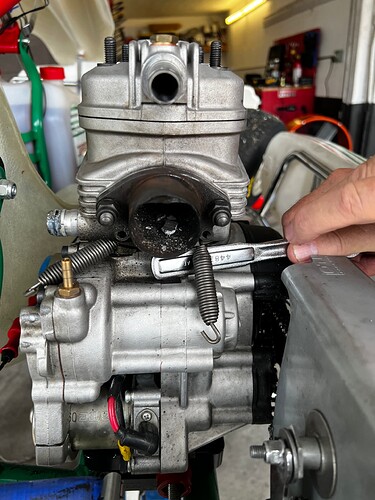 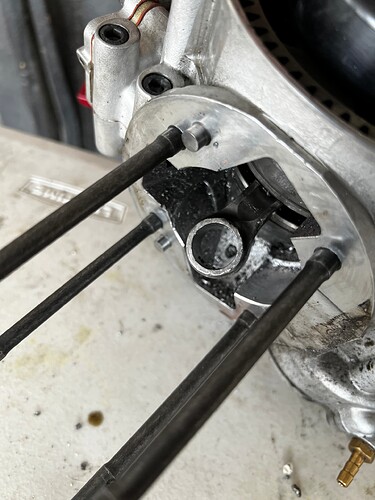 Yeah looks like your piston shattered. Any idea how much time on top and bottom end?

This can happen from too much time on the piston, or the bottom end loosening up and allowing the piston to hit the head

It’s pretty much a brand new engine, has less than 4 hours. When I got back the spark plug was loose, the electrode was smashed and the end of the plug (part that seats into the coil) was charred. Don’t know if it became loose when it seized or if it got loose and sucked air in, either way it was likely running way too lean.

Edit: it was weird because egt temps were a little high but nothing unusual

Second part of the edit didn’t save. Engine wasn’t running right towards the end before it siezed, when it came back the spark plug was mangled, loose and really charred. Don’t know if it came loose when it siezed or not. Either way it was running way too lean when I took it apart

Yikes, that is brutal. Dumb question maybe; did you accidentally put un-mixed gas in?

No, not a dumb question at all. Gas was mixed but I did it the lazy mans way (1 liter of oil into 5 gal of gas) which I was a normally did. I know you should measure the gas and oil exactly with a measuring cup, which is what I’m going to do from now on, not taking anymore chances. Makes sense to just do it right the first time. Shouldn’t have been so lazy in the first place.

I mix new 1L oil containers in with 5 gallons of gas all the time and have never pulverized any pistons. Crazy that your engine had that happen, but I doubt that was your issue.

That was my thought. If anything going by the manual states a 4% mix of oil per 1000 cc of gas which would be 760 cc total But pouring in 1 liter is 1000cc per 5 gal which would be more lubrication, in which a seizure wouldn’t really make sense since it has more than enough oil. I know you can obviously add too much but adding 240 cc more surely couldn’t cause that.

All jokes aside, there’s always some learning. If 4% is what the engine required, too much oil won’t do anything other than fouling plug and creating more deposits.

What do you think is the issue? Lean jetting or air ingestion from somewhere? How are the main bearings and seals? They are usually the best spot to start diagnosing these type of failures

If you usually run 760ml vs 1L then your jetting would be slightly leaner with 1L if everything else stays the same.

I doubt you seized it though in the traditional sense where the piston seizes on the bore. With the plug coming loose I think the piston was hitting the head for a while.

Also exactly what I do.

Thanks for the fuel/oil mixture input guys.

Andy, I think personally that for whatever reason it got too lean. like I said earlier, the engine was running a little off before the seizure and the temps were a little high at 1250 max egt, something I hadn’t ever gotten too before. I quickly realized it and richened it by about 10 min on high and 5 on low jet, it brought it down about 50 degrees and I left it there, didn’t adjust after that as it blew a few laps later. A good friend thought it might have been one of the bearings, I haven’t fully disassembled the engine as I was focused on putting a new one on today and getting it started. Planning on doing a in depth analysis this week to see what happened to it.

I have grenaded 2 motors in my time karting, both Yamahas. In each case the spark plug became loose. One was my fault, I know I failed to tighten the plug, the other I have no idea how it happened. So when you noted the spark plug was loose I wonder if that was the case. Either way that sucks for you.

I would call IAME. 20 charac

Can’t stop thinking about what David Hobbs what have to say about this…KABLAMMO!

That’s an impressive failure for sure.

Yes honestly I think that while it was lean, I was running the same tune the x30 app was telling me to do. I hate to put blame on IAME, and I’m not trying to be crude or quick to judge but think part of it was a manufacturing error. As based on people I’ve talked to, a couple said that that was a lot of damage for to be caused by running lean. I know there are billions of variables, but the only thing that I thought I could have messed up on aside from me possibly running it too lean could be the plug. I replaced it a couple days before but know I tightened it and I was with a friend who also acknowledged I tightened it, unfortunately the human brain, while brilliant can be very unreliable so I may well have not tightened it BUT I did at least 80+ laps on that same setup and plug until it failed. Again it completely could have been my fault/caused by something I did that I didn’t think of but after thinking about everything I did I couldn’t see anything I did wrong.

To just poke at the manufacturer error point, the engine was pretty much brand new, bought it about a year ago and only put 4 hours on it as I was really busy and then got sick. I know tolerances are extremely tight but no matter how many times you check things there can be failures and I accept that 100%. However with things the way they have been in the world it’s the only reason I’m considering manufacturer error to this extent .

Sahib, There’s nothing lost in trying to get IAME to foot the bill, it might be their problem. Just tell them the story, as you have here.