Welte Racing is a family team that got started in karting with Steve in 1959. We have had a pile of karts over the years. We have raced in the eras now known as vintage karting and classic karting and are still racing today, since we are old, what we call modern karting today in ovals and sprints.

We like building a lot of our own stuff, as well as restoration. Steve use to race a Blackhawk Mk XI back in the 1970s, that he later modified to drop weight in attempt to keep competitive with the more modern designs that were coming out. We had been looking for one of these for a few years to restore and thought we had a lead on his old kart which later dried up. We finally found one, that came out of Georgia and got delivered to us last year by a friend of ours from Ohio at the Rock Island Grand Prix.

The kart looked okay in the photos, but was an absolute mess in person. Bob Cole even gave us some good-natured ribbing, challenging us to follow through on restoration and to bring it back the next season to run in the vintage kart class. And so Steve set out to do just that. So, there is your introduction to what we consider one of the coolest karts ever made.

It may not be the fastest or lightest kart, but its unique, and probably shares more in common with a modern Midget Car or Sprint Car. We would also like to thank our good buddy Rick Magnuson that helped us a lot with the aluminum welding.

This is part 1 of our restoration of the Mk XI Blackhawk Sidewinder.

Love it. This is such a unique kart. Thanks for taking the time to share, keep us posted.

This kart has an incredible amount of heim joints in it and as a result alot of flex. The left side engine mount is just unusual.

Here is part 2 of the build:

Do you have any pics showing the Blackhawk in assembled glory. Something that shows how the heim joints were setup etc.

Here are a few photos from the restoration. When this kart was originally built it had a Blackhawk upholstered seat. My dad was the first to put a fiberglass bucket seat in it. The designer, Don Fairman, saw that and later did a better version of it. So, my dad put the fiberglass bucket in to get back to what he once had. You turn the wheel in this kart you literally feel the whole chassis move. 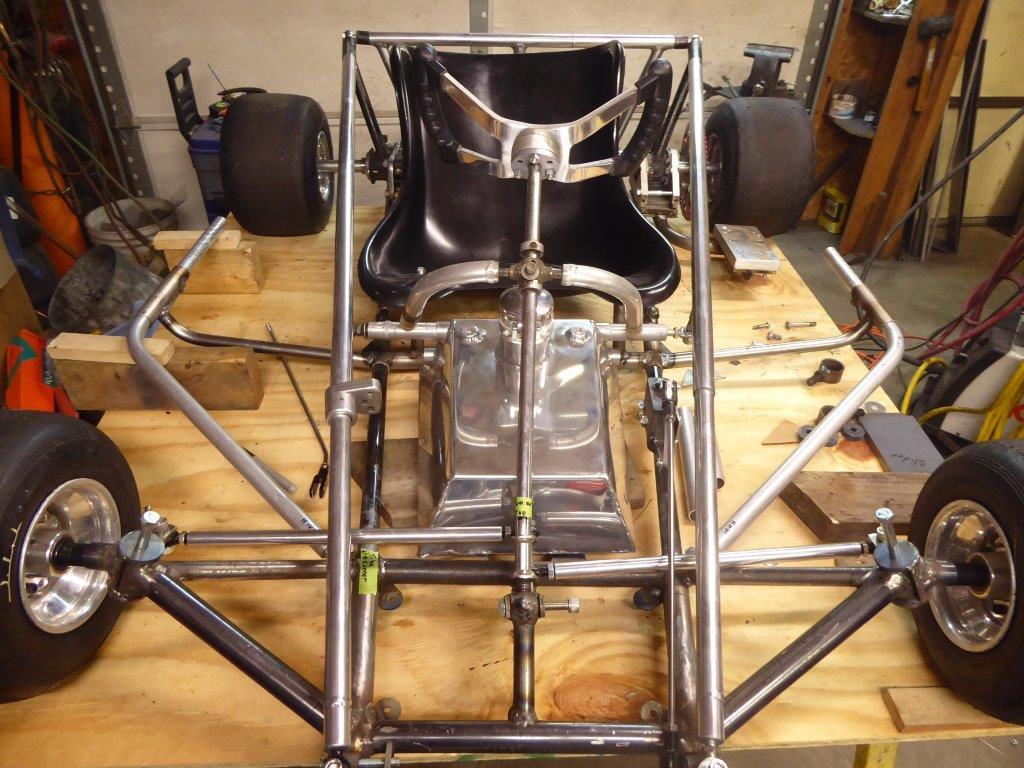 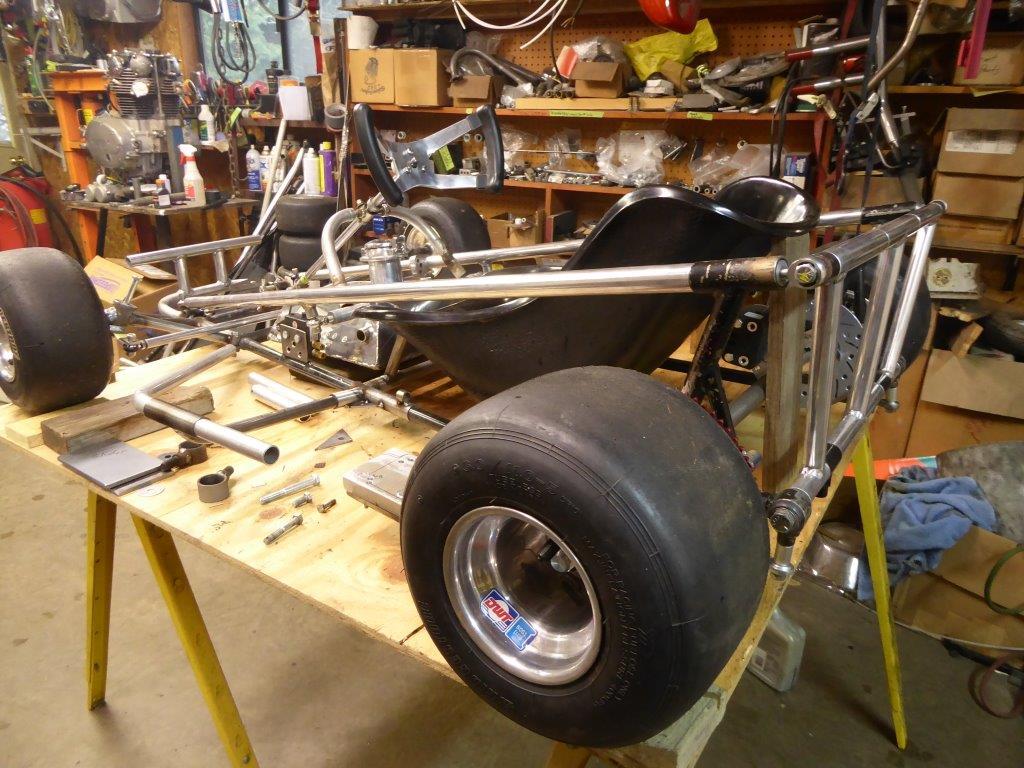 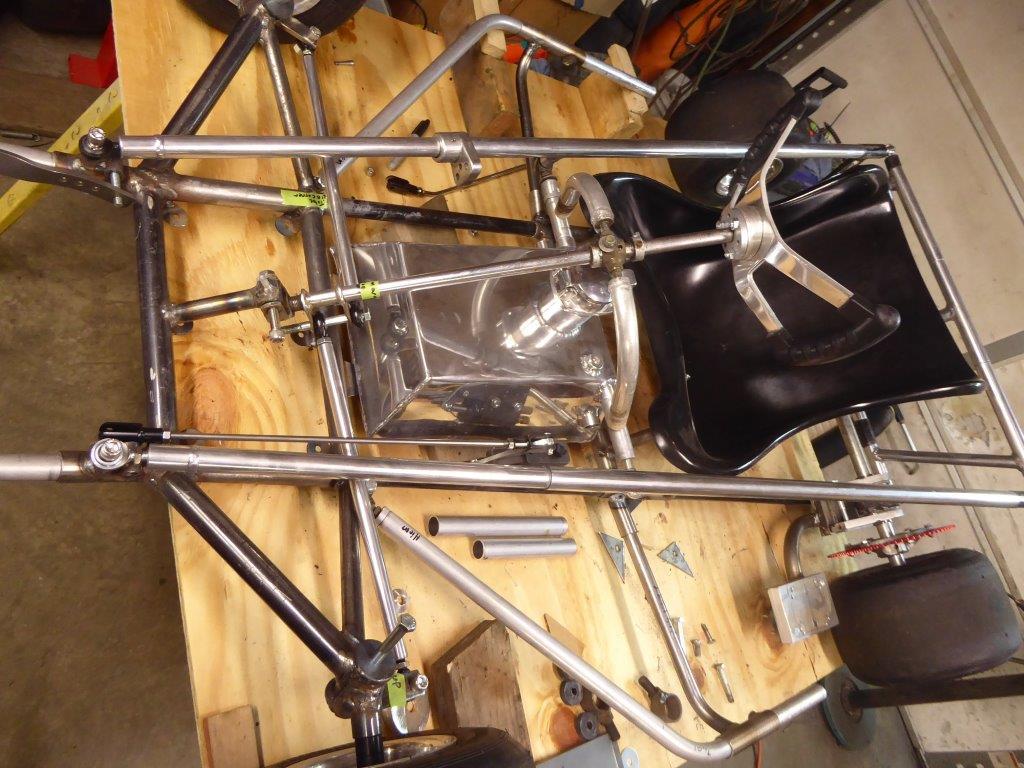 This is part 3 of the build. Lots of assembly going on here.

Part 4 of the build. Chassis is done. Looks very similar to what my dad, Steve, ran back in the day in the 70s without the traditional Blackhawk seat, which is getting shipped to someone else restoring an old Blackhawk that is missing the seat.

Next time we see this we will be putting the engine on and will be testing everything at the track, likely at the place that it was originally built at in Sugar River Raceway in Brodhead. It will be running in some Vintage Karting Association races.

Hats off to you for not only beautifully restoring this kart, but taking the time to document it so we can see and enjoy it as well. Love the videos and beautiful job thus far!

Thanks. When we first started doing this aspect of karting, we really didn’t think about video taping the builds and yea there are things that we don’t show, but afterwards we had so many vintage karters and a few modern karters as well that really enjoyed seeing what we were doing and how we did things, that we thought we should do a bit of it. Some of the things are not so hard to do, others yea its difficult or time consuming. You don’t always have to go to the manufacturer for a replacement part, maybe you do it yourself, maybe you just go to a local fabricator. Its like before I race my oval kart again, I need a new rear bumper, because its completely trashed. Well, that just means I’m going to build a replacement.

And see, this is why I like this stuff. For me I grew up in karting mid to late 90s, and while there was innovation, for the most part everything had already became somewhat standard. It’s neat to see some of the older karts restored to their glory to see the history of karting and where the sport came from.

And, I feel you, my oval kart needs a new rear bumper too hehehe

I love vintage karts. I’m super grateful you’ve taken the time to do these vids and I think more and more folks are going to tune in.

With vintage, each one is so unique and of course different to modern era karts. Karting can be so much more than just racing “modern” karts. Don’t get me wrong, racing is badass, but I think the sport will do better by broadening the pallate a little and going beyond just modern karts and just racing, and more about just general enthusiasm and interest in karts.

Thanks James, I think I speak for Steve, that we appreciate that. Vintage karting is also about mechanics. Many great mechanics from that era have returned. The horsepower wars these guys enter with modifying engines is just as big as any thing in the racing as well. The old mechanics are just as involved. There are numerous guys that wanted to knock us of in Mc49 of all things, spending so much time fine-tuning engine modifications to make more power as as well as make everyone scratch their head as to what they did to do it. There are few tracks and races that the 80cc super engines are running lap times the equivalent of the Sportsman Rear engine class which is generally 100cc Macs.

I think its a damn shame though when people do a restoration and you never see the kart hit the track. There are plenty of karts out there in some styles that it can be done. Now not saying if one finds something its like the last one on the planet that they need to put on the track. If there are bunch of out there, get out on the track and enjoy it, or find some one that is willing to drive it.

This is part of the reason when Jack Canady came up to me at 2016 VKA Delmar (held at 61 Kartway) to see if I would race his kart show award winning Go-Kart 800, I said yes. I know who Jack is, and some of what he has done, and it was a true honor to me that he had enough respect for what I’m able to do on the track to run his kart. He and Al are cool old guys that have a passion for this stuff. There were no historic class karts there but his kart. VKA was going to put it there on track by itself as a demonstration. And they are like, no, we came to race, they looked at me and are like are you willing to race it like it yours. I’m like heck yea. It was a cool experience and a real step back in time, the kart was cool, the engine omg the engine was a freaking awesome creation, the brake was the old drum style brake and did not allow me to drive the way I wanted to. And the smiles on their faces was incredible for me as well. That was the highlight of the vintage karting season for me. You know about my situation health wise, I’m really lucky to be doing what I’m doing, and they were just as thrilled seeing me wheel that kart as they were seeing that kart out there mixing up. And Jack was like I need to put a different brake on this thing.

Well it Runs! Steve finished plumbing up the fuel lines and brake lines, add a kill switch, mounted a freshly rebuilt West Bend 820. We remounted the seat today and scaled it. Boy it scales funny and probably needs a bit more nose weight. Dad never scaled his back in the day, so we have no idea what they originally scaled as. If the weather holds he may take it home, to where it was originally built, Sugar River Raceway. It’s probably been 40+ years since its been home, it’s time it returns.