Can you guys help? New in Mini. My son was in LO206 for 9 months before buying a chassis and upgrading to the Mini class. The engine is Woltjer and is fresh @ 2 hours. Other is a stock IAME and has similar results.

Why cant we obtain higher rpm’s?

15 min on the high is a HUGE swing on the Tillitson and likely too far. Woltjer scribed the baseline settings on the carb for you correct? Start there and make changes of 2min on one jet at a time.

Is your track shorter and tighter or longer and more sweeping? For faster and more sweeping tracks you’re pretty much where you’d want to be RPM wise unless Woltjer has updated his recommendations since I last spoke to him (possible). There’s also a very likely possibility that since your son is new to Mini and not making a full drive out of corners being later to the throttle combined with lifting early which would drive lower RPMs.

The stock settings are marked and approximately 1:30 Low and :29 High. I get feedback from low and can get it set around 780. The high going richer or leaner I cant get better than 1000 EGT. What I was trying to elaborate on was whether its 29 min or as low as about 18/20 min, the EGT’s dont go up, the kart just slows down and top speed decreases… Im not saying he is the next F1 driver, but when people creep up and pass him at the end of the straight and he is full gas, I feel like we should be pulling more RPM.

On a mini? I believe 14000ish is maximum. I think maybe the terminology is slightly different across the pond, just to be clear are we talking about the X30 water swift (cadet) engine? IAME went away from the term ‘mini’ which is used by Rotax (MiniMax) 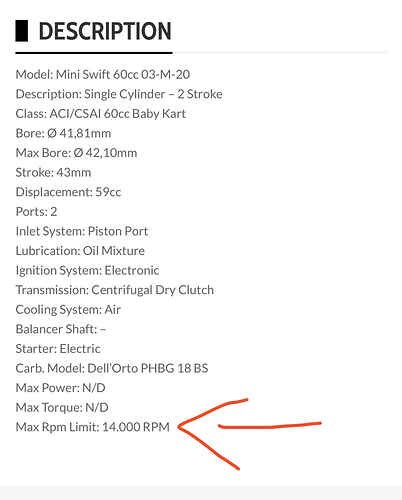 In the US the original air cooled 60cc Mini Swift is used, I didn’t even know they made a water cooled version until now.

Got it - checked the ole inter web, it tops out at 14k also.

Going from 206 to mini is a big jump. How many laps does he have/how many times have you been out with it? What size track?

Despite what the data sheet says, the Swift does not have a rev limit. We run them up to 16k if the track calls for that type of gearing.

At 10-76, 14k ish seems about right, especially for a new driver. As noted above, entry to the straight has a big influence on the top rpm. Don’t get too hung up on an absolute rpm number; it is all track dependent. Always gear for the low speed stuff, and the high rpm will be what it will be.

An egt of 950 to 1000f at 14k is right on the money. The baseline of 1:30 and :29 is pretty standard, and you shouldn’t need to waiver much from that. I normally never touch the low needle once it’s set on the dyno, and only make small adjustments to the high. The Swift is VERY sensitive to carb changes, and with a 15 min adjustment, I’m surprised it ran at all. If you keep going leaner, you will get to a point where you run out of fuel to combust, and your egts will actually start to drop. You will definitely see a big drop in performance. Always err on the rich side of tuning; Swifts run better slightly rich rather than too lean. Too lean, they fall flat on their face.