My thoughts on the Grands after this year

This is a bit late but I was out at the CKNA Grand Nationals last month, not racing but tuning for a driver, and I have to say they really stepped it up this year.

My previous complaints were mostly that there was very little on track officiating in years past, but this year we saw tons of penalties applied and I think it went a lot better than in the past. The racing standards cleaned up very quickly as a result, and the racing was much better.

I would almost go to the point that they were calling too many penalties now, but it wasn’t quite there. I think the officials were a little too aggressive with penalties when a driver tried to hold the outside when being passed, and subsequently got forced off the track when they didn’t have position in a corner, but the standards improved a lot and hopefully they’ll keep that trend going into next year. I would like to know what the experience was for anyone else here that ran or was at the Grands.

I wish our series would call stricter penalties and clean up our races. In some classes, I see almost half the karts driving around with their bumpers crushed in. I see several starts have incidents before the start, typically caused by karts weaving back and forth after the formation cone causing a gap and then trying to play catch-up. And other things as such that are “missed” during the races.

CKNA had a lot of backlash this year from some previous races. But I’m happy to see them learning and evolving to get better each time they host an event.

I do wish they would drop the price of the Grands, cause CKNA (normally) is a good value compared to SSKC!

I would almost go to the point that they were calling too many penalties now, but it wasn’t quite there. I think the officials were a little too aggressive with penalties when a driver tried to hold the outside when being passed, and subsequently got forced off the track when they didn’t have position in a corner, but the standards improved a lot and hopefully they’ll keep that trend going into next year. I would like to know what the experience was for anyone else here that ran or was at the Grands.

There is never a perfect amount of penalties at any race. Also, if a kart is forced off the track I firmly believe that it should be a penalty. Just because you have the inside position, does not allow you to impede the outside line and a kart width should be given

Cool to hear, Aaron. It is always weird to see positive feedback about series on the internet, but it is definitely a welcome surprise. Especially, since we were just discussing some of this previously. Thanks for sharing!

Also, if a kart is forced off the track I firmly believe that it should be a penalty. Just because you have the inside position, does not allow you to impede the outside line and a kart width should be given

While I completely understand this line of thinking, I think some racing etiquette discussions would disagree with you. I was taught at young age that if the inside kart has the corner, that means it is his option to take preferred (and complete) line on exit. It is the outside kart’s prerogative to risk trying to hang on the outside and hope the inside guy is feeling nice OR fall in line and try to pass him back with the same amount of (dis)respect. I think this is exactly what Aaron means.

Side note: I would expect this level of discussion to be held in the driver’s meeting of a big event like this. The race director can set his expectations immediately and any penalties after that would be understood (whether you agree or disagree with the etiquette).

If I hold the outside line, I fully accept the consequences of doing so, up to and including having my ass handed to me on exit by the inside kart.

I would also expect this in the rule set and the drivers meeting as well. Most of the driving down language and started to include “driving out” as well. depending on the ruleset

There is no “outside line” in karting.

Maybe the word “line” is a bad choice.

So, this is an interesting point of contention between many drivers, and it was explained in a way to me that I liked a lot. This is not the only reasoning for these debates but it made sense to me.

Say you are turning left, and a driver makes a pass on you, so you are now on the outside. Since you’re turning left, both you and the driver on your inside are looking left, down the track towards the exit. You have the line of sight, meaning you can see the driver inside of you. The driver passing you is not going to see you on his outside since he is also looking to the left while you are on his right. As a result, it is on you, as the driver with the line of sight, to avoid an incident. You can risk holding the outside still, but any incident that happens is on you.

Think of it the other way, too. You make a pass on a driver in a left-hand turn. You are looking through the corner and sighting your exit. You have no idea if a kart is on your outside or not, and you have made your claim to the racing line through the corner by making the pass. It is not reasonable to say the kart that has established position in the corner has to compromise their exit “just in case” someone holds the outside. If that were the expectation, every driver would hold the outside and carry their momentum to just make the pass right back.

This is especially prevalent in 206, where the exiting momentum is so much larger of a factor relative to, say, an X30. All that would end up happening is drivers using their bumper to move someone out of the way completely, so that they have no issue of a driver possibly holding the outside on the exit of the corner.

Again, well stated. I would add (might help with clarity for other folks), there is a huge difference between:

Similar thought, but maybe applying it a little differently: I use the same rule on exit as I do on entry. If i can see you, you get space. If I cant see you, you don’t get space. That rule applies whether someone is on my inside or outside.

I use these pics as my guide to rights to a corner on entry. It appears to be printed on a dot matrix printer in the 1960s some time, but is the best diagram I have ever found regarding who “established position” in the corner. 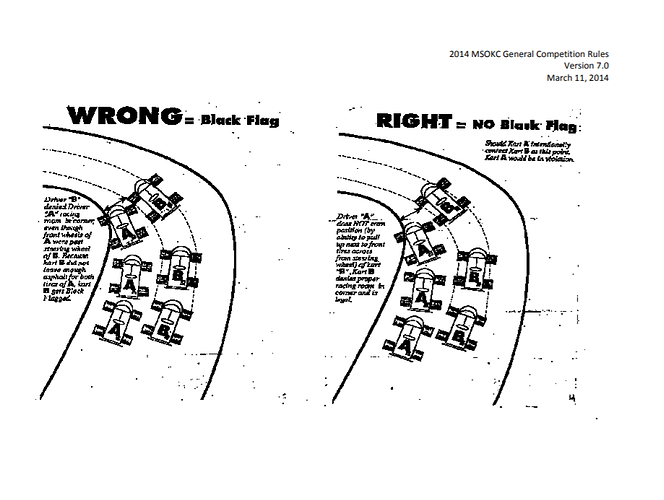 You mean like this? Shameful behavior on my part and I could have just as easily tucked back in. 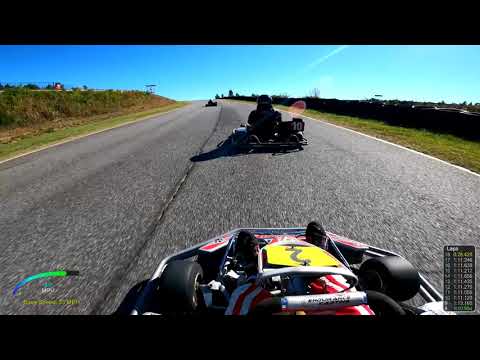 Did you get any warnings?

No. I do dirty deeds far from prying eyes. I kid, but this corner is way off in the back end of a long track.

I didn’t mean to punt but as you can see I am passing a faster driver than him and realize that I could go for a double and keep moving.

I was incorrect in my assumption that I would make the corner sufficiently early. Bonk.

What bugs me about these kind of punts is that it disrespects the other guys race. Yes, I’m faster, but my race is not more important. Sometimes I make bad calls.

Making mistakes happens. Its good to recognize those and learn. However, when it comes to penalties, a race director made it very clear to me recently:

Intent is not a “get out of jail free card” for a penalty. Mistakes sometimes end up as penalties too.

Yup. I think without penalty we don’t learn. Basically I walk away Scott free from accidental punts. If I were doing that all the time, I clearly would not learn from my mistakes until there was a consequence. (One punt in a 6hr is not too bad, though!).

In this case, I coulda waited till he had the apex and pushed him through the corner or whatever. I was laps up. But no.

Maybe its my up bringing during my mini golf career, but if I have a cage surrounding my kart, I see nothing wrong with this maneuver, lol.

Minus the cage, ettiquette and safety are paramount and somewhat interchangeable in my mind.

Its totally not a big deal and more careless than malicious on my part. Mea Culpa. If I were him, I would been a bit miffed. He handled himself well considering he had two guys barreling down on him. It was my lunge that punted him, not him being a dumbass.