Anyone had a chronic chain stretching issue? If yes, what was the culprit and how was it resolved?

Scenario: My brother and I race together and he’s had a run of like 3 chains in as many weekends that have stretched to beyond acceptable spec in the span of a single weekend / event, it needs adjusted pretty much every session and it’s ruining sprockets at the same time with them looking like spikes not spokes.

I’ve run the same chain pretty much the whole year and it stays consistent and it’s well within spec. We’re lost as to why he’s seeing this issue.

Both on 2021 chassis
Both using DID gold chains
Both using a similar cleaning and lubing procedure
Using extremely similar lube (same brand he’s actually using the fancy stuff).
Both with same engine mount setup
Both using “snubber” on engine mount to keep it in place.
Both using laser alignment tool measuring alignment at 3 places on the sprocket.

What’s different. I have a different sprocket carrier but it’s because I destroyed in an “off” and had to buy what the track side support had, he’s on the OEM carrier

…that’s about it. He’s using a bit more rigorous cleaning routine between events? Not sure that’s a “problem”.

We even set the tension together on his kart before going out for any sessions this past weekend and by the end of session 4 (warmup, warmup, 3 lap qualifying, race) the chain was all stretched out.

There was a thought that maybe it was the clutch assembly on the engine…but the engine this past weekend was my backup so it’s not the one that’s usually on there.

We’re at a loss and all ears for what could be going on.

That sounds extremely unusual. One chain, maybe, but 3 is very odd. How are you verifying that they are stretching? What is the condition of both gears (sprocket and cog), worn tooth profile will accelerate wear and as you point out a worn chain will accelerate wear on the teeth. Also are you sure there are no tight spots in the chain? Are you sure the axle isn’t moving laterally at all?

Could the axle be a little bend, causing the chain to stretch? Many rotations can stress the chain.

I have seen even on a straight axle that the chain tension will vary throughout the rotation of the axle. This could be caused by a poor centering of the sprocket on the carrier. Given the number of revolutions the chain makes during the day, an effectively eccentric sprocket will kill a chain.

Sprocket alignment is verified using a laser alignment tool and checked at various spots on the rear sprockets to help rule out wobble/bend in the sprocket or carrier. It’s not perfect but never has the laser not align with the front gear.

The problem is worse on longer runs such as final races and I’ll come in with the chain visibly more slack than when I went out. Usually after that happens the first time the chain will continue to stretch each session after. That makes me think it’s a lubrication issue, but again using the same lube and procedure as Andy where he suffers no issues.

The rear axle isn’t visibly bent, but I’ll try to inspect it again or swap it to see if that can make a difference. Thanks for the idea.

To clarify on the axle front I do spin the axle and check tension after setting things so there wouldn’t be any very tight or restricted spots, but it couldn’t hurt to try it out.

Andy, Is the chain slack the same for the full rotation of the rear axle?

How does the teeth on the sprocket and driver look? It could be a case of an overlap between braking and throttle. My assumption would be it’s jumping to throttle too quickly when the kart is still trying to slow down and putting a lot of stress in the chain.

My bet, bad motor sprocket. Replace them often it makes a difference!

Larry, tension is similar thru the rotation of the axle. Thought to tell absolutely, it might have a spot that’s tighter but it’d have to be a pretty small difference. I’ll see if I can find a better way to test this than just visual or holding a finger against the chain while spinning.

Zach when the stretch happens it’s killing sprockets making the teeth sharp and pointy. I certainly don’t think I’m hitting the gas while still braking, but will go back and review some videos.

Ron, I’ve replaced more of those expensive ass IAME front drivers this year than I’d ever like to.

Zach when the stretch happens it’s killing sprockets making the teeth sharp and pointy. I certainly don’t think I’m hitting the gas while still braking, but will go back and review some videos.

That’s usually a tell tale sign of using both feet at the same time. Whether it’s in the brake zone and you’re not coming off throttle quick enough (not usually the culprit), or trying to accelerate when the kart isn’t happy with accelerating.

Chris, I’ve found that the finger method is good enough for setting, not real critical. There should be slack all through the rotation. If the minimum slack is too tight or the max slack is too loose, then something is wrong. Could the hub be warped and not position perpendicular to the axle or could the motor somehow be crooked (crank not parallel with axle)? Did you check the holes in the motor mount?

I’ve been looking for an excuse to buy a magnetic base for my dial indicator, so I supposed I can pull the trigger on one and use it to check axle runout which would give me a better idea. In my past experience there was typically a slightly tighter area of the chain, but I would always set the tension so that it wasn’t too tight in that area.

Zach, I had a chain stretch and destroy sprockets during this day of testing we did where I was trying to figure out a motor issue. My camera died and I didn’t have another battery so this is the latest video I have of that day, but I’d say I continued turning laps in a similar manner to this in the afternoon.

You see anything here that would liken to the double pedal behavior? 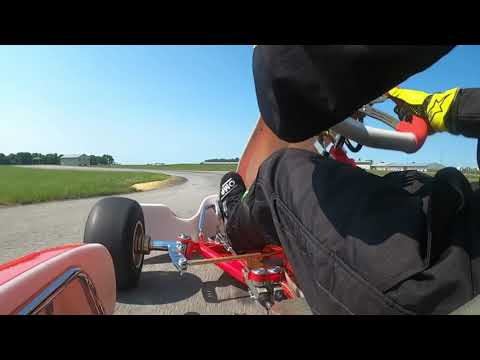 At 3:53 (green corner) is what I’m talking about. You’re on throttle but sliding sideways. So the rear axle doesn’t know what to do. It’s slowing down while you’re trying to tell it to speed up.

Chris how are you determining the chain is stretching? Because it’s slackened - or before/after measurements of the chain?

I’m wondering if the sprocket wear is giving you the impression the chain is stretching because it’s loosened whereas it’s perhaps more likely the sprockets are wearing due to some geometry issue rather than wear being caused by a stretched chain.

Also, on another tack, your kart doesn’t produce enough power to physically stretch and elongate the chain links - chain ‘stretch’ isn’t really stretch - it’s wearing of the link pins. Andy mentioned you have a ‘rigorous chain cleaning regime’ - this itself could potentially be the root cause. Chain lub is much thicker than any solvent, if you’re solvent washing all the lub goodness out it’s not going to get back in there as easily and you’ll be running with little or no lubrication where it matters.

Thanks Zach, I would have never thought that turn/behavior would cause this. Although I’m pretty sure Andy does that turn the same and doesn’t suffer this fate, but I’ll see if he has videos to compare.

Even though this is a new chassis this year and I bleed the brakes regularly, could a sticky brake caliper cause this too? I haven’t noticed anything that would indicate the brakes are sticking, but perhaps just causing enough overlap to create an issue?

Hey Richard, verifying and measuring stretch using one of these tools

Doesn’t go in when new, fits in when stretched.

I used to go further on chain prep to give the chains a full wax bath (speedwax) prior to every race and practice which would ensure that the wax lubricant would get fully into the pins and all areas, but still had this issue when doing that which is part of what led me away from taking all of that time to perform that prep.

Ok next question - are you aligning sprockets only with a laser? How does it look with a straight edge against the axle sprocket? Does it come up the the motor sprocket square or at an angle? That will tell you if the carrier is cocked.

Long shot bit do check the axle closely for cracking between sprocket carrier/3rd bearing, very unlikely as it would I expect have broken in 2 by now but def worth checking.

Is the axle shifting?