My son has a terrible braking habit and I have no idea how to fix it. My son brakes early and stats on the brakes to long and he is 2 mph slower than everyone else in corners. Any tips on getting him to brake at the correct spot and to get him to stay off the brakes in the corners?

We keep telling him to get off the brakes when going around corners but he just can’t seem to get it right. He is either braking to early, to long, or doesn’t get on the gas quick enough.

Any braking tips would be appreciated for people who have braking issues.

Would it help to train him on a sim to get off the brakes?

I know braking can be very personal, and it’s a core confidence thing, @Terence_Dove has a great article on techniques your racer can experiment with and see what works well for his natural style.

Ps, are you near MN? Your name looks familiar.

Try making his brakes more sensitive. One problem I had when I was running OTK was that I had to really stand on the brakes to get to the limit of braking.

What I did to get used to the brakes on my DR this past weekend was on Thursday just stand on the brakes as hard as I could going into 5, the scoreboard and the I-70. Once you’re familiar with the kart almost spinning out under braking it’s so much easier to brake at the limit comfortably enough that it’s almost second nature.

Try some different pads too. They can change the feel a bunch and make braking more natural to a driver.

I used to have a similar problem with braking. There were two things that helped, mostly which I covered in a blog post here. 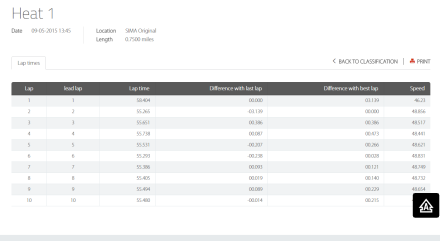 [TagTeam] Part 4 – Breaking down how to brake. #theartofkart

Two weeks ago, I drove in a club race at Sumas Motorsports Academy. It was my second race in my X125 Tag/Velox SK1. I qualified ninth, finished the first heat race in sixth, and the final in sevent…

You are right. We are from Minnesota as part of the Stockholm Crew at Stockholm Racing Center in Cokato, MN. My Son is Blake and he runs in the KPV class. Can’t miss him he is the tall kid that looks like he is going to fall out of his seat sometimes when going around the corners because he has such a tall torso which could be why he has problems braking?

It’s weird because at Stockholm on our home track he doesn’t have any braking issues probably because he has it memorized but when we travel he really struggles. We were at New Castle this past weekend and we were working with TJ Koyen and he said that Blake stays on the way to long going around corners and he was the fastest on the straights but was the slowest on the corners by about 2 mph and we just could not get him to hit the brake, get off it and get in the gas as soon as possible no matter what we did. He says he knows he does it but then goes out on the track and just can’t get off the brakes when going around the corners. Not sure if it is a comfort thing or if there are anything we can try to get him to get off the brakes. The link you sent should be helpful from Terrance Dove so I will have him try that and see if it helps. Plus he is working with two of the best Karting coaches in the sport today with Chris Slinden and TJ Koyen so I’m sure they will be helpful as well. Hopefully with all the input we can pick stuff out to try and get him ready for the next race for Route 66.

I know what you mean about getting the kart to the limit of braking and I don’t think Blake has gotten to that point yet as he is going for comfort with his braking and I’m hoping once he experiences braking to the limit when cornering then it will become second nature to him but right now he just isn’t getting to that point yet as I’m thinking he is afraid of wiping out.

How do I buy Terrance Doves book? I have heard his name before and I didn’t know he had a book…

I know exactly what you’re saying, I did the same thing for so much of last year it was probably my biggest fault. Honestly, go to a practice day at any track outside of Stockholm and just brake as hard as he can. I;d recommend Road America because it has a good braking zone before the first chicane but they have weird practice days, usually Wednesdays which can make planning tricky. Otherwise Badger isn’t bad but there’s only one decent hard braking zone on the new section, others are a bit quick to try braking like that. Literally spin out a couple times if he has to just to though, just get a feel for catching the kart. He should hear the motor drop in RPM as the tires almost come to a stop. Obviously, don’t try braking that hard during a race but the more comfortable he can get with the tires breaking traction under deceleration the more natural braking becomes.

Thanks Aaron. Some good advice. I’m thinking he is where you were at last year. He had to experience that hard braking like you suggest. I will check into the Road America and see what their practice days are and see if we can make it down there. Otherwise Stockholm does have a couple of spots we might be able to use to get that braking feeling like you sugggust.

Can you do the traditional set up a breaking point cone at the end of a long straight and have your son hurl himself at it as you move it closer and closer to turn in?
That helped me and nick a lot. Maybe midweek on a quiet day at the track.

It does help in that if you can do this, he will get more comfortable with hitting it hard initially and he will get used to the end of the track rushing up at him.

That and have him read Terence’s chapter on braking.

Brock,
Here is a link to Terence’s book via the Kartpulse Store: https://store.kartpulse.com/product/learn-how-to-master-the-art-of-kart-driving-terence-dove/

Just wanted to interject before we head down the slightly wrong rabbit hole, that Blake’s issue isn’t braking late. The kid can lock up and brake late no problem, he just rides the brakes too far into the corner, over-slows, and then is back to the gas later. His driving style is more point-and-shoot rather than rolling through the apex. Sometimes he adapts but sometimes we just can’t fix it through the entire weekend.

I’m interested in hearing about this too, as I am a chronic overslower.

Thanks for clarifying TJ. I will say working with you and having you work with Blake has been the biggest blessing any jarred could ask for. You have helped Blake more than you realize and have shown him things that he needs to improve on that we never even knew he was doing wrong. Such as the braking. It’s frustrating sometimes with his driving as sometimes he drives like a champ and then other times it falls apart. Thanks for clarifying what his issues are with the braking I’m trying to figure out how we can work on the issues he had at New Castle at Stockholm during practices and that is where I’m lost. Anyway I know New Castle is a heck of a track to get right especially when you have only driven it two times and it’s frustrating to see him fall apart like he did on Sunday but he said he is bound and determined to do better at the next race which is why he asked what he could do to help get his cornering better and I just don’t know what to have him work on during his practice days but what you said makes sense so I will try to have him work on what you said. Thanks again for all the help you have given him as I don’t think he could ask for a better coach in Karting.

Add a lot of throw on the brakes? Is he tall and maybe having a physical problem coming off them? The latter may not be obvious.

Driver doesn’t like any throw in the brakes at all, he much prefers a stiff, short pedal.

The way I see it, it’s just a bad habit that’s especially hard for him to break. The reason he’s good at his home track is because he’s got a million laps there and can drive the track with his eyes closed. Going to Stockholm to practice won’t do anything because of that. It seems to happen more when he’s uncomfortable in the kart because he’s not a familiar track and doesn’t know every corner by heart.

It was even worse when he was driving X30 because I think he was overwhelmed by the speed and the grip on the MG Yellows. It’s gotten better with the move to the KA, but the over-slowing issue still pops up when he gets out of his comfort zone. Just need to keep working on it and getting more familiar with the tracks we travel to.

Driver doesn’t like any throw in the brakes at all, he much prefers a stiff, short pedal.

Tough ****t maybe? I’m the same, but for the 206 I did better with longer throw. For the same reason. Over slowing.

driving X30 because I think he was overwhelmed by the speed and the grip on the MG Yellows. It’s gotten better with the move to the KA, but the

More seattime. Maybe he needs a battle buddy that “brakes right”, so that he someone to learn with on track?

It doesn’t help that Stockholm doesn’t take any rubber at all. Using the brakes through the hairpins is fast because it keeps the kart planted so it doesn’t slide out due to the lack of grip.

That is EXACTLY what I was going to say. Having another kid, at about the same skill or speed level, run with my kid helped a lot. Really pushed him! Spinning out, or almost spinning out, also helped. Maybe threaten to take his Xbox away if he doesn’t push it harder? Lol. My kid would become Senna if I did that…hmmmm…