Getting ready to get our season started this weekend FINALLY and of course 70 and sunny saturday and 39 with rain for Race day Sunday. We have never raced in the rain so looking for any tips with the kart and/or driver. Hes 8 so who the hell knows what to expect. Really not having a clue about it at all any advice will feel like a win. Also things everyone does after racing in the rain with kart maintenance would be beneficial i know water has a way of getting into every crack and crevice available so i dont want to take any chances with his new kart.

This forum has really helped me since stepping out of my comfort zone and into karting so appreciate it all in advance. Thanks everyone!

I predict lots of cute little munchkins spinning out.
Better drivers will chime in I am sure but if I were to prepare my child for rain, I’d tell him/her to assume that they will need to brake much earlier, and to be careful accelerating out of turns. Basically take it easy.

Also, they say that the rubbered in parts of the track get super slippery and that in rain you should be taking a wider line (not apexing). This, I think, depends on how wet, wet is.

You could show him a YouTube vid of rain footage to get an idea. Let me see if I can find cadets in rain…

I would guess that resisting the urge to make big throttle or brake moves is what really matters, in that if you don’t spin out, you don’t stop moving forwards! I’d also imagine that if you do spin out, don’t give up. Get back in it because the other kids are likely to mess up too!

As Dom said, the rubber is the slippery part in the wet, so you run opposite of the racing line usually, going high in the corners and trying to avoid the rubber a bit in braking zones.

The biggest thing for a young driver who hasn’t raced in the rain before should be to mainly stay out of trouble, keep it on the black stuff, and don’t spin. Half the kids in the class are going to bin it trying to go fast, so just staying out there without going off is going to be both a huge accomplishment for your first time, and will net you plenty of positions. Rain racing is all about confidence and feeling the limits of the kart and trusting the tires, so building confidence by not spinning always helps. I would also say to look forward and pay attention, because odds are there are going to be some spinning or stranded karts scattered on the track.

In terms of driving, it’s a bit different in Cadet compared to a full-size kart, but in general you’re looking to get the kart to rotate at will, and you don’t have the grip you do in dry obviously, so you often need to make much more drastic inputs to get the kart to react. Here’s me last year at a wet race: 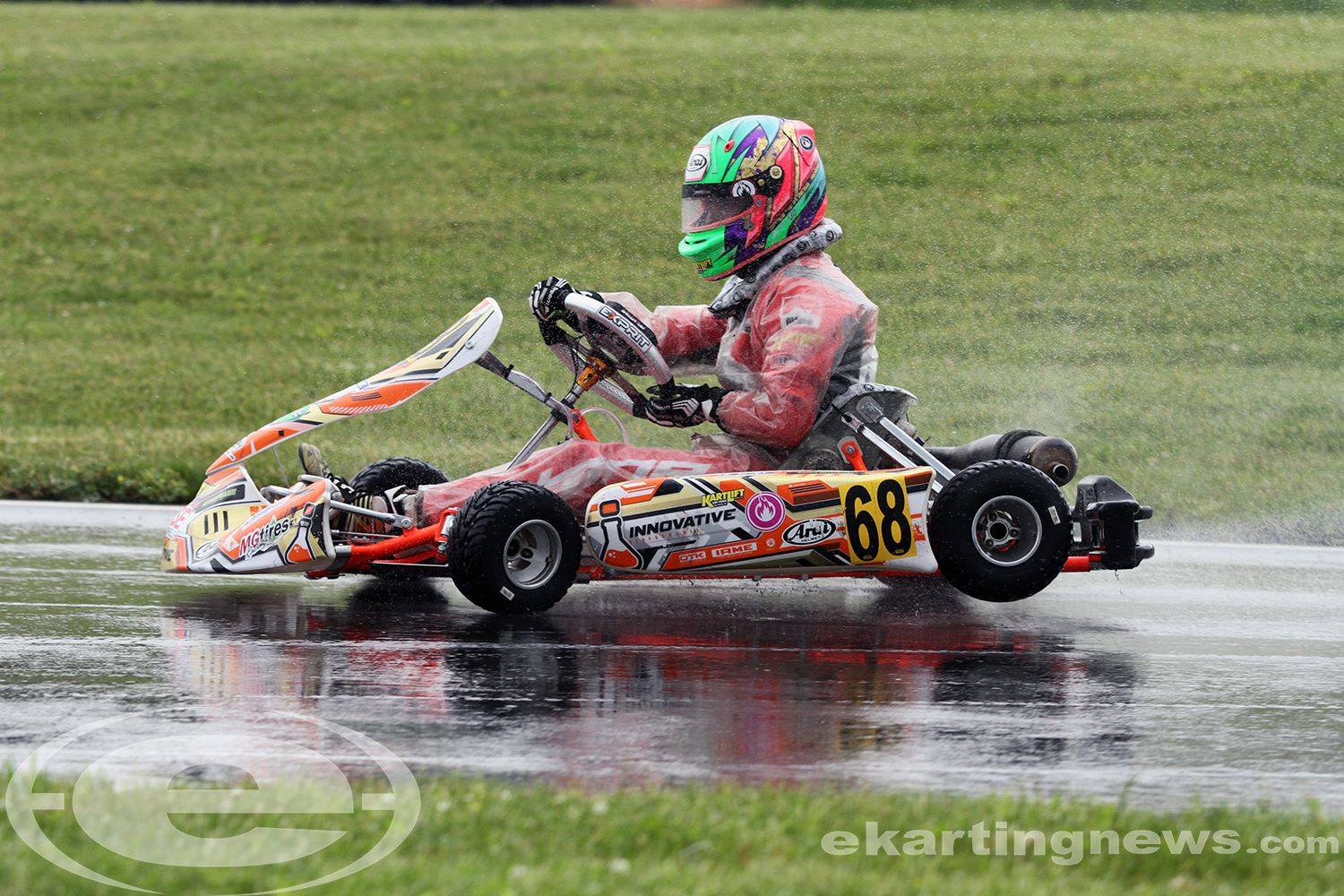 You can see that I’m throwing my entire body into the turn to get the kart to lift and rotate. Using your body mass can really help get the kart’s attitude to change in the wet. In general, leaning to wherever you need the grip is a good strategy. Kids have less weight to throw around so it doesn’t always do much for them, but it’s a good habit to get into.

For setup, the general idea is to go full wide on the front and full narrow on the rear. This induces the most mechanical weight jacking into the kart. You also tend to want a lot of caster in the front, as well as additional toe-out. But the track widths are going to be the main thing. It’s also a good idea to get a phonebook or some kind of seat cushion to sit on to get your weight up and let you use your body a bit more. Same effect as moving the seat up but less hassle. I have a big wad of towels wrapped in plastic and duct tape I bring along.

When you’re done, the clean up is probably the most annoying part, but we just coat everything in WD40 and wipe it down to eliminate rust. Make sure you flush out bearings and chains and everything, because a lot dirt and grime tends to build up in the rain.

Most of all, have fun! Rain racing can be super fun, as long as it isn’t freezing cold.

This one is quite a good video for showing how far offline you may need to be. But to be honest every track is different.

I came back and added this one because watch how Lewis Hamilton takes a totally different line through the hairpin.

Another thing… rain tire pressure is higher. I think it like 15lbs versus 10 for dry or something.

To clarify… wet = higher tire pressure. Presumably rain specific tires have their own recommended psi.
But if you were running the tires you would race in the dry, you’d inflate them more.

Either that or I got it completely backwards and it’s lower pressure in the rain. I’m sure someone will correct me.

Good tips here. @Terence_Dove has a good article on this as well 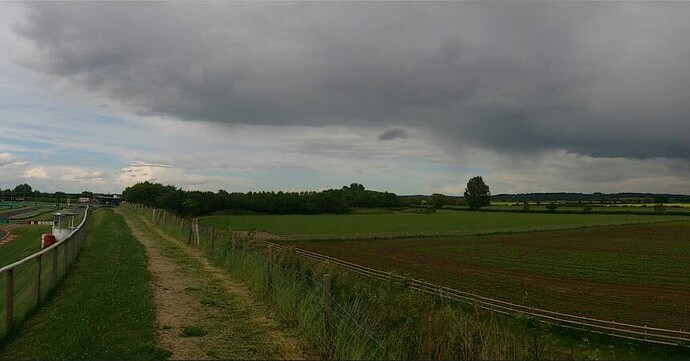 Bring on the rain

PF at the weekend - nobody knew what track conditions would be for any session. This is the new norm for summer karting - dry tr...

Setup wise, like TJ hinted at, get the front out wide and the rear narrow.
Let your driver know they will probably have to turn in a bit sooner and use more input than usual.

Keep it simple, start with those two items so your driver gets comfortable in the conditions then you can go down the rabbit hole

This forum has really helped me since stepping out of my comfort zone and into karting so appreciate it all in advance. Thanks everyone!

That’s awesome!.. Don’t forget to update your profile to your full name

39 degrees and wet is going to be brutal if you can’t keep your son dry, At the very least have away of drying and warming him up. Head, hands, feet and chest need to stay warm to last a little while on track
If you don’t have away to keep the air filter dry, try to figure that out.

You want higher pressure in the rain, but it really depends on the tire you’re running.

On B’stones and MGs we’ve always ranged from 15-23 or so depending on how wet it is. Wetter = higher.

So, did all the kids finish with the correct end of the kart pointing forwards?

Congrats on the weekend Bryan - looks like he did great in his rain debut!

TJ really hit on the basic concepts for the rain.

Specifically for your Energy the ideal situation is to have 75mm or larger rain hubs for the front with all the spacers inboard of the hub. You want to have eccentric pills top and bottom with full caster rolled in top and bottom (blue line forward on the top, backward on the bottom) with one click of positive camber. Also if you have time, raise the ride height from four spacers below the spindle to two. At least 2mm toe per side as well.

For the rear I’d go no more than 10-15mm over the end of the axle to narrow up a little.

Make sure you have the one nose weight between the feet and a full tank of fuel regardless of the weight. Also if you have weight on the rear of the seat make sure it is high.

If your driver feels comfortable with a seat pad, great. But if he says he feels like he is falling out of the kart, take it out. With as short and shallow as the cut down seats are, sometimes the kids just aren’t comfortable not being tucked in to the seat. An uncomfortable driver in the wet is going to be too cautious.

I really can’t thank everyone enough here. I had some login issues and was just able to get back into the forum to thank everyone. Luckily the rain held off until the checkered flew on the last final of the day but IT WAS FREEZING!!! Had a ton of help by folks at the track but at the end of the day I just don’t think he trusted the kart as it was slipping and sliding all over the track but he managed to finish P2.

I know the rain will come and this is where I will come back to when it does. Racing family is a great group of people always has been always will be.

Your knowledge is incredible sir. Boy I’d love to pick your brain one day and just watch and listen. All of these adjustments you mention is something I’m still trying to learn how to do and what they do. I always appreciate your insight. We’re having a blast I just want to make sure I do my part for the little guy

Amen on that. I just had my first regional victory in the pouring rain, using all of these tips.
What I tell my teammates is that rain racing is more mental, than anything else.

So largely, relax, pay attention to the grip of the tire and focus on driving the track.

The nice thing about racing in the rain, is that since the average speeds are slower, it’s less wearing on the body, so you actually have more bandwidth to focus on putting the kart where you want.

Just make sure to prep your visor properly, so that you can see with less worry. Just like @tjkoyen said, as long as it’s not cold, rain racing is fun! 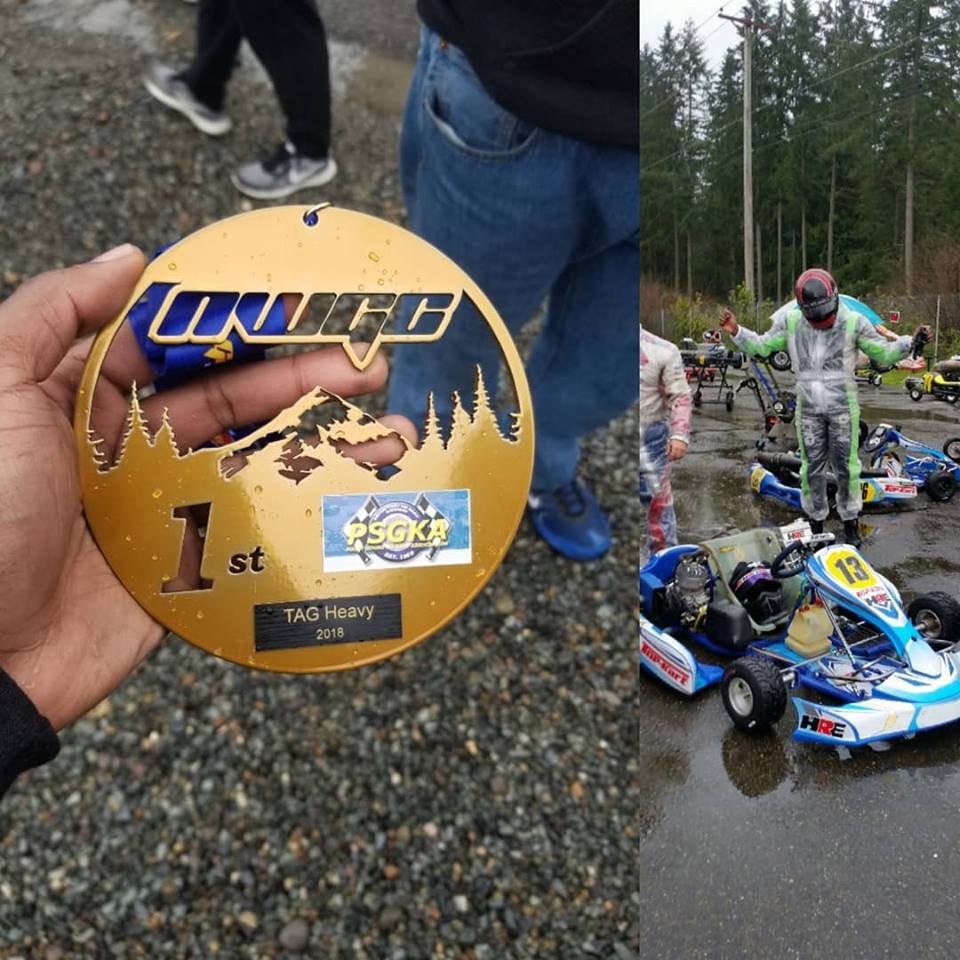