Anyone know when these are supposed to show up? Our first race for COTA ROK is just a couple of months out. 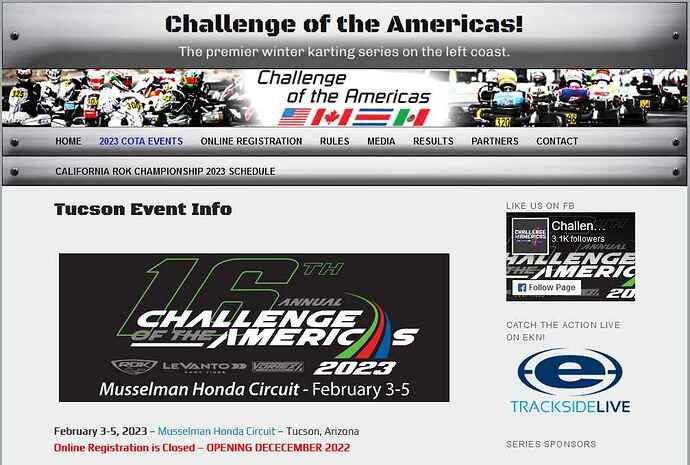 I believe they’re supposed to be going on sale next month? I can’t remember all of the timeline for everything

I think it’s some point in January. I know PSL posted about reserving one with them on their social media so I have to assume it’ll be soon.

Any more countries confirmed as offering grids yet? I only have Italy and one in America. Haven’t heard a peep from Motorsport UK here. I expect FFSA to offer it, but not hearing much else elsewhere.

It’s hard for me to expose ASNs at this stage, but expect news from i’d say 4-5 ASNs in the very near future.

Meanwhile, here is another one which has been made public: Neue Klassen in der Saison 2023 | ADAC Kart Masters

All very much in German

First one is now online, for sale

Right on par with what everyone was guessing. 2900 euro complete minus rad. 2500 euro for bare engine. Hopefully once imported and sold here it doesn’t go up from there. 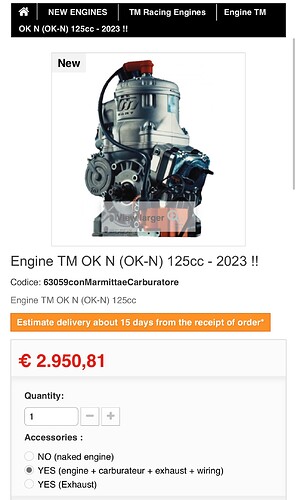 What does everyone think this will do to the ka100 stuff?, if it gets more popular I think this could replace it

What carb actually comes with it? That’s another question

these sort of classes live and die by marketing. I think putting affordability at the heart of the current material from the FIA is an own-goal given that these engines are retailing at a higher or similar than both X30 and Rotax already (which have batteries, clutches and starters).

The engines from TM look pretty clean as usual, but a lot of work to be done.

What does everyone think this will do to the ka100 stuff?, if it gets more popular I think this could replace it

It will have zero impact on KA100. Different markets.

This will impact KA zero percent as Alan said. This is a step above X30.

When they make these engines, it’s specific to certain series in Europe, correct? Are these going to show up in something like SKUSA or USPKS racing? I’ve never seen OK races in USA so I’m guessing no?

I think it’s mentioned but they will be running OK in the Stars Championship Series and Challenge of the Americas series.

So two smaller regional/national series. USPKS and SKUSA have no plans to add OK-N any time soon.

The engines are built to FIA regulations. Once you build the engine to the FIA regulations, you then must homologate it for it to be allowed for competition. The FIA is a global governing body of motorsport, so it’s not a Europe thing technically speaking. The predecessors of OK (Formula A, ICA etc… ) were raced in the USA. And KZ is an FIA class also.

So they aren’t built to a ‘series’ but to a set of technical regulations. The hope for the FIA is various FIA affiliated championships and governing bodies offer the classes to their members/customers. Reception so far has been lukewarm and investment in marketing almost non-existent. This is not a good sign, but things could turn around if there’s enough discontent within the X30/MAX scene.

Ahh ok, haven’t done much looking on the OK-N just saw the price point and thought it was closer to ka than I thought

Hopefully once imported and sold here it doesn’t go up from there.

It will. Mondo sells pretty much everything below American retail prices, so there’s no way it doesn’t go up. For example the TM KZ-R1 Titan Red retails for $5,500, yet Mondo sells the same thing for 4,590 Euro.

That was my first thought, as well. If that’s the Mondo price, go ahead and add 20% for the US retail price.

First of, if they want to compete with X30, Rotax and Vortex Rok the price needs to be similar, and looking at it now it will be a bit more pricy.
Next thing which will be unapealing to most of the Rotax/X30 drivers, being a FIA class you will be able to Tune it, which again will drive the running cost up.
But as i read the regs, the carburators have a Max price at 200euro plus tax, which is okay.

To be honest, I am not seeing the manufacturers being particularly enthusiastic about it either. IAME and Vortex have their own single-make categories, and I imagine they aren’t going to want to undermine them with aggressive pricing on their OK stuff. It makes no business sense to say “come and try OK-N” if by doing so they expose their already faithful customers to buying TMs, who I suspect, will dominate like they do with the KZ classes and did previously the FA stuff with the TM k11b.

TM is the only one that seems remotely excited about it (first to market), and it’s not coincidence they seem to be the only one without a single-make program. OK-N expands their potential customers base, but for everyone else… it’s not quite so.

A lot needs to be done. Not impossible, but there’s so little buzz around OK-N currently. It’s December and this is the FIA’s latest greatest thing and we have a couple of press releases from a couple of ASNs and a series in the states that take 5 minutes to write up, and a video of an engine from TM. These kind of classes don’t survive if they stumble out the gate.

I do hope the FIA get some balls and turn up the heat, asap.

TM Can also see where its going In Europe, even OKJ is showing smaller and smaller fields, OK is smaller then ever.
Our ASN is focusing on the CIK/FIA classes, last year OKJ died completely and OK have been dead for several years, but still they insist this is the way to go, OKN will arrive In 24 i think, but i cant see it being a succes, yes it will be cheaper to run then OK, but have the same flaws compared to X30 and Rotax, to pricy, engines Can be tuned, to many options to choose from(4 engine makes, x carb makes, radiator choices. This will not appeal to most Rotax and X30 drivers, and diffently not at the moment where money is kind of tight.
But that said some things they at least got right, 6 year homologation, no powervalve, and same engine In junior and senior.

Can be tuned, to many options to choose from(

those are features not bugs. Those are what differentiate it out from X30 and Rotaa and make it a ‘real’ racing class as oppose to those bland products. The problem is, as I see it, is the FIA are approaching this trying to hide that fact and present as an alternative to X30/Rotax with affordability bs.

The FIA need to focus on a cultural re-set of the mindset of karters. They still have quite a powerful position within the scene because they control permits/licences. It’s not liek they don’t have the resources.

I think they are still in KF mode with how they approach the sport. This all has echos of ‘10 Key points to KF’. They need to be in 100cc mode with added energy and effort. Get aggressive.