Here is the second kart. This one looks a bit smaller to me. I’ll see both in person tomorrow and have my kiddo take them for a spin! 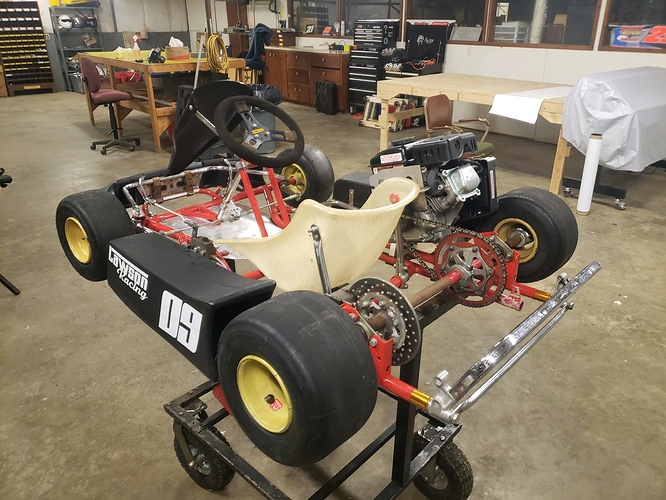 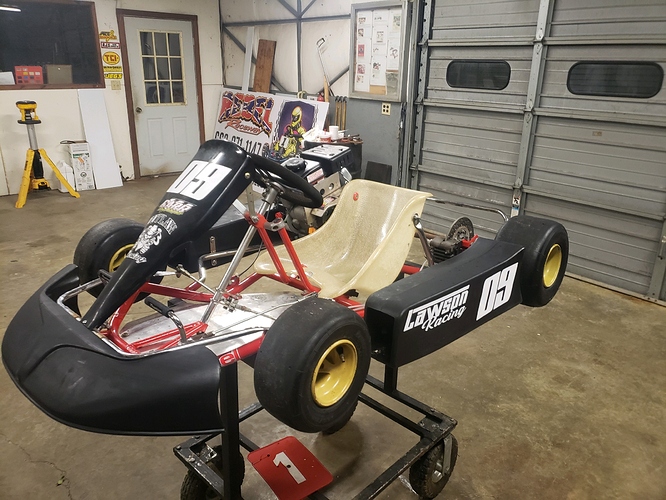 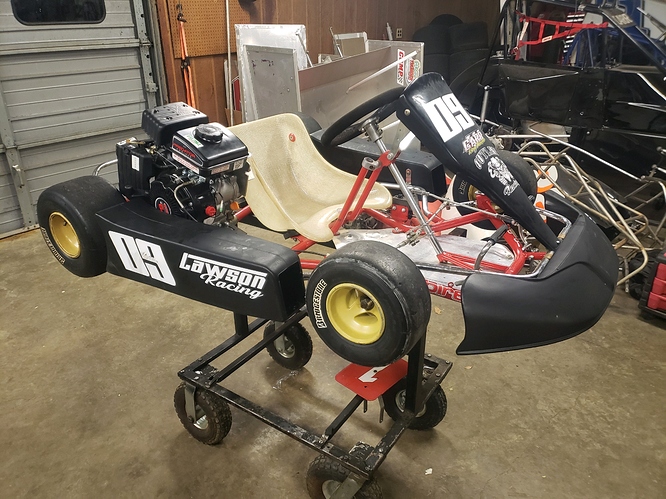 Looks more like a kid kart but still looks like it has staggered wheels or tires, and no trick components. On a kid kart brakes are useless so you put what equates to mountain bike brakes on them to get them as light as possible. Also do really narrow rear wheels to get max rolling diameter out of the rear given gear ratio is fixed.

Also the predator 212 is a crap platform. I’m sure it’s ok for kid karts but generally you either want a 206 with a kid kart slide on the carb or a comet 2 stroke.

There are a few good prepped kid kart chassis on Facebook marketplace currently, that’s the best place to find a good variety at reasonable prices.

I am in UK. We call these karts bambinos .For 6-8 year olds.
Karts have to be of a registered make and spec and are all similar to the Birel B25 pictured above.
Karts have to be 78 cm wheelbase, with cable rather than hydraulic brake.
Engine is a 50 cc Comer 2 stroke.
The# 09 kart chassis illustrated would not be accepted in UK for ‘organised racing’ because it has a hydraulic brake and probably wrong wheelbase , but mainly because the side pod attachment does not comply with regs that have been in force for all classes for many years. ie the side pod attachment tubes must meet the main frame at right angles (see B25 pic above)
Of course your local rules are/ may be different, or may not be strictly enforced.

Yes I believe BOTH of these were Cadet Karts we were about 4” back on the seat and about that much to touch the pedals. The OK1 is a Speedy Cadet Kart. The Briel is a also a Cadet. Both have the spec engine for the local track which is a small 3.5hp clone enough. The LO206 is run at the tracks further away. I believe I am going to pass on both karts because they are not small enough. If I was to choose between these two karts it would be the OK1. The Briel is more expensive and at least 10-15 years older.

I am having NO LUCk finding Kid Karts on FB Market Place. I’m not opposed to driving to get get a proper kart.

Sadly it wasn’t a Kiddo Kart. It was still for a bit bigger kid. it was pretty ragged out.

Darn. Well, worst case you could get a new one. Someone should be a dealer and could order one? Usually there’s a few teams that you would talk to about finding used gear.

I was able to round up all of the used gear I need from a buddy who’s kid I had forgotten raced dirt karts. So we will use it for just a minute then invest in new stuff for his birthday in April.

Around here everyone is pushing to have him in a Cadet Kart… I’m thinking it is because no one else runs the Kid Karts? The predator 67cc engine seems to be the spec engine for this track that is semi local. The LO206 is the norm elsewhere so we will probably have both engines if this ends up being something we do.

The Kiddo was really excited today getting on the karts so that was a good sign. Also not bothered by engine noises etc.

thats sort of odd. It would really surprise me if they had bambinbo aged kids in cadet karts. That seems like it wouldn’t be allowed by insurers or something.
Have you been to the track yet? Do you know where home will be?

Dom, it is odd to me as well the kart just does not fit. I’ve been to the closest “local” track in Saltillo MS and talked with the track owner at great length yesterday and also visited the Margay dealer for the area as well. Both were on the Cadet Karts and it seems like the general idea is they put the small Harbor Freight Predator engines on the “kids” karts at the track in Saltillo and then a 206 everywhere else kind of thing. I really want to start out with a kid kart and a comer. It’s my understanding that he could run as it is just a “fun class”. Given that the track has good access and races twice a month this will probably be “home”. Though unconventional it seems in the karting world as they only run clone engines. I think it has to do with the fact that the guys that runs it is used to the dirt karts?

I am headed to Jackson MS to the other somewhat local track, 3 hours away, next weekend. I’ve put out some feelers there for an actual kid kart to sit in and hopefully we can get on track.

I’ve found a few kid karts witching an acceptable driving distance so I’m starting to look elsewhere. It’s hard to gauge the age of equipment having not been around it but easy to spot well cared for stuff.

Karting Classifieds has 21,560 members. Do you have karting items to sell? Are you looking for karting items? Please feel free to Post here! If you choose to buy or sell anything to/from people you...

Karting Classifieds has 21,560 members. Do you have karting items to sell? Are you looking for karting items? Please feel free to Post here! If you choose to buy or sell anything to/from people you...

I think this last one is my favorite so far. The intrepid would also be good but I’d still have to find a good Comer 50.

The margay in the Facebook pic does look like the right kind. I suppose it’s possible that they just run em on cadet frames but I have never seen that.

In my case, there really only 2-3 tracks/series I’m a part of. So, I’d buy based upon the rules of those series. I’d inform myself by going to Marco (race series director) and telling him that I’d like to start racing my son and say “Help, what do I need to buy and who should I talk to?”.

Since it’s his series, not much risk of being steered in wrong direction.
It does sound a bit confusing out your way. I would have hoped we’d have someone local to help you out but it looks like you get to become our new kid karting expert for your neck of woods.

LOL! I am actually talking with the third one right now (the Margay). Trying to pick one up for my 6 year old. He is only 2 hours south of me.

Here is a link to the Classified Section for Gulf Coast Karters in Houston, TX:
https://racekarts.com/forum323/viewforum.php?f=11

I don’t know for sure, but I can’t see you and a 5-year-old ever fitting in the same car, even after extensive modifications. You’re welcome to prove me wrong. And I’m soorry in advance if I have upset anybody.

They may be using cadet chassis due to limited space and availability to mount the predator motor on a kid kart chassis. The upside to having a cadet chassis is you won’t hopefully need to buy a new chassis when it’s time to move up to the cadet class. The downside is that it’s going to be very tough to fit him to the kart. You’re going to need to use seat extenders to get the seat as high and far forward as possible and then a pedal box to bring the pedals as far back as possible. Figure another $150-$300 for that work.

I don’t think @Pzary3233 or myself for that matter are trying to fit in a kid or cadet kart. The point of this thread was to gain information about kid karts for our youngsters. There is a lot more info out there for senior karts, but very little for kid karts. Sounds like Paul is just focused on getting his kid squared away before moving on to himself.

In the past, I have found searching for karting club websites near me and monitoring their classifieds very helpful. Picked up a few things used in good condition at a fair price. Usually if there is a track, there will be a club associated with it.

Atlanta is doable as well

AMP (Atlanta motorsports park) would be worth a road trip. It’s a uniquely long and scenic facility. It’s gorgeous. Call ahead because it is very popular, according to locals here. 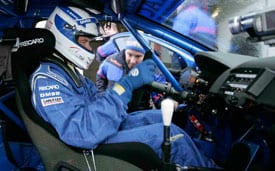 Voted the Top Ten Tracks in North America with amenities for the whole family. Visit Today!

To my knowledge, if you plan on racing kid karts, It doesnt matter what engine package you have. The two series’s ive raced at have had kid kart classes with mixed engines. Normally when buying a kart you have performance in mind, but kid karts the main goal is that it works, and its cheap. Once you move up to Cadets is when the real racing starts and there are more rules in place.