Hello everyone. Thanks for the warm welcome. I’m and east coast transplant. Grew up in Georgia and now live in Dallas Texas. My family has been racing cars for 3 generations. Unlike the others, I put off racing until after 40. Given my budget, I wanted the best bang for the buck and discovered Karting was my ticket (How do you make a small fortune in racing? Start with a big one!). It started recreational doing rentals at indoor tracks, later found an outdoor rental place (Dallas Karting Complex). There I saw proper race karts, not my Dad’s and Uncle’s box frames they used to race as kids. I was hooked. Started looking for a Kart of my own and found several options through many of the regional club’s forums.

I wanted to start used to keep my buy in low being new to the sport. With a lifetime of crewing with the family’s race cars and 25 years in the automotive service industry, I wasn’t afraid to pick up a wrench. Through research and conversations with fellow racers, I have picked up a lot, but still have a lot to learn.

I’m a big guy, 6’9 & 225. I have had a few strange looks we I tell the uninitiated I race karts. At the track, nobody bats an eye. I’m just another racer and everyone is willing to help if i ask. Seems like racers are a family no matter where you go.

Welcome. You are fortunate to have DKC close. I had a terrific day there on a business trip to Dallas. Heck of a track. Say hi to Mike and Mark.

They haven’t hosted any club races in a couple of years. According to Mike, they are waiting to finish building the new track. Saw Mark’s son Jake French ran at the Super Nats and did well. I was glad to see him out after his crash at Road Atlanta in the F4 car. That kid is one of, if not the best drivers I have ever seen. I really miss Shawn, he was the Team Tuner. He was my go-to guy for advise when I first started racing.

The DKC organization is top notch for sure! For those who do not know, DKC (Dallas Karting Complex) is a Premier North American Sodi Kart Team. Their facility offers rentals, rental league racing and club racing, but is also a full service Kart Center. Aside from the near mile long track, is a on site Pro-Shop and Storage Facility. Memberships are available to Kart Owners at varying levels for use of their facility and track…soon to be tracks!

Sorry if this sounds like a plug, but it really is a nice facility and great way to get your feet wet. Check them out at dallaskartingcomplex.com .

soon to be tracks!

Talk more about this…

Talk more about this…

I must first concede I do not have a lot of details on the subject. They have a fair amount of land. Over the last two years, they have brought in a bunch of filler and gravel. It was stockpiled in the north parking lot for a bit, but over several months they were shifting it around with grading equipment. I asked Mike about it and he said they were building another track. It is to go in the field north of the existing track. 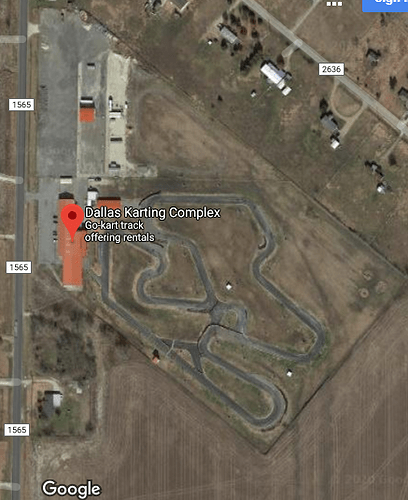 This was also the general reason given for why they were not hosting any club races as of late. I do not go as often I as used to, but still practice there on occasion. It is closer to me than NTK, so its convenient for testing and sorting out the kart before a race weekend.

The last time I was there, it did not look like much progress had been. I asked Mike again and he reluctantly admitted to lack of funding was holding them back. I could see it bothered him, so I didn’t pry. I do not know if they were using proceeds from the rentals, outside funding or a combination of both on this project. The TPKC (Texas Pro Kart Challenge) was held there several years and there were talks around the pits of TSRS (Texas Sprint Racing Series) possibly doing an event there, but I haven’t seen it on any calendars yet. That may be tied in somehow to this project.

Please do not hold me accountable for any information above as complete or current. It is only from my personal observations and limited conversations with others more in-the-know than I.

When I was there Mike had shown the chicane area where the pavement had some issues curing. Hopefully he’s able to get the track the way he wants it. Thanks for sharing. I hope to get back there someday. Coincidentally when I was there, Jake was working and was sort of helping me through the day, which I thought was super cool.

Hello everyone my name is Dustin I’m 31, I live in nipomo, ca. I joined kart pulse to soak up all the great info being new to karting. Although I’m new to karting. I grew up riding/driving dirt bikes, quads, 1/5 scale rc, Pre runners and am a 2 stroke enthusiast and service/rebuild all my own toys. I recently purchased a used tony racer evk with a truetech x30 and plan on running tag at my local club track (smka) to sharpen my driving skills.

Hey everyone, my name is Justin or Flying Ace, and my wife and I live in Southern California. I began in motocross when I was 4 years old. I got to race with a lot of riders that went on to Supercross, be a part of some Day in the Dirt shows and more. My uncle is even a hall of famer in the AMA. I took a break from racing two wheels as I became less and less competitive, and began to focus on 4 wheels. Took a few shots a CalSpeed Karting with the rental karts and went up to the B main in my second race without any coaching. Bought my first sprint kart, and won my first sprint race entered, so I was hooked once again. Now, I’m enjoying being a race official, race director, announcer, and journalist for a few local clubs, NASCAR and Supercross. I also do coach off to the side as well, and hope to get back behind the wheel for a couple more races. Best part is that my wife is also a motorsports photographer, so we both get to enjoy the industry together.