Hello KP members
Today in my training session happened something new for me that I could not understand very well and I´d like to hear your opnion.
I was in a medium grip track with a 4 strokes engine and old set of tires setting up my chassis for the race day (tomorrow). I know it is not recommended to setup chassi with old set of tires, but tires are too expensive in Brazil nowadays and it is hard to avoid doing it.
When me and my mechanic figured out that we had the right setup, we decided to wear a new set of tires to simulate what will happen tomorrow in the race day.
Something weird happened. The lap tire got worse instead of better so we figured out that the setup was good for low grip (old tires) but that setup was bringing excessive grip with new set of tires.
So I went to see the telemetry graphs to understand where the excessive grip was holding us and I realized it was between the middle and the end of the straights.
I brought the graph to show you guys. The difference between these two laps was just new tires. Nothing else. Red line = old tires. Green line = new tires.

As you can see, new tires gave me conditions to perform the first corners faster. The second corner was slower, but probably due to my mistake. Now, look the 4 straights ahead. It is a trend. The speed with new tires is greater in the beginning of the straights when compared to the red line (old tires) but in the middle of the straight it changes. The speed with old tires starts becoming greater than the new tires.
So, my question to you guys are:
Why excessive grip (new tires) holds the kart in the end of the straights? (this is my main question)
What is the physical phenomenon happening?
How to avoid it?
I am planning to replace the rear axle for a more rigid one. Makes sense?

You cant. For me it is the same on DD2 and it has lot more power. With completely new tyres i loose in the first stint around 200 rpm at the end of the straight.

The styres are more sticky. What helps you inthe corner, works against you on the straight. If you use more camber or toe on older tyres try to reduce them on new. The kart will have less drag on the straight but the new tyres will provide enough grip in the corner

When you say I cant you mean I should not replace the axle to a rigid one?

You were up .12-.15 seconds at the early portion of Turn 2 and basically sustained that difference until exit of Turn 4, in spite of large bobble mid sector 3. That bobble might have cost you a 1/2 tenth. Then you make a .1 sec mistake Turn 4. It looks like you put the power on and the kart slid. Not sure what happened on the entry phase of Turn 4 but it might be your line slowing down the kart.

Here’s a simplistic way of looking at what the time difference chart is telling you. If the slope is downward then purple is faster than green and if the slope is upwards purple is slower than green. Note, if you look at the straight away (after Turn 4) the new tires are faster not slower.

Have you look at more than just the fastest laps to see if the time difference chart looks the same, as with the laps shown?

I’m crappy with new tires because I don’t use them enough and can’t drive to their limit and therefore never qualifying on stickers but “bed” them on the warm up session.

Have you look at more than just the fastest laps to see if the time difference chart looks the same, as with the laps shown?

The split report says that I improved sectores 3, 4 and 5 after replacing tires. But it was not so significant as it usualyy is. In this track, usually I improve in average 7 tents of a second when I put new tires. At least 5 tents. 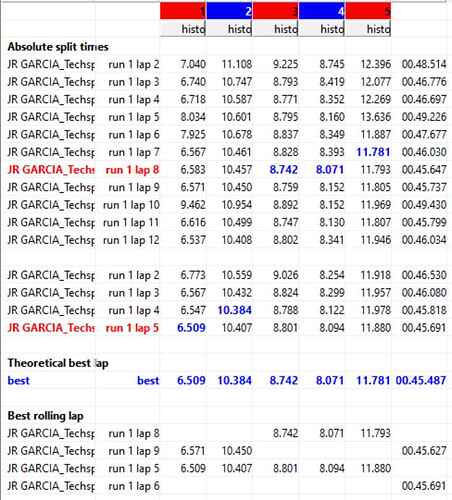 As you do, I usually see the theorical lap as some times we do not have chance to have clean laps due to other drivers, so theorical lap is really usuful to see if the set up helped or not.
In this case I improved just 1 tent of a second in the theorical lap, what is really below my expectations with new set of tires.

I also noticed that you switched over from 2 cycle to 4. If that is the case there are guys that have experience in 4 strokes that probably have better answers than I.

Wow your best and composite is really close. Usually when there is too much grip, it shows up on the time difference chart as continuous upward slope throughout the time domain. Looks like drag or loss of horsepower.

I agree that a 1/10 would be less than expected but that might be the case in 4 strokes.

Usually when there is too much grip, it shows up on the time difference chart as continuous upward slope throughout the time domain.

True. I have already realized that. But in this the grapth is not showing this trend.
Could it be that the problem is not the grip of the new set of tires but the loss of engine power at the end of the straights for another reason?

I also noticed that you switched over from 2 cycle to 4.

It was one year ago. I got used to this low engine power already, unfortunately. Usually the lap improvement in this type of engine in this track is over 5 tents also.

I don’t usually put performance loss to the engine but during the day, the track (grip+air) changes, so you have to keep track of what your competitors are doing. At my track around 12-2PM the track is faster and usually later in the day the track gets slower. I think you need to see if the H axle is better but that might take running it for a couple of races to fine tune it. For me testing points me in the right direction but racing the setup verifies the setup.

Did you measure stagger on the rear with the new set?

If the old tires were really worn, is it possible they were a lesser circumference due to having less rubber and the new tires are taller effectively giving a taller gearing that your kart can’t pull at the end of the straight?

Did you measure stagger on the rear with the new set?

No. Is it you recommend to do every new set of tires?

Hello guys,
Let me bring you the output of my setup changes.
Today I decreased 5 tents of a second in the lap time in the second 14 laps race out of two besides the 8 qualifying laps and below I explain how.
I arrieved very early to the track to replace the axle and to do a full check-up in the kart. Besides replacing a flexible axle for a medium one, I also decided to change the wheelbase and the camber as well, as it was too negative (-4º each side).
In summary, I tried to relase the rear and increase grip to the front and it worked well.
My best rolling time lap yesterday with new set of tires was 45’627 that was considered too high by me as I had 45’691 with old tires. Today (race day) my best rolling lap with another new set of tires was 45’040 (almost 6 tents of a second faster). But it was in the end of the second 14 laps race, so something around lap 36 (8+14+14) of the tires.
I believe the main reasons were a) better grip balance between rear and front b) vacuum (that is pretty significative for 4 stroke engine karts) c) improvement to the track conditions.
Looking to the Channels Report of Race Studio I realized that the biggest difference was in positive column of the longitudinal GPS values, that is related to traction. So, my conclusion was that the new setup with medium rigidty rear axle released the rear and made it to pull better instead of “bog down” (I don’t know how you say it). It helped also to reach better top speeds in the end of the straights adding around 2km/h.
Here is the telemetry grapth including the best lap time from today (light blue).

1/2 a second! That probably made you happy.
What is GPS value?

Also look at the shape of the time diff plot.

It’s a good idea to check it if you have time. Some brands/compounds can be more susceptible to it so it’s worth checking as this can change over time.