Do we know what’s different on the carb on the VLR vs KA yet?

Very interesting. I’ve got a couple hours on mine so far, it fires the instant I hit the button, quicker than my x30s.

Hoping to continue racking up the miles.

How does it fire up relative to your much loved Leopard? Nothing beats a Leopard.

When I ran the KA at the Gopro WKA race- it started in the 2-3 second range (during the day). Would take quite a bit longer when it sat over night.

I believe the Venturi size differential is the reason to blame for the different start up time between leopard/Ka and the x30 which utilizes a much bigger venturi.

Anyone know how much horsepower one makes?

Approx 22HP from what I understand. 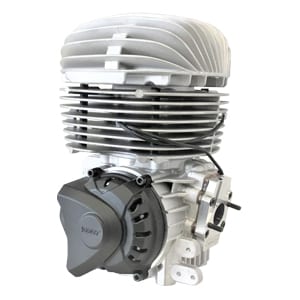 I don’t see anything regarding power there though. Unless I missed it?

I’ve looked at that many times. No horsepower indicated.

Yeah sorry. I thought I read it in there somewhere. Guess not.

Well another season has come and gone…and it sounds like the debate still goes on.

For our TAG Masters we are going away from TAG125’s and going to have the option for either the KA or the VLR.

Does anyone have any feedback for this thread??

Anyone run both engines in last couple years…compare power, reliability??

Not sure which route I want to go. I am leaning towards the VLR because of $$$, but if KA has proven to be more reliable then I would think about the extra $$$ for a KA

Any feedback would be appreciated!!

Only by a KA if you plan on running a series that runs SKUSA rules.

Or anything east of the Mississippi. It’s almost exclusively KA here.

If your local club or whatever Racing venue isn’t bound by skusa then there should be no reason why they aren’t running ka and vlr together. IMO.

Route 66 and USPKS being the dominant “big” series around here means that whatever they run is usually what the clubs are going to run, and both those series are IAME-based, so the KA is popular. At a club level, the VLR and KA should be run together probably, and they will be eventually, there just isn’t any VLRs here right now, so if you break something or can’t get the thing to fire on the grid or something, the likelihood that someone pitted next to you will have a part to borrow or could offer advice is pretty slim is you’re running the VLR.

I hope it gets a place to race around here and they get people running it and make it competitive with KA, so we can run them together and increase field size further.

Justin, I would go with KA in case you want to run Route 66 KA Masters or anything like that. The motor is a little faster than a VLR as well which is convenient, but the big thing is that around here it keeps your options a lot more open for other racing you may want to do outside of TAG Masters

Another nice thing is that you can run the ROK events if you really want to with the KA, but you cant run the SKUSA/USPKS/RT66 stuff with a VLR.

I have almost been fully talked into a KA100 by another club member to run some RT66 races next year. Been looking at otk karts recently.

I really want to just get a shifter though to play around with. Locally there are a couple shifters and 2 125 tag guys. So its a toss up either way.

I’m not 100% sure what this even means? Vortex has been making karting specific engines since the 90’s. High quality ones too.

Can you talk more about your statement in a way that helps Justin (and others) decide which engine might be a good option for them? Otherwise I’ll have to remove the comment.