New to being a kart owner and limited in knowledge as far as chassis setup although I have someone at the track giving me pointers but he’s traveling this weekend. Kart is a 17 Praga Dark with a 206. I’m currently running at 1330 on the rear with 180mm stock Praga wheels on MG Reds and turn in seems okay and but towards the end of the video, is this hopping that shows in the video? Earlier I was at 1370 with a set of Douglas 200mm and had a bad push. When I bought the kart it was set up really narrow in the rear at 1280 with 40mm hubs. I bought a new set of 95mm IPK hubs to get the track wider based on my friends recommendation. There was 2deg of positive camber when I got it. I tried neutral camber with the wider wheels today but had that severe push so I set it back to positive where it was, put the narrower wheels on and the front end felt much better. My final session was a 1:02.02 when the track started gripping up versus earlier in the morning. On another note, am I hitting the rev limiter a little early on the straight? I’m running 15/59 but have spare 58-60 rears and a 16T front. 15/58-60 is what’s recommended at Orlando. Sorry for the lack of knowledge but I’m trying to learn pretty much on my own this weekend. Videos also limited to 3 minutes on the free version of RR. 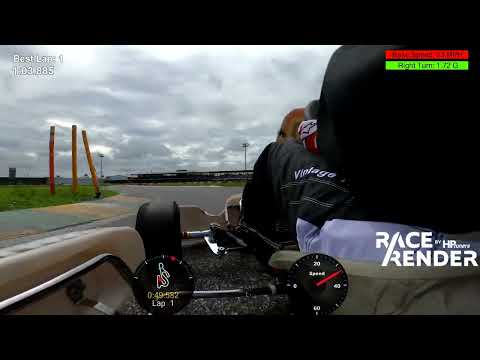 My advice would be to find out what the basic factory settings are for you kart, return it to those and take it from there.

It’s extremely difficult to tune a kart to how you like it from how someone else likes it, better in my opinion to do a reset and tweak it from there.

That’s somewhat where it’s set up currently. I have the setup chart and put everything to neutral based on it. Kart wasn’t happy at the base settings so I’m testing out some different track width. Narrowing the rear track by switching the wheel sets definitely helped. My buddy reached out to me late last night to discuss my practice session. He realized that the 206 class typically runs 11x6-5 MG Reds and it came with 7.10’s on the stock 180 wheels as well as the spare Freeline 200’s. He said it was too wide a tire for the lower horsepower 206 and would push and hop due to excessive sidewall. The 7.10’s sit very square when looking at them from behind. It makes sense to me that it would roll onto the edge and bite better with the rounder profile on the narrower tire. I’ll get some correct rear tires and keep dialing it in.

I think the others have the handling recommendations covered, but regarding your gearing, I’d definitely throw a few more teeth on the rear. Lots of turns, and you barely hit the limiter in only one place.

Sounds like you’re getting good advice, just don’t change more than one thing at a time then you get a feel for what works and that doesn’t. If something doesn’t work it’s easy then to dial it back and try something else.

That’s the approach I’m taking, change only one thing and see if my lap time improves and if the kart feels better. If not I go back to where it was and move on to another change sometimes as simple as an air pressure adjustment. Seeing as I’m not too far away from a good pace at OKC, some improvement will hopefully come with seat time alone. I definitely figured out that if I can’t trust my kart to make a particular corner I approach it with some apprehension. It was literally my second weekend out in it and I’m starting to feel more confident about my abilities and running in traffic with faster karts on the track all around me. Pretty happy with my progress so far since I just started karting as an owner. Their rentals are pretty rough as far as handling goes. The 206 is all about momentum and being smooth which will only come with pounding out laps.

Quickest and easiest thing to fix hopping is to widen the rear track in 5mm increments until you get it to settle down.

Hopping from apex out, like TJ said can usually be fixed by widening the rear track. If that doesn’t help, you can carry a little more brake into the corner (trail braking) to modulate your apex speed and put less of a load on the outside rear tire.

There are a few other factors that contribute to hopping as well. Your body type and seat position can be big factors. For example, I am very tall and so my center of gravity is higher than the average driver. I have to tilt my seat back a little to drop my COG otherwise I can overload the OSR tire inducing a hop. You can also dial out some Caster to change the mechanical lift of the Inside Rear tire. Either way, I would start with the right tire and wheel setup recommended then adjust from there.

Listen to TJ before you start to spend money, people are so quick to replace equipment. Move the backs out . You are over gripped.

Jessie, I agree but the Kart really did have the wrong hubs on there when I got it. I’m only buying what’s really necessary to get it back to the factory specs and parts. As mentioned for some reason it had short hubs, a really narrow track and a seat for what I can only imagine is someone less than 150lbs. For a 2017 chassis, it seems to still be competitive and I’m sure my current driving abilities is leaving quite a bit of time on the table.

If that doesn’t help, you can carry a little more brake into the corner (trail braking) to modulate your apex speed and put less of a load on the outside rear tire.

It reminds me of being at a race. I had the ear of the guy that designed the kart. He helped me gain a lot that day. I had one last corner I was hopping in. I asked him what I should do about that. He said “Drive smoother”

. So making sure you are not being too abrupt and overloading the outside tire is important to remember

I had one last corner I was hopping in. I asked him what I should do about that. He said “Drive smoother”

Racing is so simple. I always say, my two secret techniques to go faster are:

I can assure you my driving definitely needs some work coming from the rentals that drove like a tank to something that actually felt much smoother and responsive during my first shakedown run 3 weeks ago when I got my own kart. I was running a 1:07.51 the first weekend and am now down to 1:02.02 with the wider rear track and trying to be smoother with my inputs. For a rookie, I’m happy with my progress so far and just need another 2.5sec to be with the fast pack and not in the back. (

Just a thott: the whole drive smoother thing also involves the throttle. Coming from rentals, you are probably used to going flat asap which isn’t necessarily the case in lighter/faster karts. Hopping mid corner usually is an indication of asking too much of the kart laterally. While this could definitely be setup related you might also want to play with rolling into throttle progressively.