Hello all, first post. So I have been beating my head over this Kart. I picked up a kart in a trade, I’ve wanted a kart since a kid, it’s a IAME Puma supposedly. The guy said it was a 100cc. It’s older, but by looking up the numbers that I found, I can find 0 information. I’ve tried every site imaginable.
It has the IAME badge under the front of the motor with a BM on it, then two sets of numbers with one letter, each set on either side of crankshaft like down where it bolts to frame.

I’m telling you that in hopes someone can help me identify, because my main issue needs that info.

So here’s my deal. The clutch burned out. I let my 9 year old ride it in my neighborhood, he babies the throttle, smoked the clutch, I’m sure this is a no brained to you guys. My question is, is it possible to just put a predator 212 type clutch on this motor instead of the 200$ one that is made by IAME? Again, I’m looking at the x30 clutch which I know may not be the right one, but it looks just like the one on my motor. Mine broke , the ears busted off.

I can’t find this topic anywhere on the web if a 4 stroke clutch can be used on a 2 stroke motor.
Can anybody please tell me if it would work? Assuming the shaft is the same size obviously.

The kart will be used as more of a fun kart than serious racing kart, for which it was built. This thing, although older, was built to race, it’s got all the doodads.

One more thing, before my son smoked the clutch, I rode it daily, in my neighborhood, for about 2 months. Full balls to the wall of course. And it runs like a dream…
I don’t know, maybe you guys have one of those Briggs and Stratton racing 4 strokes lying around and want to trade me? Pretty sure my engine is worth significantly more(I think), so maybe that could be a come up for you? I just want to be able to ride, but ride fast on this thing

Can you see those pics?

Short answer: No. Even if the 2-stroke crank shaft was the same diameter as a Briggs, the engines operate at completely RPM ranges.

The clutch engages at a certain rpm, pardon my ignorance but why would it be a problem? And I guess what would happen, assuming the shaft were correct size, if I did use the 4 stroke one?

Is there a cheaper alternative clutch I could use I guess is my bottom line? Like one from bmi karts or something, one of the 50$ ones?

engine probably wouldn’t pull at low RPM
On my KT100 it would engage lower than the minimum idle speed.
Higher HP would probably cause it to slip, then overheat.

@Dirty_Wrench_Guy Please update your profile to reflect your name.

The taper on the clutch will be completely different so you’ll have to machine a solution for that.

My concern is that clutch designed for a low RPM four stoke, (which rarely sees at most 11k RPM at most may come apart at 15k+ RPM. The load increases with the square of speed, so those extra thousand RPM make a BIG difference. If it does come apart you won’t want to be within a quarter mile of it.

It’a also a lot heavier which might not be kind to the crank and main bearings without an external support bracket. You could be looking at a snapped crank.

Lastly, the engagement speed of a clutch for a four stroke is likely lower than the idle speed of your TaG.

Not worth it IMO.

You could try converting it to direct drive and make it a push start.

Thank you guys for the responses. Looks like I’ll have to buy the right clutch. Anyone have any idea what motor I have? I can’t order a clutch until that mystery is solved? I believe the SN are in pic above

Paging @Mynameismcgyver and @Alan_Dove. Any idea what particular model of (what I think is) an aircooled TaG 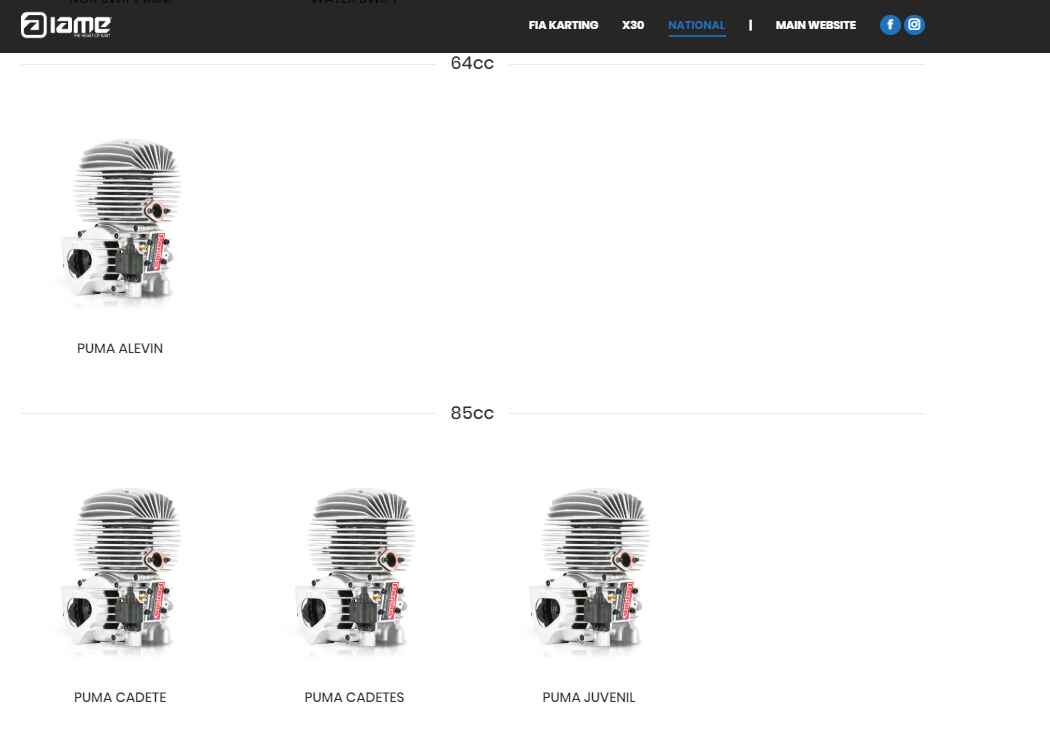 Looks like a TaG version of one of their Cadet engines

Info from the net.

IAME Puma 100cc.
Bore 52.4 mm.dia
Stroke. 46.0mm.
Carb .Tillotson HL334B
HP 16.5
From the pics on the net I can’t see anything to show it is not what you have been told it is.
BM were an Italian kart engine manufacturer taken over by IAME years ago. Most IAME engines are marketed as Parillas but looks like the BM brand was used for some regions/ products?
I don’t think this is a common engine certainly not in UK but a clutch centre from another IAME engine may fit. Old style 07 IAME Leopard ???.Still stupidly expensive though.
Maybe you could take the engine to a local builder and try for a used one. Best of luck!