Admin Note: I’m reposting the Kartpulse Series ‘Old Dog, Old Tricks’ written by Kartpulse Contributor, Greg Wright in a series of posts on the forums. Interested to hear more from Greg and road racing, check out his Kartpulse podcast that we did a few months back! (I’ll bug Greg to join the forums soon.) 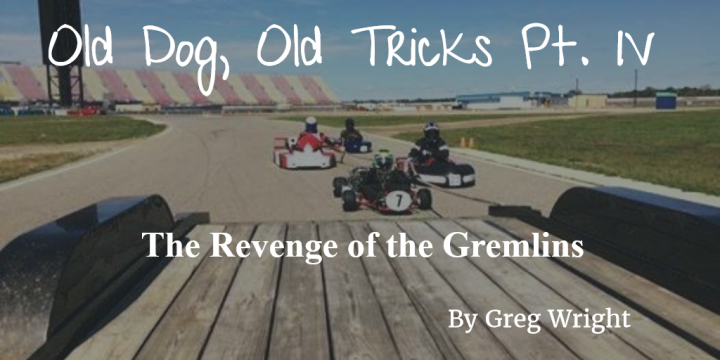 The adventure continues with another outing racing a Vintage 76 Margay Enduro courtesy of my good friend “El Patron” Dean Axe. This time at Michigan International Speedway (MIS) and the final AKRA point race of the year.

After a nearly magical and almost flawless outing at Mid-Ohio the inevitable Yin Yang (Google it) theory showed its darkest side at MIS. The format was a bit different with no Friday practice day and extra practice on Saturday morning in its stead. I understand the reasoning behind not having Friday practice but personally I prefer it.

Yours truly hadn’t been to MIS in 24 years (!!!) and very little from then transferred to the present. The track itself is uhhhhhh different compared to most road courses being a “roval” in an unusual way. You run the high banked oval portion backwards going clockwise and enter the infield section of the track between what is normally turns 3 and 4 on the oval.

The excellent Michigan Kart Club (MKC) team worried about a very high speed entry into the road course modified the corner with the familiar orange traffic cones taking the line high and actually past the corner looking for all the world like an Autocross layout and every bit as slow. The infield section is pool table flat and more or less featureless making the sight lines in the corners rather vague particularly from the seat of a laydown. I have to give kudos though to the MKC, they ran a crisp schedule and hassles were minimal to nonexistent. Great jobs by Ron Taylor, Bill Anderson, Bob Cole, Chris Williamson and Fran the Grid Lady.

Regarding the sub title of this article the Gremlins were out in full force. To make things worse the Gremlins were a sneaky bunch often wearing disguises as other types of the nasty beast. Come the first practice session we took to the track for a few orientation laps, it was immediately obvious that the clutch engagement was a little high and the tire pressures were way off for what was needed on the cool, green track surface. The latter proved conclusively by an elegant skate right off the track in the first left hander in the infield section.

Cutting the session short to make some adjustments after two laps was when the Gremlins gave a hint to their existence. Pulling down off the oval and turning fairly hard right into the pit lane the engine died. No gurgle, no yawn, and no clunk it just died. I said to myself “Self!! That’s weird.” After adjustments were made it was back on the track, leaving the pits the engine pulled very hard and when we got to the slow hard right hand turn into the infield the engine died and I came in on the tow rope.

Examining the kart I guessed that the engine must have just loaded up under braking and died so adjustments were made to take care of that. Back on the track, make it to the turn into the infield and the engine died and I came in on the tow rope. Puzzled I did something that I normally don’t do and cranked some idle speed into the carb.

Back on the track, turn into the infield and the engine died and I came in on the tow rope. To my horror I find that practice was over for the day. More adjustments and then it was time for race prep with great help from Dean, his partner in crime Fred Trogdlon and the always faithful and inscrutable Gooseman (?).

Come race time we lined up 12th on the grid, the flag waves and I get a great launch off the line moving to 3rd before the turn into the infield. Unfortunately Dave Corwin who was 2nd at the moment went into a flat spin directly in front of me, I took evasive action and as I gathered it up, the engine died. Yep came in on the tow rope. By this time I was on a first name basis with the tow truck driver, saw pictures of his kids, heard about his vacation and all that. Did some serious searching of the machine and concluded that the lock up missing the spinning Dave Corwin allowed the engine to die. There was the faint sound of a chuckle that I now recognize as a Gremlin watching his plan unfold.

The unflappable Gooseman (?) and I had a fun dinner at a Jackson Michigan barbecue joint called Rocky Top and it was off to bed still wondering about the mysterious chuckle heard as we left the track. Sunday dawned cool and clear and we made our way to the track in total darkness. Did I mention that MIS is literally in the middle of nowhere with only two lane blacktop taking you there?

Sunday practice began and when our round came up we pulled off the line strongly turned into the infield and the engine died, (wait for it) Came in on the tow rope. Time was running out, one round of practice was left, more adjustments, more idle all the while hearing the chuckling increase in volume as we pushed back to the grid. The engine caught instantly, pulled strongly out of the pits, turned into the infield and (yep) the engine died.

While waiting on my new friend the tow truck driver and wishing I had a Bic Lighter with me to burn the damned thing down I was jarred into thought by the yet louder chuckle from the increasingly bolder Gremlin. I said to myself “Self!! Why do you keep coasting to a stop in the same place?” Bingo!! It was always immediately after a right hand turn, Hey stupid it’s not the engine!!

By this time my left arm was a few inches longer than the right from hanging onto the tow rope (Yep on it again) and my mind racing for an answer.

Dean and the Gooseman (?) were waiting in their customary position with the kart lift. At my wits end they pull the kart back to the garage. The laughter of the Gremlin was echoing from the steel walls of the garage and a little light went on in my aching head. I said to the Gooseman (?) “Take a look at the rear gear and tell me if you see anything.” Sure enough the gear showed signs of having rubbed against the frame. It was obvious (sort of) that in a right hand corner the frame was flexing enough for the gear to lightly touch the frame thusly killing the engine.

About that time it was announced that our race group was being moved up by two slots and we had 90 minutes to get ready for the race. Concluding that there just wasn’t enough clearance between the gear and the frame we repositioned the clutch. Upon finishing the work with about ten minutes to spare the hair stood up on the back of my neck as the cackling laughter of the Gremlin drowned out the first call to the grid.

This time we gridded up in 8th place and getting a great launch off the line led into the turn into the infield where to my amazement we kept on going. At the next right hand turn the kart bogged slightly allowing the amicable Greg Odell into the lead but we kept going.

Gales of hysterical Gremlin laughter nearly drowned out the sound of the engine and something clearly was amiss. The kart began to vibrate and lose pace lap by lap. Badly bogging off right hand turns and starting to handle unpredictably. The farther we went the worse the vibration became, looking at the countdown timer at the start/finish line I saw that we had just over 10 minutes left in the race and decided to try and soldier on and at least finish. By this time the vibration was so bad that I could no longer read the braking markers leading into the turn into the infield and had to instead count them as I went by.

Buzzing, rattling and clanking the kart got steadily worse but I was determined to make it to the finish. Trying to determine how much time was left in the race I began what I thought was the last lap but the nearly insane laughter of the Gremlin gave me doubts and rightfully so. I crossed the line with seven seconds left before the checkers. Oh No! I’ve got to make another lap, nearly losing power completely at least twice on the final circuit but somehow finally staggering home in a distant 2nd place behind Greg Odell who also had won the Saturday final.

Gooseman (?) arrived with the kart lift and as I push the kart back towards the lift I find that it will barely roll. Once back to the garage a quick examination showed that the rear axle had started shifting, essentially putting on the brakes in every corner and allowing the rear gear to very lightly buzz the frame at times. Relieved to have finally found the problem that we had fought all weekend I looked out the garage door and could barely make out the murky outline of the Gremlin, leaning against the edge of the door with a satisfied smirk on his face, smoking a cigarette…the next thing I know “Poof” he’s gone.

While I’ll admit to being mentally exhausted by this time and getting loaded up for a long, quiet and reflective drive home. Suddenly a new plan was offered. You heard it here first folks. Come the end of the year the Dean Axe Vintage Racing Traveling Road Show will be competing at Daytona Kart Week at Daytona International Speedway.

Stay tuned as we thoroughly dispose of the last remnants of Gremlin possession and prepare to return to an event that I’ve been fortunate enough to have won on five occasions.

***Greg Wright is the owner and operator of Rapid Racing in Clermont Indiana, a full time, full service kart racing supply since 1983. ***