Anyone have some insight into the optimal exhaust gas temperature for Vortex Rok GP?

@Muskabeatz could help you better with that, I suppose… Taking the opportunity to ask the same for the TM-KZ engine if anyone has this data?

@phastafrican, my understanding is that the goals will always be in celsius, 450 minimum and 650 max for normal temp conditions (around 20-25) - If the air is colder, temps should go higher and vice versa…

While I do have a decent amount of experience with jetting/carburetion, I am NOT an engine builder. Just a disclaimer.

I don’t have any experience with the Rok GP. An important point to consider with rev-limited motors though is that you’ll need to benchmark at an RPM a bit below the limiter, as EGT temps will spike once the limiter engages.

1200* F seems to be a safe number for most engines I’ve seen. This would be near peak RPM, but not engaging a limiter. Some engines may like to be slightly lower, and others a bit higher. You’ll want to cross-check by examining the spark plug, piston, and exhaust header/pipe. This number may vary depending on the fuel you’re using, so always start rich and adjust down in small increments. These numbers are based around the use of the larger sensors with the 90* bend. The smaller, straight sensors will read ~150*F lower.

With some engines I’ve found that higher load (higher speeds and/or taller gearing) will cause an increase in exhaust temps, and thus require more fuel. Example being Battle at the Brickyard at IMS we had to run significantly richer with the Iame 175 SSE vs a standard sprint track.

@Rodolpho_Brito @Muskabeatz
Thanks for the input. Using a 90* bend EGT sensor average temps 89-90F (32 C).
A friend mentioned 1250*F being the “magic” number so made the decision to lean out from a 128 Jet to a 125 Jet. Asking around the paddock, it didn’t sound like anyone else was running such a low number so I had some concerns. My top speed did also drop a little, but that could be due to the warmer air in the afternoon.

Not sure what else to keep an eye out for. Only my second weekend in a Rok and first weekend looking at EGT so appreciate the feedback here. Based on the comments, the change I made did get me closer to the target 1250*F. I’ll speak with an engine builder when I get a rebuild (I’m sure they’ll tell me every engine is different) and figure out if I’m on the right track. 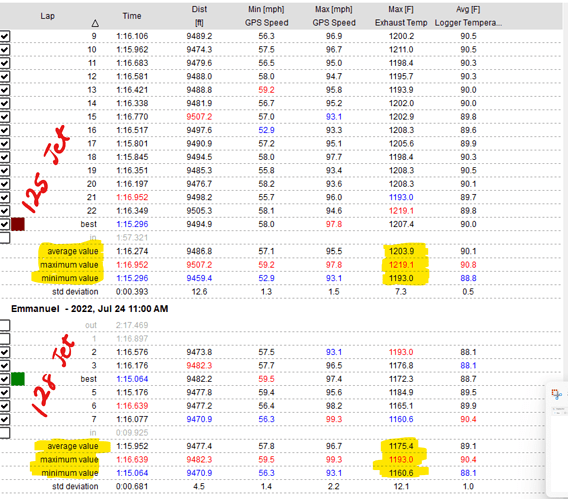 Based on your lap times and speeds I assume you’re running long-circuit? Also looking at the variation in max speed it seems the draft played a big role. Ideally you’ll want to use the graph of your data to overlay speed and RPM vs distance and compare on laps where you know you had zero draft.

What I can tell is to do not be obsessed with this or that, or the engine needs to be this temp or that temp… I am telling that cause in the beginning I was the same and sometimes I am still the same.

The “magic” number or the data we discuss here are just base points, but, you need to find on track what works best for you just like you did, you went leaner to approach the numbers we are saying and as you can see you dropped your top speed, so maybe it is clear that your engine needs more gas, so get back to the 128 jet.

There will always be a little variation from case to case just like you mentioned, because of a lot of factors, external air temp, elevation, rev limiter.

My advise here is, it’s great to come here and look for guidance, but the best guidance you can have are the tests you’re doing when you’re in the track. If I were you, I would try to go richer and see if it increases your top speed or if it also improves your lap time.

Yes, full road course. This was Nelson Ledges. Draft is definitely a factor and I have a terrible memory (as do most of us) so I rely heavily on video but the new smartycam sport 3 is too heavy for the gopro sticky mount on the radiator and I didn’t have a roll bar mount ordered so no video to refer to

. It’s a tight pack so barely any laps without being pushed or drafting during the race.

Ideally the racing will always be that tight amongst a few of us at the front, so I wanted to see the impact of the tightly packed racing on the engine performance.

I didn’t get a long run in practice, but pretty sure I had no drafting, and the track was just drying out so likely elevated moisture in the air. Temps were also much cooler 13*F cooler. Not sure exactly the impact of those variables but the EGT was definitely lower. 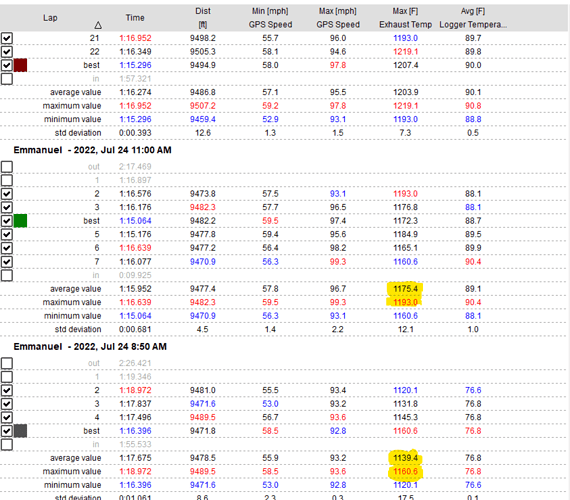 What I can tell is to do not be obsessed with this or that, or the engine needs to be this temp or that temp… I am telling that cause in the beginning I was the same and sometimes I am still the same.

Haha, sounds like I’m a typical NOOB after all. and will probably fall into similar habit since I enjoy staring at data. Point taken about not obsessing over it though. Drinking from a firehose… first 2 stroke action for me and just geting back to karting after nearly 3 years out.

Only just starting to get comfortable and every track is new for me so I’m learning all throughout the weekend. I’ll make it a goal to spend more of my test day afternoon trying out some of these changes and hopefully next year I’ll know most of these tracks so can actually have a baseline for what I’m doing.

That is great and we all have passed thru this.

Another quick tip that I can give you is to keep records of changes and effects you felt; this is a huge time saver - Especially when you are at racing weekends.

Keep it up, don`t be afraid to come and ask and also to do testings. It is all learning.