As with everyone, I love looking at everyone’s pictures and getting to see life on and off the track with the other categories. After our night racing last night, I figured we might want to share pics from damage and destruction we’ve sustained at the track.

My daughter broke her axle last night, and we had some damage that might be worth sharing. 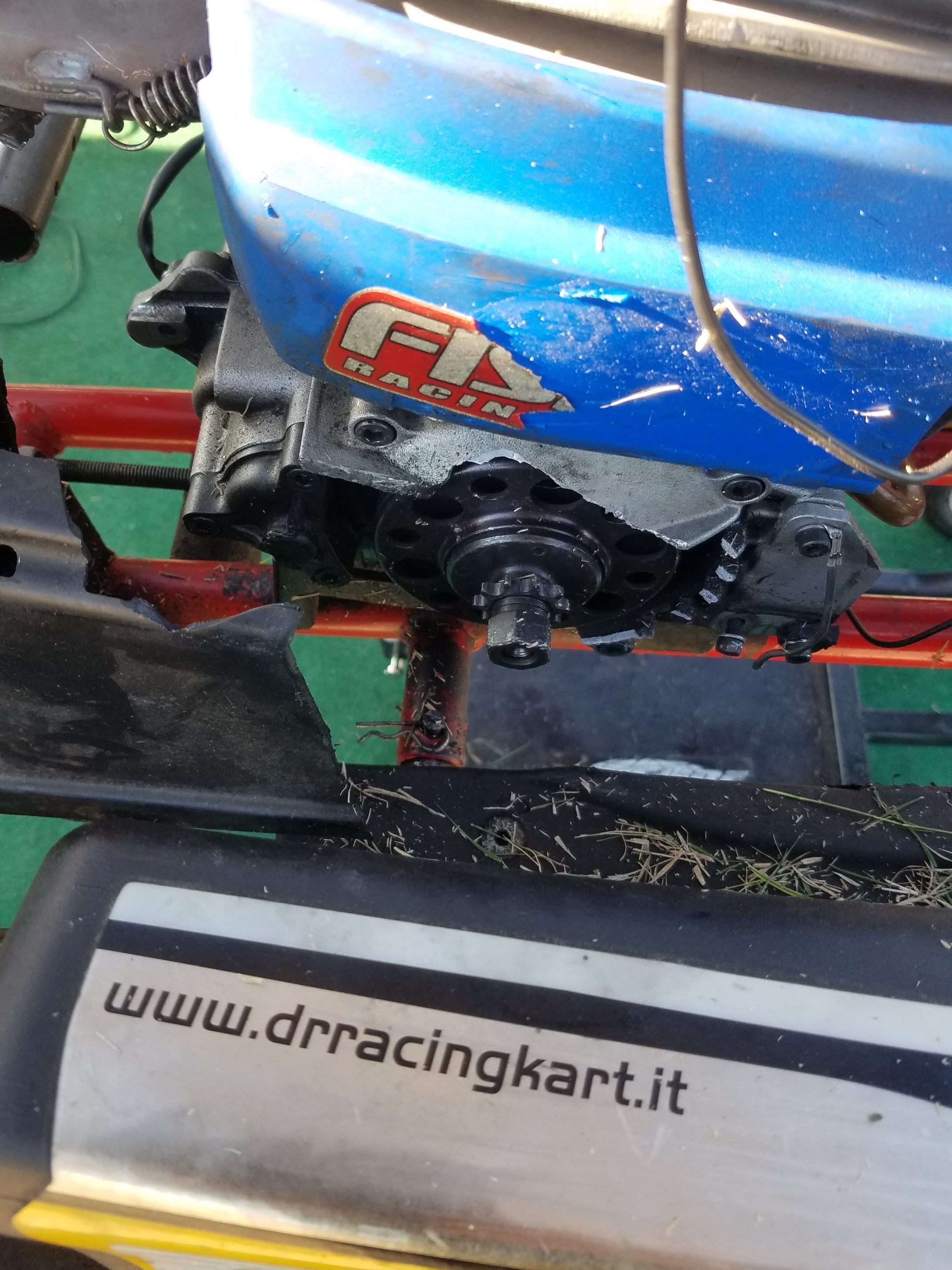 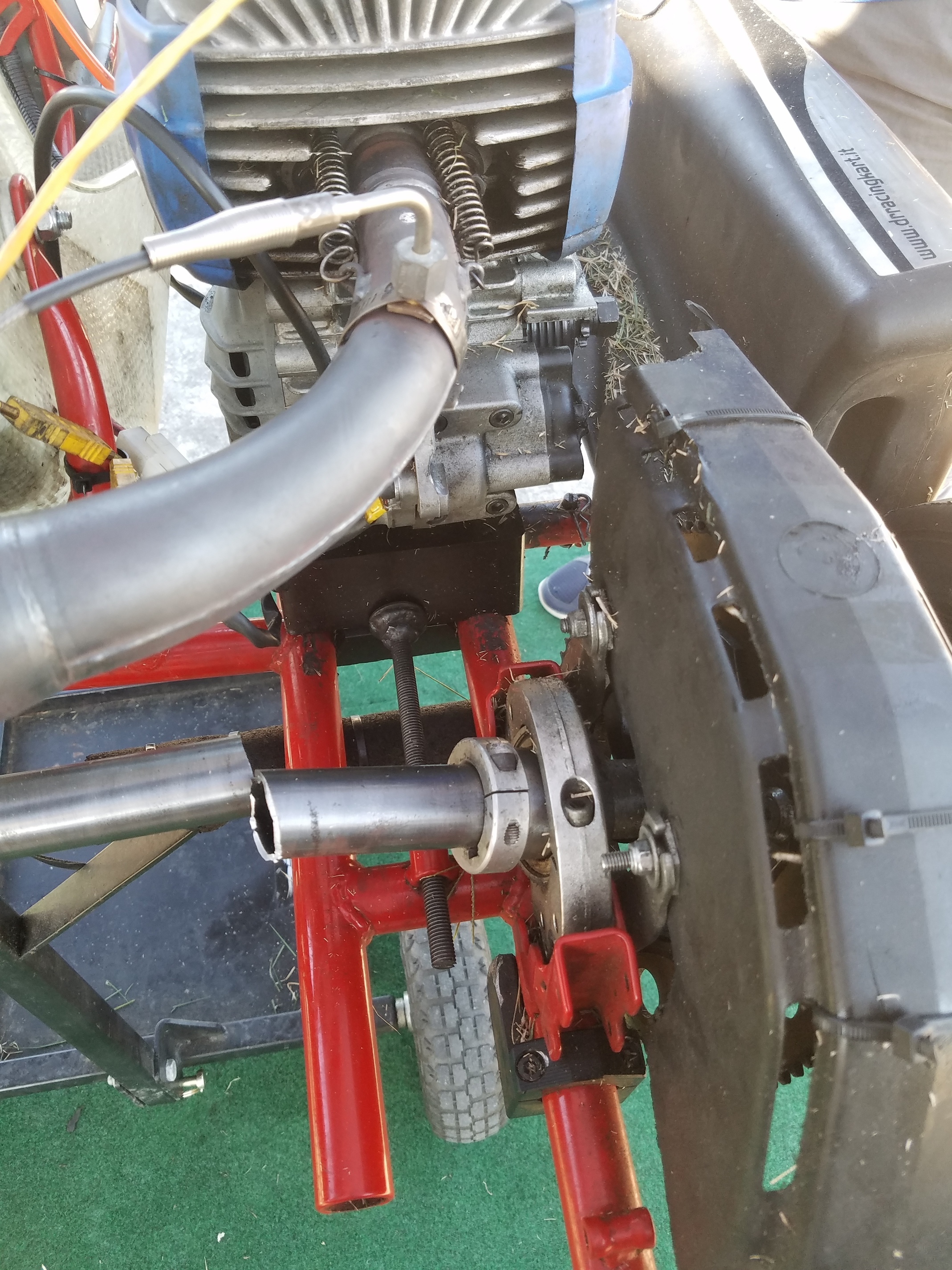 And her chassis cracked a few months back, possibly due to when another racer hit her in the front corner several races before. 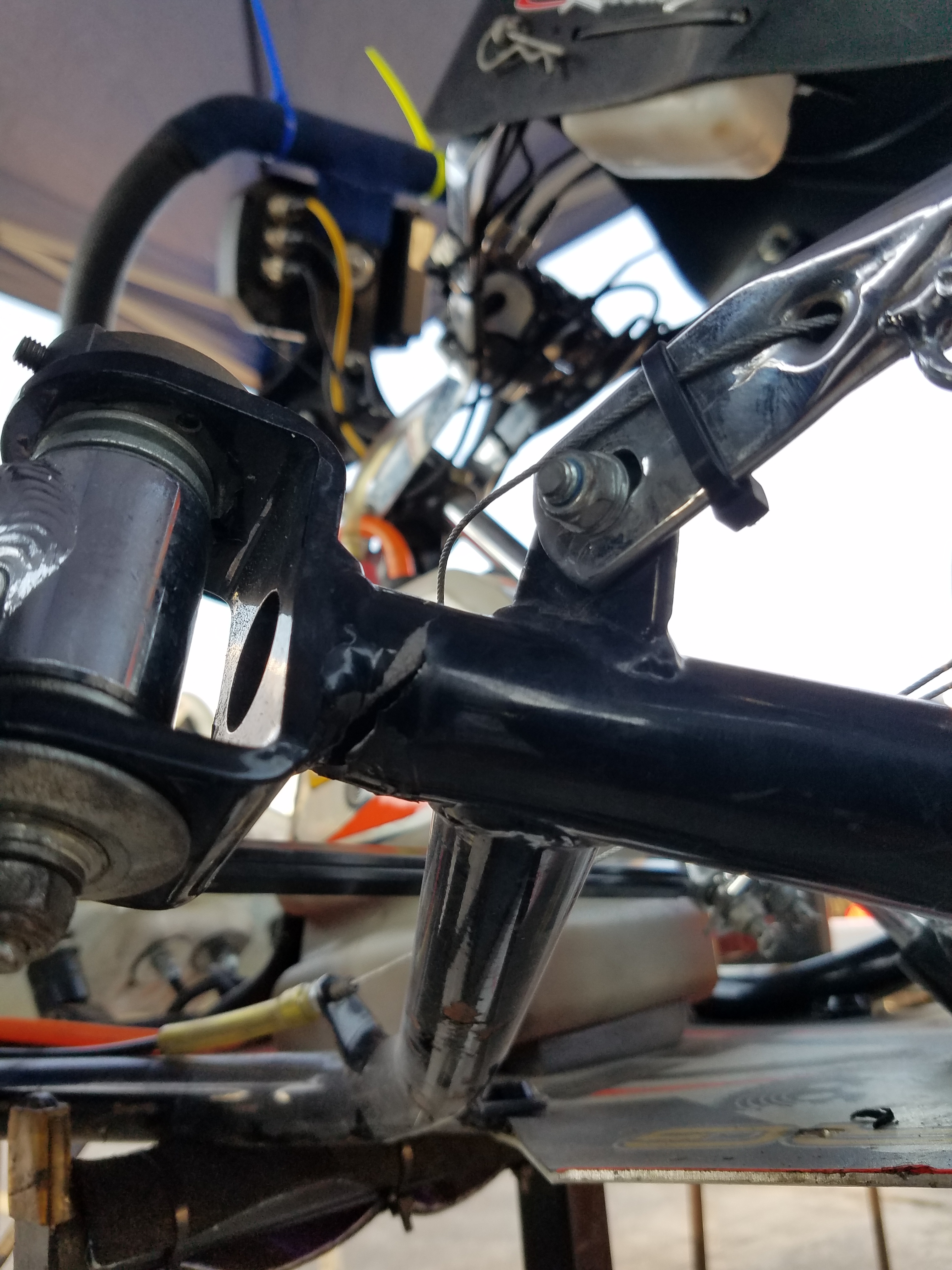 Its accident damage but what the hell. 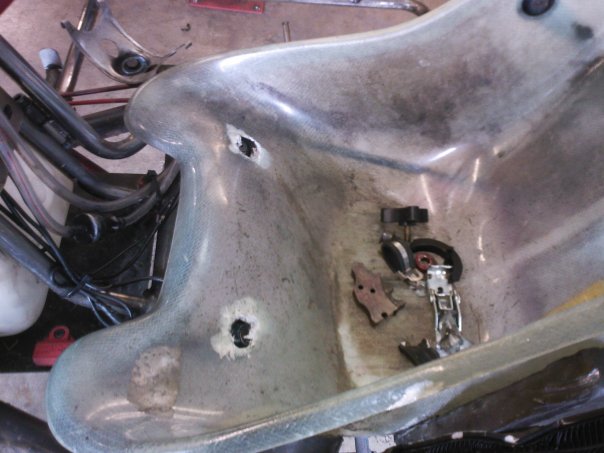 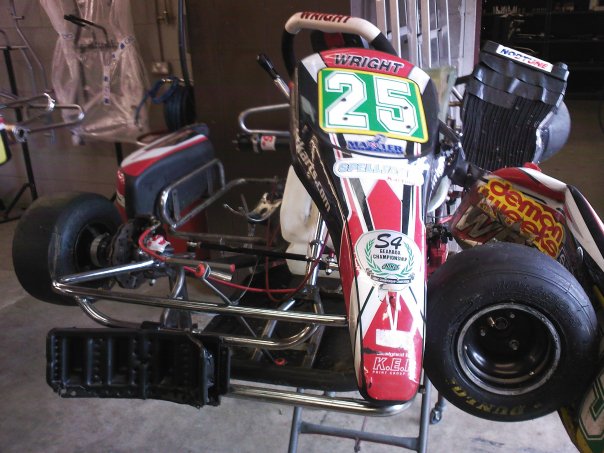 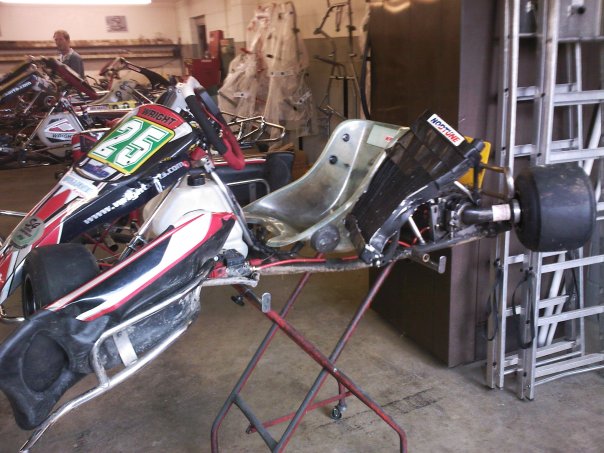 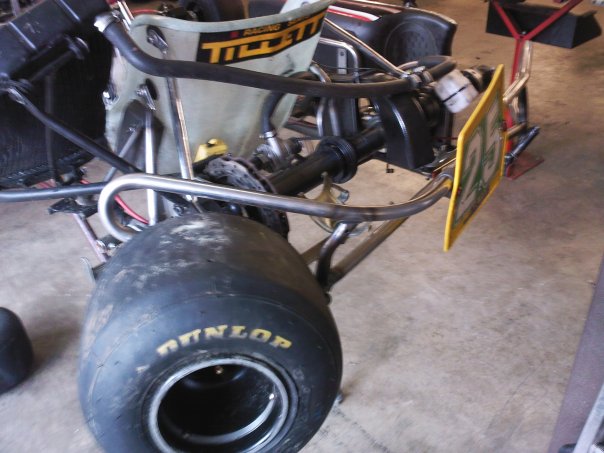 Can we get the stories related to these pictures as well?

This broke crossing over one of those huge gaps in the asphalt at willow springs. Kart suddenly started dragging the front end. This chassis was one of the non-ferrous 09 intrepids. Another time it broke the middle tube in an incident where I got brake checked at 65mph. 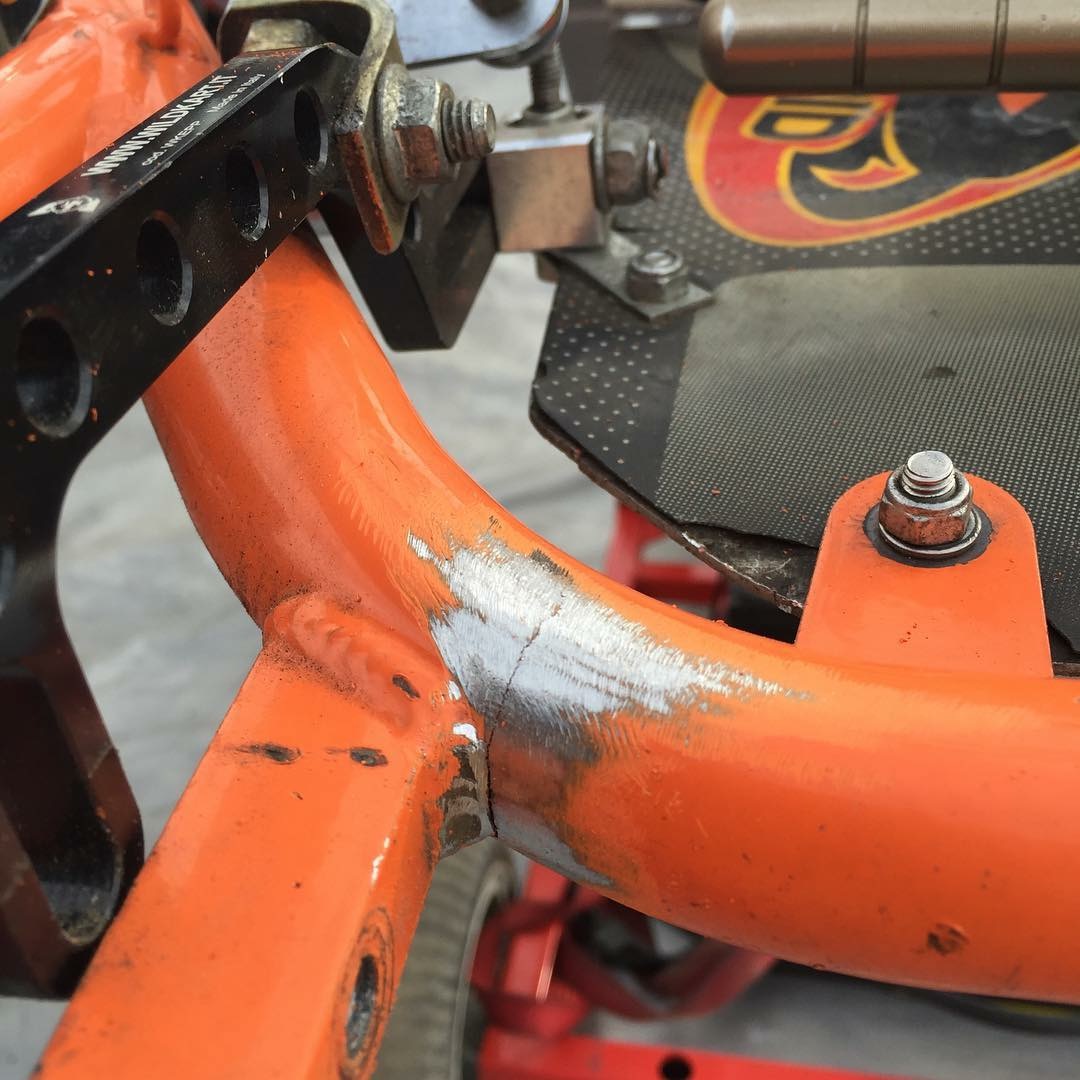 Sooo, this was a KZ and I had a Mychron 3 on to back up my speed numbers.

I was near the front of a practice session at the British KX Champs, going down the straight (which was very long). I pulled out to overtake the guy in front and while i was longside he whipped out to overtake the guy in front of him sending me off track into the (tire wrapped) start/finish marshall post just off track. Data showed I was doing 90mph when i got swiped and 60mph when i hit the marshalls post. Kart (and I) bounced back into the track where we got collected by 5 karts who didn’t really have time to slow down, I came out the kart flew through the air about 6ft up (i’m told), landed on the ground and got hit by 3 more karts (who had time to slow down).

So the aftermath was I had some bruises, scrapes and a cracked shoulder blade. Very lucky really. 3 drivers of the 8 drivers who had hit me quit because they thought they had killed me and one guy bit part of his tongue off (and got a ride in the air ambulance because he was bleeding from the mouth while i was making jokes). And my painted lid was ruined. My tuner at the time was a 40 year veteran of karting, had broken his neck, legs and pelvis karting superkarts and he thought it was the worst accident he’d ever seen and was physically sick at the side of the track.

Positives, first face I saw when they rolled me over was Nigel Mansell (he owned the track) and I apparently said “where’s the 'tache?”. Next race back (can’t remember if it was 4-6 weeks) was also the British Champs and I won that race.

Good lord what a story.

And another lesson, morphine does nothing for pain but makes you vomit when you come off it.

I have pictures of me as well after it but this is a family site.

I’d say go ahead and post them, I’m pretty sure I’m the youngest user here and I’m still a legal adult (barely)

Positives, first face I saw when they rolled me over was Nigel Mansell (he owned the track) and I apparently said “where’s the 'tache?”. Next race back (can’t remember if it was 4-6 weeks) was also the British Champs and I won that race.

You have some crazy stories man.