Who all are in or around Texas? I may have a trip coming up (Dallas) to inspect a Global 5000 for a customer to buy.

I was there (DKC) last year. I called em up and originally spoke to Mark French to arrange a two Stroke rental for the day. They were able to set me up in a vlr and, even, cooler, Jake French helped me for the day. They just happened to have bengios in stock when I was there as well.
Cool track! Basically call ahead to arrange something imho.

I tried calling ahead at DKC to arrange a higher hp kart but I guess I got the wrong person. I had to qualify with the base rentals to use the 206 karts. Nice enough track.

Ah. I made a point of letting them know that I had experience via discussion. Probably not a big deal. Do a couple laps in the putt putt.

Cheers, hope it comes off lol. I’ll give a shot to calling ahead, hopefully they’ll accept my CIK license

The folks I spoke to were Mike (owner) and Mark.

This gentleman seems to make many videos there:

Hey Richard, I live in Dallas. For an out of town visitor, I would definitely recommend DKC. Its open to the public and a great track, very flowing. Like @Zebug said, NTK is a members only track. Only way to get on track is to Join or Pay/Register for an Race Event.

I believe Mark has left DKC to start his own Kart Shop, taking son Jake with him. Mike Jones (Veteran Racer/Owner) is usually there. I would try to talk to him. Oscar (from the Video above) has a strong relationship with Mike and the guys at the track. You could reach out to him too via Facebook or Instagram. 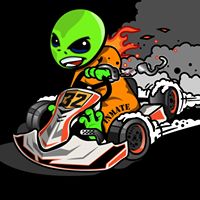 Illegal Alien Racing. 244 likes. This page is for anyone new to karting, thinking about getting started or just interested in it. Join me as I experience this fun ride!

When do you plan on coming out?

When do you plan on coming out?

Not sure, boss’ brother is looking to take advantage of the current crisis to bag a deal on a jet, he’s found a Global 5000 for the bargain basement price of 8.5m. We’re checking it out for him, looks good on paper next step if he decides to go for it will be to send a tech to inspect it and it’s documentation, maintenance records etc. That’s where I come in.