So, since I race in a TAG class with multiple engines, I’ve been wanting to understand more about how the engine histogram charts work, so I could see how I could better gear my engine and the engine characteristics of how my engine is running on a particular track.

Granted, it’s not really an area that I’ve spent much time on, so I was wondering if anyone else here on the forums have played around with it, for some general idea of what to start looking at.

This screenshot isn’t mine, but it gives you an idea. 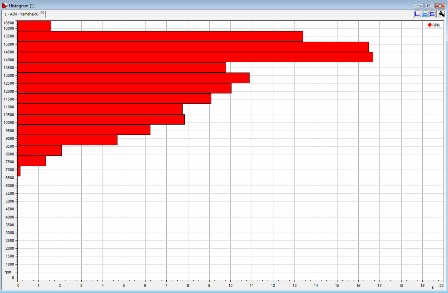 Side note on this, as I’m going to assume not a ton of people are going to have feedback here. I’m probably going to turn this thread into an open mind-dump on my thoughts in this area, as I’m just looking through it, until either 1) I connect up with someone to make a video on it, or 2) someone actually knows and stops my ranting.

How about another vid with roger? Those were good.

Yeah, I reached out to him about that, and I know he’s busy traveling. So when he gets back to me, we’ll see. Hopefully so.

In the meantime, using this thread to keep my mind on it.

I will often use it to see where my engine is spending the bulk of it’s time, at what rpm. Then you can gear up or down accordingly to get your engine into it’s most powerful rpm range. The histogram is way down the list of tools I use but sometimes use it when at a new track or using a new engine we are not familiar with. If you don’t have a Dyno sheet or power curve for your engine I don’t think it would be helpful.

That’s largely what I was thinking of using it for, was seeing if we were in the ballpark on gearing.