With the annual New Castle Motorsports Park “night race” taking place this weekend, I figured it would be fun to document the weekend. I’ll use this thread to post as I’m able to, and hopefully include some onboard video as well.

The night race is part of the NCMP club series, Kart Racers of America (KRA), and has developed into a really fun and exciting event. I believe this is the third year that NCMP has put on the night race, and it will be my third time racing. For anyone in the area, or that has even thought about racing at NCMP, this is a must-race event. The lighting setup is very nice, taking an area that would otherwise be pitch black, and illuminating it for a night of Friday practice (tonight!) and a night of Saturday racing! The first year had a couple of dark spots that made things interesting, but overall visibility was not an issue so long as everyone busts out their trusty clear visor

. Racing at night creates a pretty unique and thrilling experience. For me, it creates the perception that you’re going 15-20% faster at all times. I don’t have the best eyesight in the world, so maybe it’s just me, but either way it sure is a blast hitting 90+ mph under the lights!

I’ll be racing in the Shifter category for the third year, and I’m hoping this will be the best turnout yet. We had 13 shifter entries in 2020, and 16 in 2021. This year there are a couple of other races also taking place, and some of the locals I know have other obligations, so fingers crossed that we still have 15-20 shifter entries. KRA runs a single Shifter class that is a combination of Stock Honda (385 lbs), Rok Shifter (395 lbs), and KZ/175 (410 lbs). The KZ/175 still have an advantage even at those weights, but this seems to be the best solution at the moment for a single class trying to encompass all engines and all drivers.

The 2020 running was a tight battle between myself and my Harden Motorsports Group (HMG) teammate Devon Smith-Harden. Both of us were on Iame 175 SSE packages:

2021 was a good year for me, as I started at the back for the pre-final, and was able to take the win in both the pre-final and the final:

This year is going to be especially fun, as I’ve managed to convince my younger brother to come out of retirement and brap under the lights! Eric was last in a kart around late 2020 for a KRA club race, and his last race before that was July of 2017. Needless to say, he’s got some rust to shake off, but I’m looking forward to having him back on track.

We’ll be heading out to practice this evening, and plan to work out of the back of my truck. Tomorrow night we’ll be pitting with some friends. Feel free to message me if anyone else is out there and interested in popping by to say “hey”!

What kart you running?

Good stuff. I do love me some long format race reporting wether print or video. It’s the journey, not the destination yadda yadda. That being said crush them all.

Practice time! Getting my brother on track tonight, as my kart won’t be ready until tomorrow. We are breaking in his motor, so heat cycles have been completed and just one on-track session and we’ll be good to go. 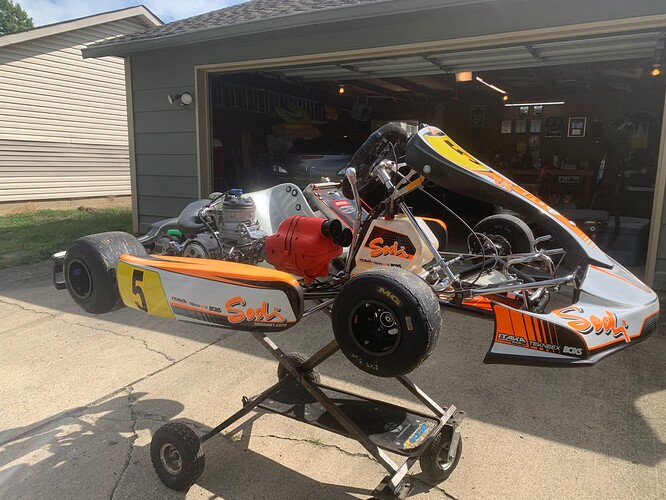 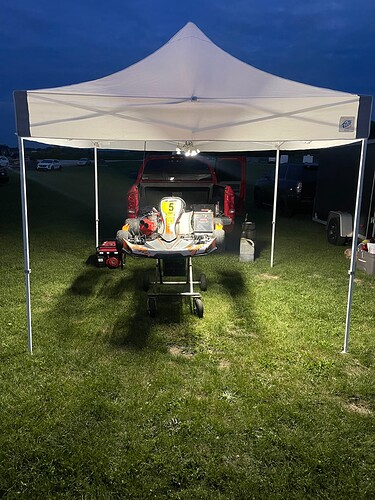 Looks like you did ok. Next year, FIA KZ Masters WC. The baby will love Europe.

I was super happy the rain went away last night!

A couple of LATE nights, but overall the weekend was a success. Spent Friday evening helping my brother break in his motor, and get up to speed during the three practice sessions under the lights. He made some good strides, and was within a second of another fast guy in the shifter class, even being way over the minimum weight.

Saturday morning brought a pretty bleak weather forecast. Lots of rain, and more coming based on the radar. I went down to pick up the kart I would be using, and had to drive back through a monsoon to get home. Saturday was scheduled to include two practice sessions before qualifying, but with the track being wet we opted to skip going out until qualifying.

Track was fully dry in qualifying, but still quite slippery, and a bit off the normal lap times:

I crossed the scales exactly at the 410 minimum, and my brother came through at 475 lbs. I was pretty impressed with his pace being only 1.3 seconds off pole! I felt good about my lap, but was surprised by a couple of things:

Feeling good about our pace, we moved on to the pre-final making minimal changes.

I got a terrible start in the pre-final, and fell back to 6th or so entering the first corner. I made my way through the field back up to third, but had lost a lot of track position vs. the top two, and my pace was no better than theirs.

The kart was not great for the pre-final, so I decided to make some changes including: caster addition, front width change, camber change, and axle swap.

Got a better start in the final, and it ended up being a 3-way battle from wire to wire. The chassis changes didn’t give me everything I wanted, but got me close enough to be able to take the win by 0.030"! 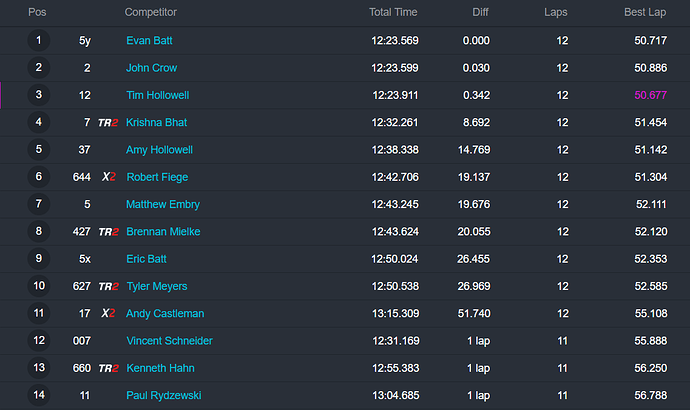 Here’s the link to my onboard from the main: 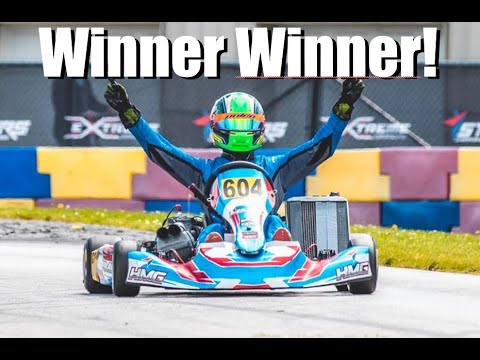 Night racing is so much fun.

tight field at the front