Our OTK Kosmic kart has been sitting in the garage for a few months. I just checked it over and noticed the inside of the cap of the radiator looks rusty? What is the best way to fix this? 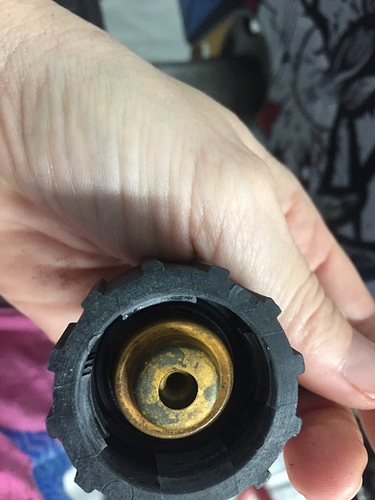 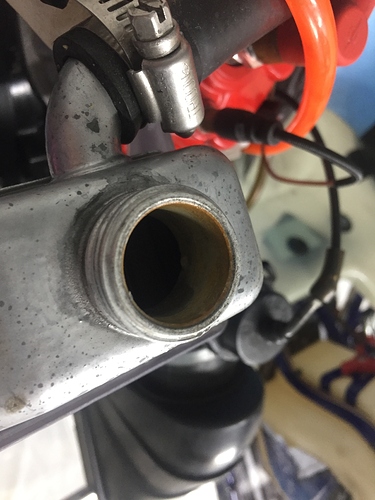 Not much you can do really other than a new cap. That said it doesn’t look as though it’s about to fall apart on you, I wouldn’t be overly concerned about the surface corrosion.

Are you using distilled water, or water from the house tap? Looks like mineral deposits. Looks like you have a Rotax, not sure where you would have a ferrous metal in the cooling system. Radiator is aluminum, and the cap appears to be copper.

It is a rotax indeed. We have not changed the water since we got it in December so not sure what kind of water is in it ( it is just water though, no additives in it). Is distilled water better?

I’d say yes, use distilled water. Water from the tap can have iron, calcium, lime…ect. And leave deposits in the cooling system.
https://en.wikipedia.org/wiki/Distilled_water#:~:text=Distilled%20water%20is%20water%20that,one%20type%20of%20purified%20water.

100% yes use distilled water. You are correct in that there are no additives, such things are prohibited by race regs.

If you’re going to be leaving the engine alone for a few months best practice is to drain it. That’s certainly the case with IAME and is mentioned in the user manual, I’d assume the same exists for Rotax

2 Things would probably work well to clean out the system are citric acid or deionized water.

I used to use a capfull of Water-Weter and Tap Water. After my last Top End rebuild, my builder warned me against the use at one of the local tracks. Secondly, he insisted I run Distilled Water only as there were some mineral deposits in the cylinder and head. He cleaned them during the rebuild, but suggested I check the radiator closely. Later when putting everything back together on the kart, I did as he suggested and shined a flashlight into all of the radiator openings. Sure enough there looked to be a fair amount of calcification on all of the little tubes that run through the core.

I have a small electric water pump that I plumbed up to the two fittings on the radiator, reinstalled the cap and used a 5 gallon bucket filled halfway with a distilled water and some CLR. I found heating the water as much as possible sped up the process of removing the deposits. I ran this solution through the loop until it reached ambient air temp again, then changed the water and CLR solution out repeating two more times. Most of the crud came out. For the last little bit I used a vinegar solution two times and the copper was gleaming again. Remember to rinse thoroughly with distilled water to remove any remaining solution.

Honda had an issue with some of their heater cores blocking up and that was there go to fix. My radiator is copper. You may want to look at an alternative to vinegar if you are using an aluminium radiator, as I have heard too strong of an acid can pit or possibly damage them.

That’s interesting, I can’t imagine running road racing without water wetter given a choice.
I guess a rad flush should be part of regular maintenance…

Surprised me too. Growing up around Road Racing, water-wetter was the go-to alternative. Antifreeze is obviously a hazard if you have an on-track spill. NTK and several other tracks in the area prohibit any additive including water wetter. DKC is the only one I am aware of that does not.