If my wife doesn’t like the new piece on my mantle, she can shove it! (I’m real tough when she is not around)

Have any of you purchased anything lately that would include you for membership? 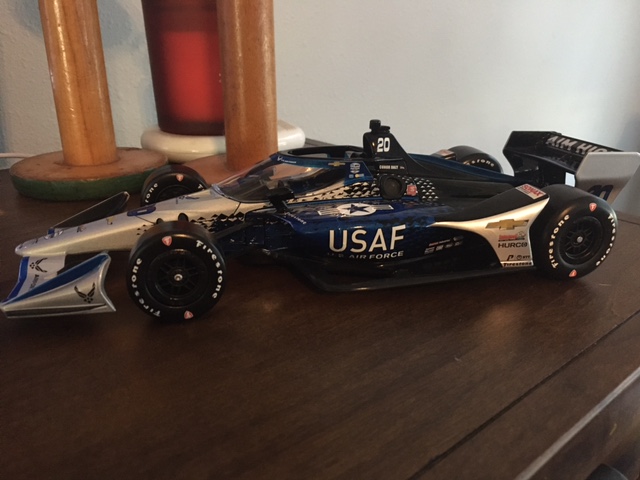 That little guy has her up in arms? Man I have car racing and karting stuff everywhere.

I guess my wife is extremely tolerant of my love for racing.

My art rock posters pushed her sensibilities farther than she’d like. 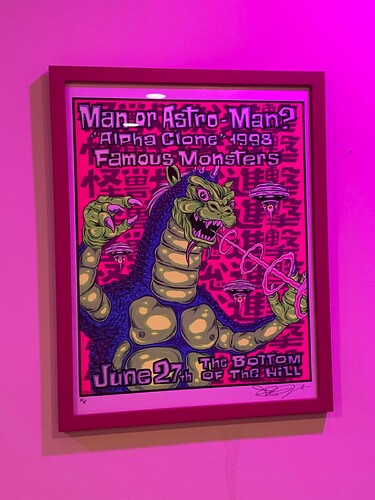 She tolerates my nonsense which is about all I can hope for.

Well our first date was at Malibu Grand Prix, and our second was a kart race, so she knew what she was getting into.

We just completed lap 31 a couple of weeks ago. She’s led most of them, but I tell her “I’m conserving my tires,” so she asked “The spare one?” Ouch!

Odds are she’ll outlast you in the enduro. Which is good.

So I was thinking about this and it seems to me that the basic gist is decorating our hangout spaces with cool stuff that may or may not be in the same taste as those who have chosen to live with us… so it made me think about the idea of the garage as a “hangout”.

I won’t use man-cave as that would exclude our lady racer friends and I bet the ladies would love a she-shed, too.

So I went to the internet and put in “garage hangout”. I wish I could throw down something like these with a dedicated sim space as well as wrenching area… 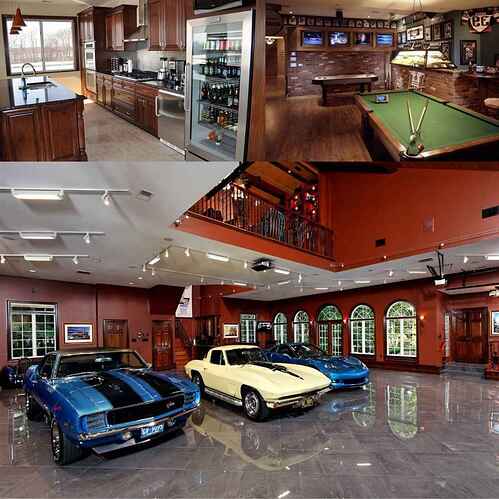 image1334×1334 150 KB
Personally I’d stockthe fridge with Joe Tea which is amazing and you should try their peach tea (cane sugar). 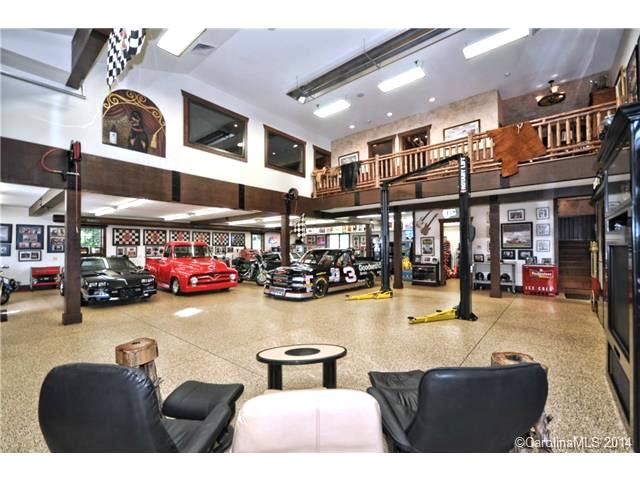 This has lifts, tools and space to wrench. It might feel odd draining fluids and stuff on such a shiny and clean floor. I like the idea of sitting in my lazy-boy, but instead of reaching for a remote, I just stare at my muscle cars instead. 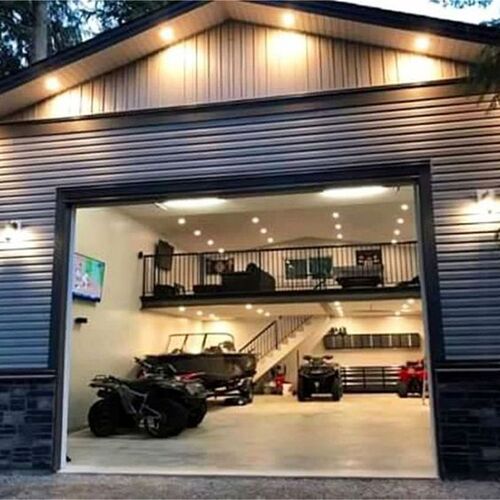 The bottom one seems mildly achievable. One does wonder about return of value on resale, however. It seems that cool stuff like garages aren’t universally appreciated.

That last pic looks really similar to a place on SR-9 that I drive by regularly to/from my home. Definitely a garage shop lower/upper home setup.

My dream scenario would be an oversized garage with room for karts/tools, as well as a home gym setup. Might as well keep the sim out there too, but our neighborhood is a historic area where the vast majority of garages are detached, so I don’t want to have to shovel snow to get to the sim 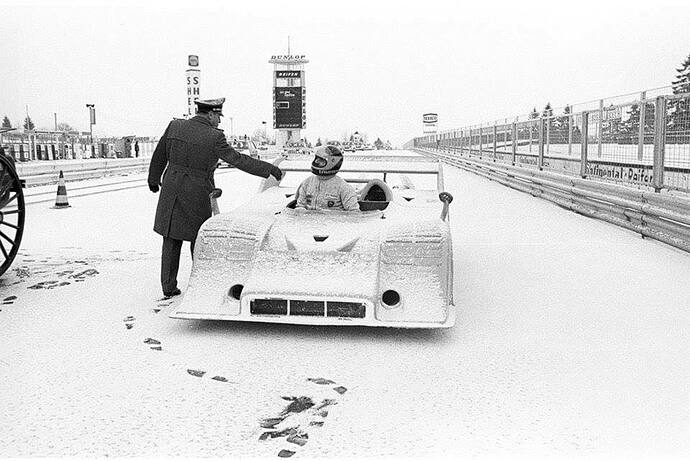 My wife showed me this last night…

The full article and more pictures are here: 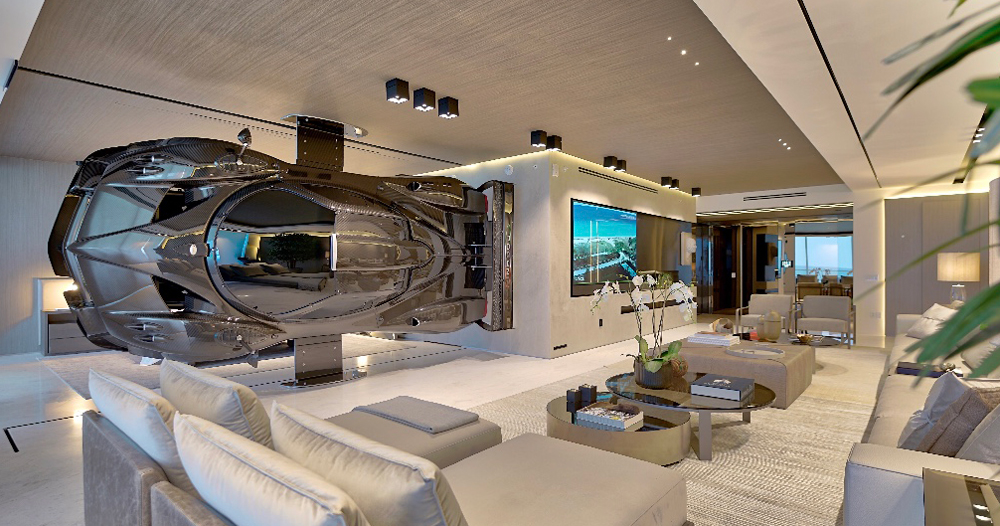 this miami residence is outfitted with a $1.5 million supercar mounted on the...

As cool as the Zonda is, I bet Warren’s would be a little red Ferarri Barchetta on the wall. 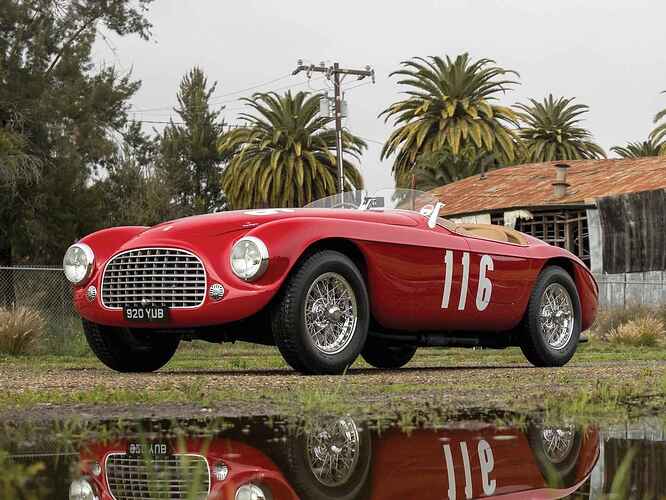 This Porsche? photo is oddly beautiful. It kind of looks like the uniformed guy is a cop handing the racer a traffic ticket.

“Sir, in Canada we require, by law, winter tires. Here is your ticket. Dont let me catch you drifting in the Tim Horton’s parking lot again.”

Also this from that Miami residence: " the powerful, 800-pound race car". That is pretty incredible, if accurate. Take that thing down off the wall and drive it. (I am assuming he/she has 2, actually).

It kind of looks like the uniformed guy is a cop

Or the old school team manager saying to his driver "Vas is los? Schnell, back in z seat; you vill stay in z car and continuing testing… I don’t care if it’s snowing and the car weighs 1,800 lbs with 1,200 HP.

It would seem that most of us would prefer more garage space than living space or an incorporation of the two would our spouses permit. It reminds me of the place my Uncle moved to when he left South Florida.

He purchased a old John Deer Dealership building out in the country in Northern Tennessee. It had been converted into a Living Space and a Garage Space. Imagine this…Single story dwelling with approximately 1800 sqft of living space at the front attached to a 4000 sqft Garage Space including Fabrication, Vehicle Storage and Dedicated Paint Booth at the rear.

The lot was close to 2 acres, so there was plenty of parking for Haulers (including his Coachmen Pusher) and Trailers (yes, plural) as well as their daily drivers. He was not a Wealthy Man, but rather spent his earnings doing what made him happy and was functional. It wasn’t much to look at from the outside, but left your jaw gaping when you saw the inside. Never mind the Classic Cars under covers. It was the Race Room that got your blood pumping. Everything was partitioned out giving each space a character of its own. Apparently winning at Regional Drag events can not only pay the bills, but put a few toys in the stocks to boot. Rest his soul, he did it as right as any of us could.

I recall a photo I saw on the Porsche forums from a guy’s home,. It was the perfect (to me) incorporation of a garage and his lovely ranch style home. The car was pulled into what you’d consider an atrium that was a functional part of the home and transitioned rather seamlessly into the living space. The beauty of it was the consistency in architectural style, the car was prominent and visible from the interior and exterior, but the “garage” was basically invisible, it blended in so nicely. It seemed to be a really nice compromise.

I’ve somehow convinced my soon to be fiancé on a barndominium (well really just a shop that happens to have a couple places to sleep) she likes the look and “vibes” whatever that is and well I want all the workspace. However we’ll have to see how it all plays out in the end

Imagine this…Single story dwelling with approximately 1800 sqft of living space at the front attached to a 4000 sqft Garage Space including Fabrication, Vehicle Storage and Dedicated Paint Booth at the rear.

This sounds like the dwelling version of a mullet haircut.

How’s this for a barn garage? 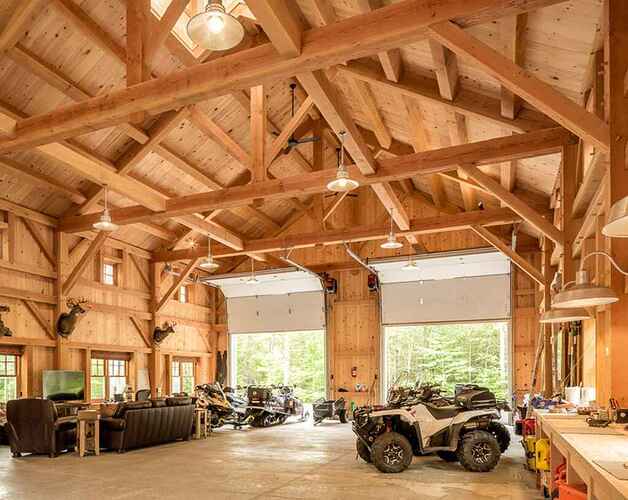 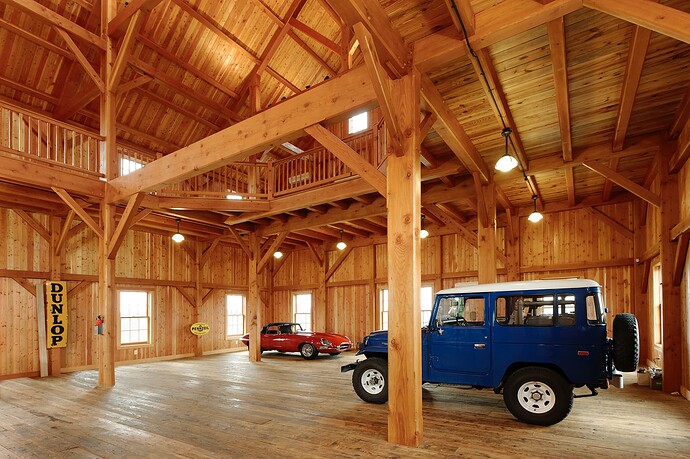