Does anyone know if there’s something that can be set to emulate the effect it had on the kart ?
Was it harder for the rear to lift the inner wheel or easier with 143cm rear width ?
The kart is an IPK

To really advise, you would have to determine why the wider rear track width was faster, because as track conditions and all other variables change, there’s no guarantee that the wide track would be faster again on a different day or track condition.

A wider rear track width will reduce the rate of inside rear wheel lift, so if that’s what you’re after, there are plenty of things to try. The first and easiest would be to narrow the front track width. You mentioned it felt more stable, which is probably the correct assessment in general. When the inside rear lifts less aggressively, it’s more stable and easier to drive. That doesn’t always equate to faster though, it depends on all the other variables at play.

But there are other components to what a wide rear track will give in terms of handling, so something else might be a better adjustment to get you where you want.

When diagnosing any handling issue, break the corner down to its three parts; entry, apex, and exit. If you can identify what it’s doing in each phase of the corner, you can still down to the root of the problem and really determine what the kart needs.

I would start by taking the caster out and going to neutral. Kart sounds like it reacts too quickly at turn-in. Could also lower rear ride height.

How far off the pace are you? What is your weight distribution looking like?

If seat position is correct it might be time for an axle change.

Last time i checked i was a bit off on the right front but to be honest i dont really weigh to much as i’m already around 3kg over weight so i cant really play with weights.

What axle hardnes are you suggesting ?

I’m with TJ on this. Reduce caster, then try low rear ride height. If those changes don’t get you where you want to be, you could move the seat back 1cm, which would also put you at factory baseline (from google search): 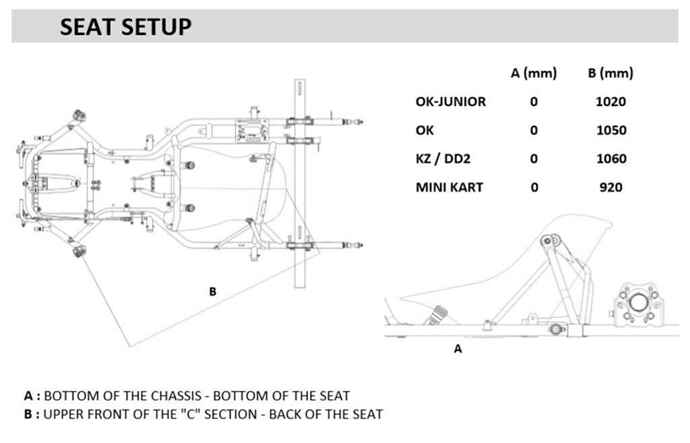